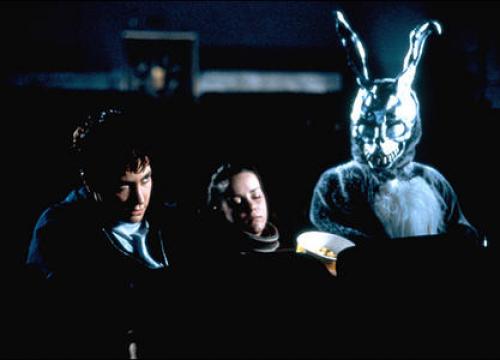 Selecting a soundtrack to a film (from existing songs, as opposed to a score composed for the film) is an art in itself. For every scene where you want music used, you have to find a song that conveys the mood, isn't so trite that it bores the audience, doesn't jolt the audience out of the narrative flow, and is still good enough to be enjoyable on its own. For one example, Quentin Tarantino has established himself as the master of soundtrack selection. But we won't rave about him this time.

The final song, the one the credits roll over, is the one with the most weight on it. Now you have to sum up the whole film with this song, and especially the mood of the ending. Here, we're going to pay tribute to those final soundtrack selections that do an exceptional job of that. And WARNING, we have to discuss the ending, so these might be spoilers!

What else goes with Kevin Smith better than Weezer? The disaffected Generation X likes both the grungy, geeky & off-the-wall style of Weezer, and the cock-eyed and obnoxiously nerdy humor of Smith. It's an exclusive little cult just for the little nomad generation - if you don't get it, it's not for you. And if you do get it, it's as light and frivolous as a day at the mall itself.

And now it's Generation X's turn (albeit an early flurry). It isn't just that Radiohead's the perfect band for the end of a modern Shakespeare tragedy. It's that composing music to go with carrying away the bodies after a double suicide is the exact purpose for which Radiohead was called into existence. Radiohead manages to make the most dreary sorrow in aural form, while the mood is kept in check - almost as if you wanted to cry but you can't because your feelings are too dulled down from years of Ritalin, so you just make this kind of slack-jawed aw-shucks face.

For the mind-bending ending to this very, very weird film, even just the title says it all. This cover of the Tears For Fears song has vocalist Gary Jules sounding more like REM than REM does, with that frail, vulnerable waver in a voice that frames sadness in a child-like perspective. Go to bed and hug your teddy bear (or better yet, your stuffed rabbit) and dream about how we're tiny insects in a universe that stomps all over us, and how we'll never figure out one-tenth of what's going on, but we know there was something there we could love in a moment if only we looked hard enough.

For this period piece about the Vietnam War, the Rolling Stones' hit of 1966 is such an obvious choice that it blows everything else away. Except, of course, for the brilliant counter-mood set by the soldiers singing the Mickey-Mouse-Club theme on the way back to base. If you listen to the lyrics of "Painted Black", doesn't it sound just like the singer has really lived through the madness of war as a combat soldier?

Everybody go "Awwwww!" You'd think star-crossed lovers who have to be separated for life would be a downer ending. So why this upbeat, positive song? Well, you see, they get to have an emotional affair and yet delude themselves that they're both square because they never consummated it. Then they go back to their lives with new perspective, having just packed a lifetime's worth of emotional exploration into a few days on vacation. That cab ride is full of optimism and looking out the windows, looking forward. They do the right thing and have their bittersweet memories that are more sweet than bitter.

Disney tried their darnedest to make sci-fi back there, with sorta-fantasy flicks like The Black Hole and TRON, but none other than WALL-E counts as their first solid science-fiction film. Nevertheless, for a relatively sterile story about steel machines who played a pivotal role in the human race's distant future, you need to have a warm, fuzzy ending so everybody knows it's going to be alright. This song, positive and progressive, does the perfect job of bringing that story in for a graceful landing.