8 Awesome Parts of Leonard Nimoy's The Ballad of Bilbo Baggins 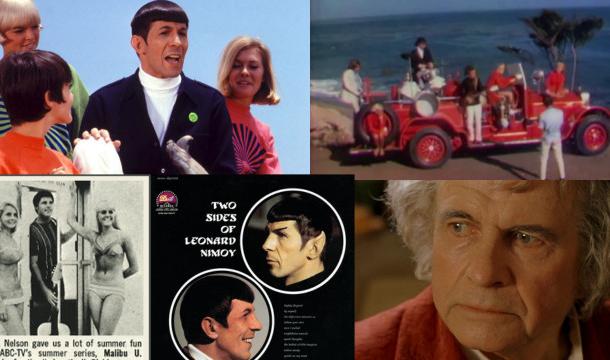 Leonard Nimoy is trending lately, which just gives us this excuse to publicly stan his brief, but distinguished, singing career. Starting with the album… 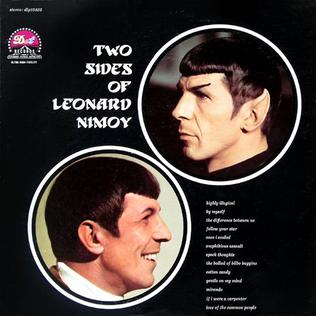 After his earlier hit album Music From Outer Space (1967), Leonard Nimoy followed up with this project, Two Sides of Leonard Nimoy. Once again we see the playful way he set off his typecasting, driving it into fans' heads that he's not Mr. Spock. As any vintage film and TV fan can tell you, Nimoy had a prolific career before Star Trek, as did most of the Trek cast. So we can see where you'd find it irksome to be remembered for just that role.

This album bore the world the magical "The Ballad of Bilbo Baggins," based on Tolkien's famous work that would later become Ian Holme's most celebrated role. 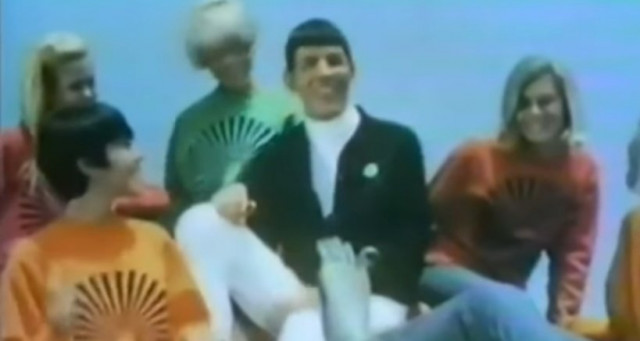 The dancers in this video are outfitted in these knock-out printed sweatshirts with each in a different primary color. They're just too groovy to the max, you know? Then they march off in color-wheel spectrum order to show off their dance moves. They don't make 'em like they used to. 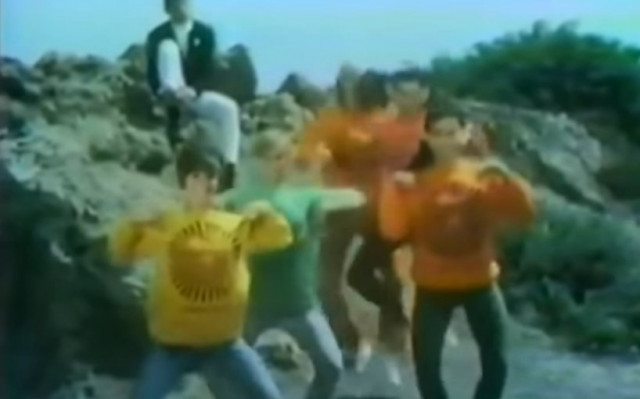 If you only know Hobbits through the Peter Jackson trilogy, your first encounter with this 1968 conception of them might be alarming. This dance is actually based on interpretations of the literature at this time. Though The Hobbit had been published back in 1937, it was already breaking ground as a beloved classic some three decades hence, but still before Hollywood caught Hobbit-fever. Ralph Bakshi's The Lord of the Rings was still a decade in the future, the Carter years of 1978.

In yet another odd production choice, some of the kids wear large construction paper buttons with handwritten slogans. The one in this picture reads "Admit Middle-Earth to the U.N.!" Others worn by Nimoy himself and another kid read "What's a Leonard Nimoy?" and "Hobbits unite!" At the time, they played up Nimoy's current Star Trek gig (season 2 TOS was filming at the time of this video), sort of like they were trying to tie the 2 fictional universes together.

Note also that Nimoy is almost identical in appearance here to his Mr. Spock role, neat as a pin but not in uniform. Of course, the kids sport Vulcan ears, because people tend to do that around Leonard Nimoy. 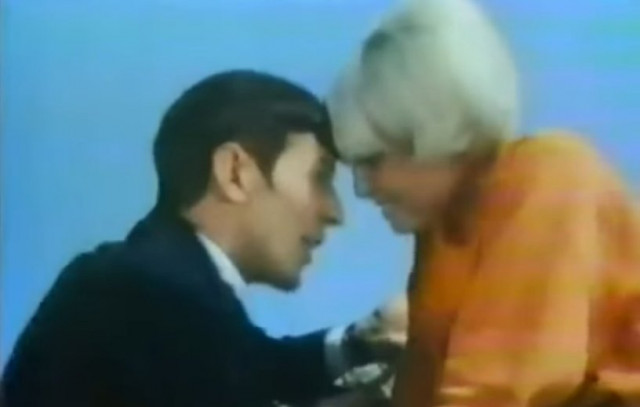 Nimoy hoists himself up a rope to climb up to the kid perched above, only to playfully boop heads while he goes on lip-synching his lyrics. His role of Mr. Spock, as a half-alien with quasi-psychic powers, gets just a hint of a reference here. You can tell Nimoy had the time of his life filming this. 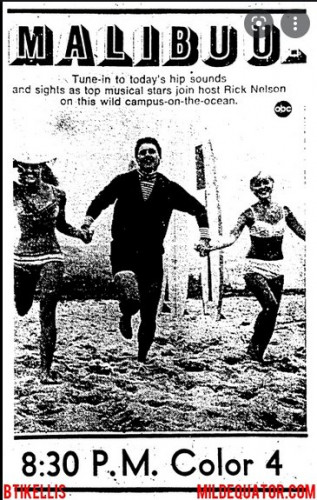 No, we're kidding, it doesn't really qualify as the first music video in history. If you define "music video" loosely enough, they go back to the beginning of camera technology. This was a promotional song coincided with the release of the aforementioned album, produced for the ABC variety show TV series Malibu U. If you view the amazing intro from this show, you can guess that they filmed the show in Malibu, California, with an amazing collection of prop cars from every decade of auto history. The primary filming was done at Leo Carrillo State Beach, right on PCH. This was also used as a filming location in everything from Grease (1978) to Attack of the Crab Monsters (1957). 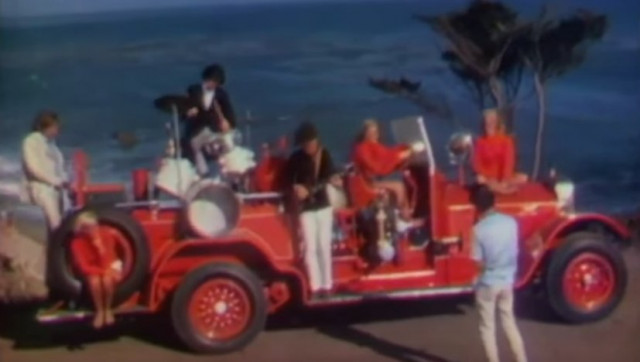 [7] Malibu U Also Hosted The Doors' Light My Fire

You might want to tie a scarf around your head so your jaw doesn't hit the floor, but The Doors themselves were also guest stars on Malibu U, which was more of the American Bandstand of its day. You can tell it was aimed at a teenage audience. Seriously, surfing, the unspoiled California beach, and beach-side music videos filmed every week? How come this show even got canceled?

Many more famous music acts of the day were on Malibu U. They include Marvin Gaye, Dionne Warwick, Buffalo Springfield, Don Ho, Paul Lynde, Neil Young, The Turtles, to name a few. The show was also hosted by teen heartthrob stars of the day, Ricky Nelson and Annette Funicello. So yes, dig into some music history and find someplace to stream all 7 episodes of this show, it's worth the hunt. 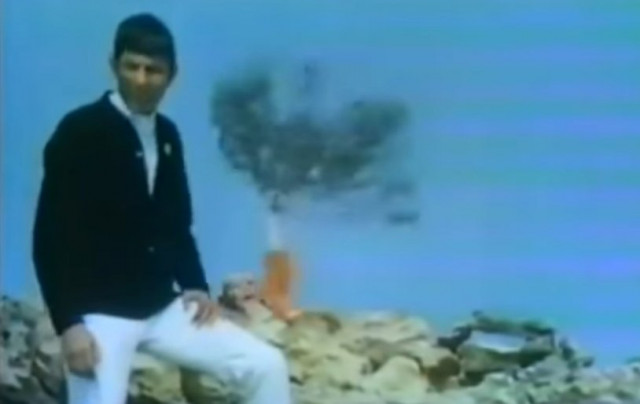 [8] Leonard Nimoy Almost Gets Clocked by a Shoe

In the song's bridge, Nimoy's lyrics describe several events from The Hobbit:

> "Well he fought with the goblins!

> "He riddled with Gollum!

Meanwhile, the kids are all squatting behind the sand ridge acting out the action in the most hilarious and hammy way. They end up throwing bushes, branches, and several articles of clothing, punctuated by stunts like popping their head over the edge with a Gollum impression that will steal your heart. Neigh about the minute-28 mark, you see Nimoy lean back slightly while an article of clothing whizzes past him. It's close to the camera and mostly a blur, but we're going with "shoe." Right after that a hat sails even closer to Nimoy before the scene cuts to kids dancing, so maybe that was a hit?

Join us next time on Lyric Interpretations and maybe we'll dive further into Malibu U if the fate warrants.