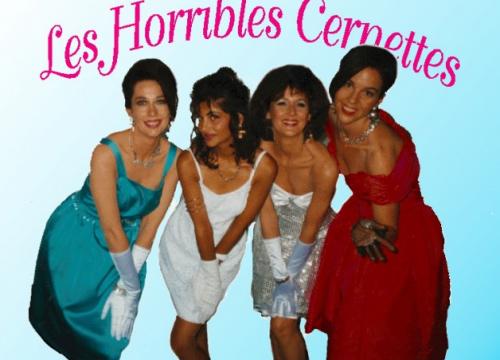 Meet Les Horribles Cernettes, the unofficial "patron" group of CERN laboratories. We would love to think that we don't have to tell you why CERN is important to the Internet, but in case we do: CERN, along with making the Large Hadron Collider, was the home of Sir Tim Berners-Lee, the founder of the World Wide Web, who ran the world's first website from a NeXT box in his office.

Les Horribles Cernettes are billed as "the world's one and only high-energy rock band", by virtue of the fact that they sing about "colliders, quarks, microwaves, antiprotons and Internet". That also puts them in standing for geekiest band ever. But in context, they're an all-female parody-pop band (with a doo-wop style), so probably if they ever do make it into the charts, it'll be with a novelty hit.

You wanna hear them? Here's their first hit, "Collider":

More can be found at the Les Horribles Cernettes YouTube channel.

Among many honors they have is having been the subject of the first photo posted on the World Wide Web, when Berners-Lee asked a colleague for photos to post on his webpage. So the Cernettes' publicity photo was scanned in on a Mac and transferred via FTP, and up it went.

In addition, all the members of the group are also employees at the CERN project. The lead of the group (songwriter and lead vocalist) is Silvano de Gennaro, an analyst at CERN's computer science department. Here's an interview with de Gennaro, at the end of a BBC podcast. The band's line-up also currently includes Anne MacNabb and Vicky Corlass, but there's also a smattering of past members identified on the press section of their home page.

You might wonder how much lineage there is directly between Tim Berners-Lee's handiwork and what you're running right now. Well, consider the history of web browsers. TBL's own browser software was first named "WorldWideWeb" in 1992. The following year, Marc Andreessen built upon this design to release NCSA Mosiac, an improved browser (it ran on Unix only, at first) which became the first dominant web browser and led to his founding of the company Netscape. Netscape spawned Navigator - which eventually became Mozilla and later Firefox - while Microsoft bought a license for NCSA Mosaic through Spyglass, Inc., and developed that into Internet Explorer. So there you go, the two most dominant browsers today traced all the way back to the beginning!