A Spin Around the Block With Frank Zappa's "Joe's Garage" 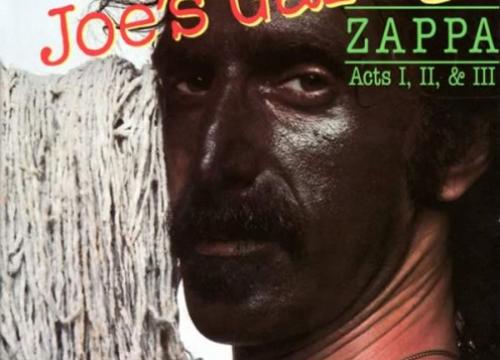 You'll laugh. You'll cry. You'll tremble. You'll expand your vocabulary. And be warned, your mind will forever be a little bit dirtier than it was before you heard Joe's Garage. NSFW (not-safe-for-work) warning and spoiler warning duly noted.

Joe's Garage is Frank Zappa's one-and-only full rock opera, although he did several concept albums and other projects of musical mythology. Like any work by such an extremely popular and cult-like figure who's long passed away, there's a lot of free-floating theories about this work out there, most of them wrong. Let's get some interpretation going...

Our story is a dystopian future, in which music is about to be made illegal. In fact, the government's mandate is that "all humans are criminals" and it is merely the Central Scrutinizer's job to constantly invent new laws to then convict everyone for breaking them. So it's in the same spirit as all sci-fi dystopian works, like Nineteen Eighty-Four and Brave New World. In fact, what with all the robot sex, there's a good dollop of cyberpunk there as well.

As with just about any Zappa album, there's wholesale stinging satire and parody of institutions and lifestyles big and small, including organized religion, totalitarian government, censorship, pop culture, the music business, United States culture, and everything else Frank could mow down. He was a busy man with a busy mind, so the whole album could not be said to be about any one thing as much as a grand tour of his favorite soapboxes. If we must generalize, you could play it on a double-bill with Urinetown, which has an awfully similar spirit.

Let's pick up our plastic megaphoine and clear up an emerging - and highly unsettling - misconception circulating around the Internet lately:

FRANK. ZAPPA. WAS. NOT. A. LIBERTARIAN.

Politically, he was more of a progressive liberal, but he could not be labeled and would be quite offended were he to be alive and find his name being pasted with the labels it is today. But if you must hear it from the horse's mouth, turn to page 315 of The Real Frank Zappa Book and read it with your own eyes: "Politically, I consider myself to be a (don't laugh) Practical Conservative". Yes, this is the same guy who, only pages earlier, issues a curse to the Religious Right of the Reagan era, worded thusly: "May your shit come to life, and kiss you." So now that we have that myth cleared up, we hope you'll spread the word the next time you see John Birchers and Stromfront posters trying to claim him for their camp.

While we're quoting books, Kelly Fisher Lowe's The Words and Music of Frank Zappa has it that Zappa got criticized for his earlier song "Jewish Princess" (from Sheik Yerbouti), so he wrote "Catholic Girls" as an answer to say, "Fine, they're slutty freaks, too!" Then he either ended up writing the whole opera Joe's Garage around that song, or just chucked it in. For a guy who composed 53 albums in his lifetime, understand that the creation process was a somewhat disorganized one at times. So, throughout the other mockeries of sexual excess, also remember that Zappa once told an interviewer that people need to laugh more about sex.

Now for the plot synopsis:

Act I (aka the fun part)

The Big-Brother stand-in Central Scrutinizer presents the whole opera as a moral tale to teach the evils of music. He starts with Joe, who has his happy days with his humble garage band before the neighbor (Mrs. Borg - no relation to Star Trek) calls the police on him. Counseled by the police to seek out church-oriented recreation, Joe dates a Catholic schoolgirl named Mary, who soon dumps him to become a groupie for a band called "Toad-O". We then follow Mary's fate for awhile; various exploits of a profane and vulgar nature ensue, and Mary ends up having to win a wet T-shirt contest in order to afford a ticket home. Meanwhile Joe, dumped and depressed, has sex with a fast-food worker who gives him a weird venereal disease, which drives him to seek out religion.

Act II (aka the weird part)

Joe ends up at the First Church of Appliantology under the tutelage of pastor "L. Ron Hoover" (we don't have to explain who this is a parody of, right?). On the good pastor's advice, he is steered into kinky sex with appliance bots - at a nightclub for such activities, no less. This is a good time for your word for the day:

So Joe is happily plooking away at "Cy Borg", a "XQJ-37 Nuclear-Powered Pansexual Roto-Plooker", when he goes too far with it and breaks it by... ugh, just listen to it yourself, we're not spoiling that part. As punishment for this act, he ends up in the brig, but it's a special prison for people in the music business, where the days are spent snorting lines of detergent and the nights are spent just the way you think prisoners spend their nights, with lots of non-consensual plooking going on, most of it to Joe's dismay.

Act III (aka the bummer part)

Don't look for happy endings here. Years later, Joe is released, only to discover a completely changed world with no music or joy left in it. Music is now completely illegal, and so Joe goes home to mournfully go mad, hearing the now-long-lost Mary's voice in his head, and dream about music one last time. Then, he presumably either goes mad or gets on medication, because we leave him a broken man at a muffin factory squeezing a green rosetta of icing onto muffins on an assembly line.

You could almost hear the last line of Nineteen Eighty-Four echoing over this; Winston Joe has won the battle over himself. He loves Big Brother the Central Scrutinizer.

Now, at the time of Joe's Garage (1979), Iran was making headlines with its revolution, where the Islamic republic under Ayatollah Khomeini outlawed music. Zappa makes reference to this event in his liner notes, but once again, you can see that this whole opera is not just about Iran. Zappa was subject to repeated censorship and government harassment in his lifetime, and remember that this was before he became the whipping boy for Tipper Gore's PMRC hearings. Zappa is pointing to Iran saying "look what could happen right here in the USA!"

Musically, the album prominently features Zappa's trademarked technique of lifting elements from previous recorded works to re-phrase and reference again. You'll recognize many lyrics and hooks from other Zappa tunes, and future works such as "The Muffin Man" reference this as well.

Go forth and enjoy!