Avril Lavigne's What the Hell - Finer Than Mickey 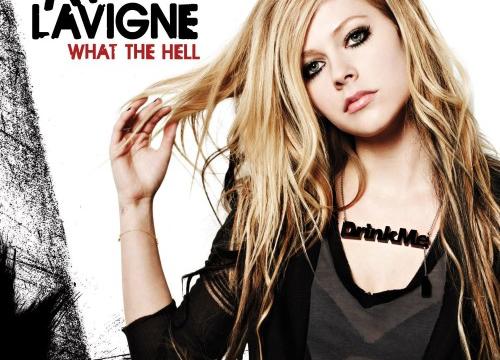 When we say "finer than Mickey," we of course mean Toni Basil's pom-pom-spinning 1982 single "Mickey." Wait, what does this have to do with "What the Hell"? The critic Gil Kaufman, doing his gig over at MTV.com, said of "What the Hell" that it has "a rousing cheerleader energy." Boy, does it ever! "Mickey" was the first thing we thought of when we hit play. Saucy, sassy, spirited, peppy, and as catchy as potato chips. Somebody finally remembers every now and then that pop music is supposed to be fun.

So, yes, cheerleader energy. It goes further than that, Gil, right to the roots of grrrl-power ballads and bubblegum pop. And when we say that, we say it with the utmost respect. After all, readers who might be tempted to think of Toni Basil as a "one-hit wonder" need to remember that her main careers were choreography, directing, dancing, and acting, and that she did "Mickey" as an afterthought, presumably just so she could show her performers 'look, see, this is how I want it done.' She worked with the likes of Bette Midler, David Bowie, Talking Heads, and George Lucas, and has had a career spanning the stage and the silver screen. One-hit wonder? Honey, please, that turned out exactly the way she intended it to.

So Avril Lavigne's "What the Hell" gets compared a lot to her previous hit single "Girlfriend," and though some might be tempted to dismiss this as "oh, look, she's being derivative already," we're more tempted to think that she did this just to nail it down: Look, I'm serious about this energetic pop music thing! After all, if she does it just once, it looks like an accident.

The video is chock-full of bad-girl metaphors - imprisoning her boyfriend, going Grand-Theft-Auto on a taxi, crashing it, and gate-crashing a basketball game and a venue. And she didn't even pay for those clothes. Hapless Boyfriend chases her down the streets like a lost idiot, all goofy-eyed and getting hustled. The guy'd better have a lumberjack neckbeard going on, because otherwise he'd be so de-emasculated that he'd have to beg her permission to pee. Of course, the whole thing is about her chiding him for not bein' da man and taking care of her in the first place, so she wouldn't have to run around.

Anyway, bratty girl has fun and makes video, film at eleven. She's not the first, and she won't be the last, but she's definitely right now.