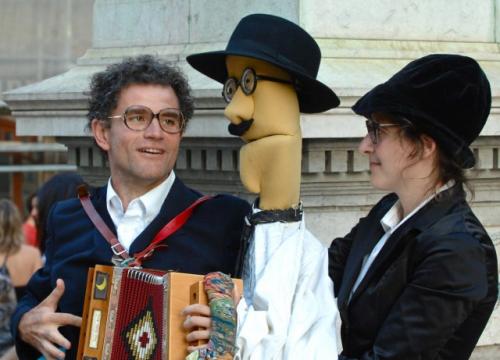 It doesn't matter if you have a heart carved from solid obsidian refrigerated in liquid nitrogen to -200 Celsius. It's still going to be warmed by the thought of a musician husband and wife team. Sigh! They must spend their days trilling together like songbirds, writing lyrics, playing together on the piano... What could be more romantic?

Herein, we pay tribute to the most famous first couples of music. Although the reality isn't quite going to live up to the fantasy - couples who form a band together are just as likely to spend their time passed-out drunk in anonymous hotel rooms or having slap-fights over who slept with who while touring. But hey, it's still kind of romantic, in a punk-romantic kind of way!

John Lennon and Yoko Ono. There, we said it. Next? Oh yeah, and Paul McCartney and wife Linda... Next?

There's also Ike and Tina Turner, in the troubled relationship that made headlines for Ike's abusiveness.

Harry Chapin's hit "Cat's In The Cradle" has wide crossover appeal for a reason... the lyrics were written by his wife Sandy Cashmore, and he set them to music.

From the band Blondie, we have Chris Stein and Debbie Harry. Through thick and thin, They founded Blondie and were riding high before the band collapsed around them and Stein came down with a hideous skin disease (it's called 'pemphigus' and if you Google the images, don't say we didn't warn you). Through that and mounting debt, the couple did separate, though Harry says it was purely from the stress. They continued to collaborate after splitting.

Married to their manager: Celine Dion, Pat Benatar, Ozzy Osbourne, and the late Ronnie James Dio all had this in common, as their spouses managed or produced for their career.

A couple of couples: Both ABBA and Fleetwood Mac were composed of double-dating couples. In Mac's case, it famously tore the band apart when one of the couples split, while ABBA simply faded out to a happy ending.

Blackmore's Night, the current band of rock legend Ritchie Blackmore is formed with his partner in life, Candice Night. They're a Renaissance-themed folk rock duo (ironic, considering that back in Rainbow Blackmore split with Dio over Dio's fascination with fantasy themes).

Johnny Cash and June Carter. Not only were they both musicians (although June was more in the manager role), but they were married for 35 years before dying only four months apart.

And finally, an example that stands the others on its head... The White Stripes gives us Jack and Meg White, who were married and divorced before they made it big. They also (shudder) claimed in many interviews that they were actually brother and sister. Regardless, they continued to keep the band together for eleven more years before they called it quits. We shouldn't question the Strips, however, because they're just that original.