The Stories Behind Some of the Weirdest Music Videos 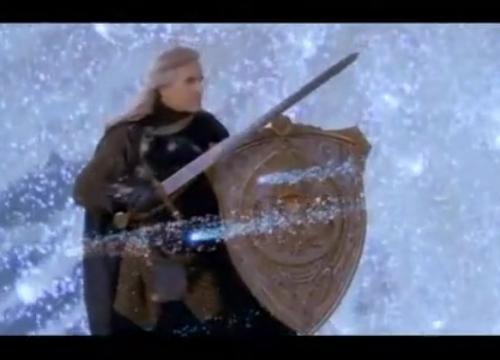 School finals got you down? Escape into these intriguing fantasy worlds, each less than ten minutes long, that are fascinatingly bizarre flights into minds from an alternate dimension.

Honest, we didn't want Lady Gaga in this list, but she threatened to claw our eyes out with her screen-wire nails if we didn't. This video, best described as possibly what David Lynch might imagine Stanley Kubrick's erotic fantasies to be like, was directed by Francis Lawrence (also directed I Am Legend). Gaga declared that she wanted a director who'd basically take her ideas over his own and that's just what she got. By the way, the video purportedly tells the story of Gaga being taken into white slavery, being sold to male bidders, and then taken home by the winner. Sort of.

(I Wanna Be A) Lifeguard - Blotto

So, it's August 1st, 1981, and you've just run out and gotten MTV. This is your first day watching it. You turn it on and see... this. Welcome to the '80s - it's gonna be a long decade! The band is Blotto, their lead singer is Sergeant Blotto, and if their video looks a little amateur, that's because they never thought to make one. Instead, some kids doing a film-making project for their college senior year (doubtless inspired by Night Flight) made the video for about $11, and the band said "Hey, why not?" They didn't even have permission to film on the mall escalator, they just showed up and did it and nobody knew what they were doing. They did get permission from the shoe store. And it went up on MTV because it was their first broadcast day and they had to play something.

Just because it nommed the 1987 Grammy for "Best Concept Music Video" doesn't make it any less weird. Now, it hasn't aged well, but just ask some old person what it all means and they'll be happy to break it down for you. This epic puppet opera was made by Peter Fluck and Roger Law, the two designers behind the British ITV series Spitting Image, which used the same style of puppetry. Like the show, the video is a work of harsh political and cultural satire. By the way, keep an eye out for the following pop culture references: Wallace and Gromit, Chariots of Fire, Star Trek, Superman, The Shining, Bedtime for Bonzo, 2001: A Space Odyssey, 1984, Rocky and Bullwinkle, and Jurassic Park. Pardon us if we missed a few, but we have to get on with the other songs or we'll be here all day.

Shine On Me - Chris Dane Owens

It's like Peter Jackson had just enough budget left-over at the end of Lord of the Rings to throw out a music video, but everybody was too tired by then to pay any attention to the actual content. Or if you mashed up Eragon with Tears for Fears! Actually, Owens just had that much money to burn and pretty much crammed every cheesy fantasy cliche he could think of into it because - well, how else are you going to preserve a song that otherwise would have been forgettable album filler for a sparkly '80s glam pop group? Except this was made in 2008. We wouldn't even know this guy existed if Cracked.com hadn't named it #1 in their "Six Worst Professional Videos". Try to play this and see if your cat and/or dog can even stand to watch it without edging out of the room in embarrassment with a paw over their eyes.

Is this what happens when you give Stephen King acid? Well, consider that The Birthday Massacre was originally named "Imajica", after the Clive Barker novel of the same name. So "Blue" was their debut, and it's still finding new fans on the industrial/Goth circuit. The video was directed by Dan Ouellette, who has done other videos for this and other groups. Obviously this was a pricey production for them. Keep your eyes peeled for several persistent horror film themes, and the association between the carpet and the maze and The Shining (where the carpet is the maze) is just too nagging not to mention.

The one that started it all, this avant-garde masterpiece was the original weird music video, made not for MTV, nor even Night Flight, but Saturday Night Live in 1980. Yes, that's Bill Paxton. Art Barnes in Greg Prato's MTV Ruled the World (don't you wish you had a copy?) gives the valuable advice: "If you think it's easy putting false eyelashes and lipstick on fish heads... think again!" He also relates how they reveled in the low-budget, low-tech production, wanting it to "look scratchy and be a bit disturbing, while still serving that nursery-rhyme-type melody". Co-creator Alan Hunter called it "bizarre and under-produced and art school", invoking the art graphics MTV would later use as bumpers in between videos. Eat them up, yum!