A Beginner's Introduction To Frank Zappa 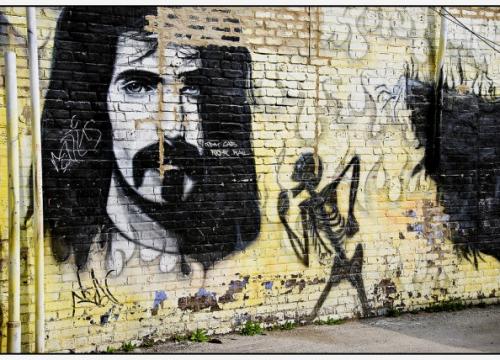 You are about to read something very straight, sober, and serious, without a soupcon of hyperbole: Frank Zappa was the God of Music, and while lesser talents than he (all of them) be wise and inspired in the way of music, Zappa was actual divinity. No, wait, this isn't coming off right. Let's say it like this:

We could pick the highest, hottest, and moodiest volcano on planet earth. We could carve Zappa's likeness into it, soul-patch and Pancho-Villa mustache and all. And we could dedicate it as the altar to Zappa. And if we did that, and then every day at the first ray of sunrise, a naked virgin ran up the side of that volcano and flung herself screaming into its searing heart as an offering to Zappa, and if we continued to do that for all of eternity, we would never have paid sufficient due to the God of Music for gracing humanity with his perfection.

But anyway, we could go on all day. but you're a busy reader, so we'll get right to the point: Because Zappa left such a huge, mind-bogglingly vast body of musical works behind, newcomers to Zappa are often perplexed. They always ask something more or less along the snout of "Which songs should I listen to first?"

This is an important and vital question, because when you pick the wrong songs to listen to first without getting advice from any of your peers, it makes your head melt into orange goo and stick to the carpet. The music police crash through your breakfast nook and haul you away. Your dog will never speak to you again.

Anyway, because the social media generation doesn't wipe its butt without consulting five Facebook pals on the direction of wiping and how many sheets to use, we will engage in a futile practice known as an "FAQ", a document with the definitive answer to a frequently asked question which, once set down for the search spiders to find, will be ignored for all of eternity by social media users who will continue to repost the same dumb questions again anyway.

So... A Beginner's Introduction To Frank Zappa. Follow these instructions carefully, listening to the songs in this exact order:

"I'm the Slime" - Keep repeating the song until you can come out of a dead standstill and lip-sync the mid-point line "That's right folks, don't touch that dial!" flawlessly.

"Let's Make The Water Turn Black" - For this one, silently use your imagination to conjure up the kind of TV sitcom that this would be the opening theme to. Would it have a "couch gag" like the Simpsons had? Also marvel at how some idiot on the PMRC thought that the line "mama with her apron and her pad" referred to a hooker wearing a maxi pad.

"Jewish Princess" - Repeat until you know all the words, until you can sing along out the car window at the top of your lungs.

Now from Broadway the Hard Way:

"Planet of the Baritone Women"

Now go back to Sheik Yerbouti:

"What Ever Happened to All the Fun in the World" - Repeat until you can mime along to every sound effect.

Now for We're Only in It for the Money:

This is your first entire album all by yourself. Do not take drugs, repeat, do not take drugs. Just play the entire album in order on a loop. Do this for days. Revisit your old friend "Let's Make The Water Turn Black" now in context. Space out on the reprise "What's the Ugliest Part of Your Body?" On the third replay, follow along both sides of the mumbling at the end of "Flower Punk" (the two monologues are on different speakers; do NOT cheat and fool with the balance). Wherever you are in your day, drop everything and slip into a choreographed soft-shoe at "Bow Tie Daddy".

This is a triple album and it's all instrumental, not a word out of his mouth, so you're challenged here. This time, it is important that you do the opposite of what we've been telling you to do and listen to the songs IN THE ORDER OF YOUR CHOOSING. Do not listen to all three albums all the ways through, this is dangerous stuff. Make up your own little track-hopping pattern. Keep it secret. It's your password in the afterlife.

Now back to Strictly Commercial:

First play "San Ber'dino", then "My Guitar Wants to Kill Your Mama", and then "Trouble Every Day". This time, your exercise is to ponder how you would fit all three songs into the soundtrack of your own film. Would it be a '70s-style car-chase caper? A zombie flick? A bank-robbery heist? Fit action scenes to tempos, and pick another song on this album for the opening and closing credits.

Now you're ready to advance to level two: Piquantique, another all-instrumental one. Just play the whole thing a couple of times - like Captain Beefheart (who was Zappa's colleague and sometime collaborator), it sound random at first and then it comes together and makes sense. You can replay your favorite track a couple of times.

Next: The Yellow Shark album. Again, buzz through it a couple of times. Replay a track if you fancy it. You're at an advanced level, so you can stop following track order safely about here. These are the orchestral pieces Zappa wrote, and it was the last album released before Zappa was called back to the Heavens, to which he bodily ascended from the roof of the Fillmore.

Now freely pick any double-album from the You Can't Do That on Stage Anymore series. Just sit back and cruise. You will recognize several songs and pieces by now, but in different form. That's because, like The Grateful Dead, Zappa and his orchestra never quite played the same piece the same way twice. You'll also notice about this point that he liked to design modular pieces. One song might serve as another song's ending over here, and be its own stand-alone piece over there. And still other instrumental bits are all-purpose transitions between any two songs. Don't break your brain trying to separate each piece. Even advanced Zappa scholars can't keep up with every wily trick.

OK, that's a pretty smooth take-off. From hereon, oh happy-happy day, you're ready to listen to ANYTHING after just one! more! album!

Freak Out! - The whole thing, start to finish. Read the liner notes - reverently. This was the very first album Frank Zappa ever released, and from here you can clearly see his roots. Ponder the influence of doo-wop, blues, avant-garde, bebop, classical, jazz, and all, and study each of the forms on this album. Later on, if you can ever stand to listen to another artist again as long as you live, take some time to look up some of the influences he lists there.

That's it! You're a level 3 Zappa fan! Now just keep picking things at random. but remember to be careful exposing this stuff to others. Except minors: children can safely listen to anything by Zappa, because they are still pure and innocent and their minds are not welded shut by the boring conformist tedium of the anthill we call society.