Hiding From Plato in The Cave, by Mumford & Sons 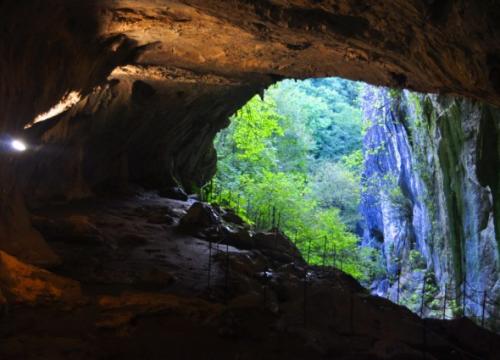 "The Cave" is a 2009 hit single that has a tendency to stick to playlists like velcro. It keeps getting air play and buzz and posted in fans' top-favorites list almost as if it just came out fresh this month. While it only charted as high as the middle-top-40 here and there, it definitely found its niche. Just as with the band; Mumford & Sons isn't for everybody, but they have a tiny, tight following that's as loyal as a puppy.

It's lyrics are almost graphic. It's a song of defiantly struggling through turmoil, with a hint perhaps that the singer is doing this to encourage another down-trodden wretch. "The Cave" in the title sounds like a self-made prison of despair from which the sufferer must be coaxed "walking on your hands" if need be.

But this is a folk band we're talking about, and a pretty cerebral one at that. They come from England with banjos and mandolins. So we'd better pay our respects to the literary reference that gives the song its title.

If you haven't heard it yet (college campuses not being your natural habitat), Plato, the classic Greek philosopher, had this nifty little idea called "The Allegory of the Cave," where we humans' existence can be compared to being bound in a cave where we have nothing but a wall to stare at, and the shadows we see on that wall cast by the fire behind our backs are all the basis we have for determining reality. In other words, we people are some pathetically stunted things, like baby lambs barely able to perceive the glories of the universe around us and perhaps condemned to live out our whole existence in a state of continuous delusion, with only the occasional glance at the reality of the world for solace.

Oh, dear, that got existential fast, didn't it? The idea has roots elsewhere than ancient Greece. Buddhists take all the world around us for an illusion that brings us pain and turmoil, and "The Cave" suggests that a large part of the cause of someone's suffering is indeed an illusion. That's what 'nirvana' (the concept, not the band) is, is the final freedom from the illusion of life. And elsewhere in the East, Hindus have the concept of 'maya.' Maya is "the limited, purely physical and mental reality in which our everyday consciousness has become entangled."

There's a pretty little legend about maya, in which an ascetic, Narada, came across a crystal-clear pool of water that enticed him. So he called upon the god Vishnu to explain it to him, and Vishnu told him that it was Maya. Narada asked if he could dive into it, to which Vishnu cautioned "Listen, I'm a god, and even I don't know the depth of that thing." But Narada insisted, so Vishnu let him have a dunk. Narada dove in and became a princess, born into a royal family, and over the course of decades lived a life of growing up, marrying, and having her husband conquer a kingdom, before a war broke out within the family that killed all whom she had loved. In despair, she killed herself, and fell back out of the pool as Narada again. He'd been in there for one minute, and Vishnu asked him, "Who is this son whose death you are bewailing?" Yeah, now you know where David Lynch got the idea for Lost Highway.

Anyway, "The Cave" is one deep song. Be careful exploring it; you don't know how far back it goes.