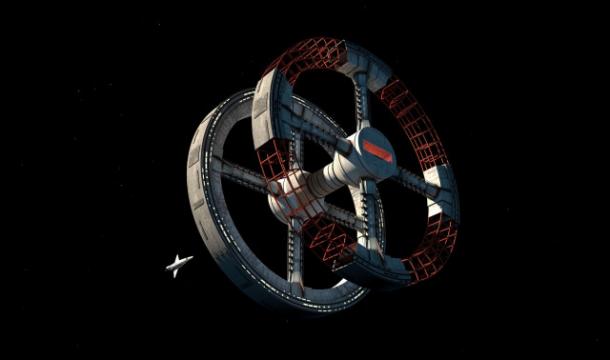 On April 2nd, 1968, the world met Stanley Kubrick's interpretation of Arthur C. Clarke's 1951 short story The Sentinel. And we've all been confused out of our minds ever since. Rock Hudson walked out of screenings whining that he didn't understand it. And everybody agreed with him. Almost 47 years later to the day, nobody will now admit that this movie is anything less than profound.

One problem is that 2001: A Space Odyssey is now the canonical hipster flick. Fans like to pretend that there's more there than there is; it is a movie, not to enjoy, but to act smug about as you condescendingly explain to your companion how they just don't get it. The bourgeois masses have this as their esteemed "deep movie," whereas to those of us who take our coffee black, it's trivial. 2001: A Space Odyssey is to deep movies what Pink Floyd is to progressive rock, what Fifty Shades of Gray is to the BDSM subculture, and what, well, Starbucks is to people who take their coffee black.

But what a movie, and what a time to be released! One year later, man would walk on the moon for the first time. The very first Unix operating system was being cobbled together and programmed by Ken Thompson and Dennis Richie. Woodstock was still a year away. And what a disappointment the actual year 2001 turned out to be. No sentient computers, no manned trips to Saturn, no bases on the moon, and most especially no benevolent aliens leading us by the nose to cosmic enlightenment. If this were truly "one of the greatest films ever made" endquote as 80,000 reviews on IMDB assure me, you'd think they'd be a bit more accurate about the future.

Here, here's the whole story: Once upon a time we find a black box on the moon. It turns out aliens leave beacon devices scattered around our solar system to lead us on like Hansel and Gretel following crumbs across the stars, because for God's sake it gets boring out there in space so let's play with these monkeys the way you'd use a laser pointer to play with a cat.

Wait, what about HAL 9000? That was thrown in later. The monkeys who find the first one on Earth? That was thrown in later too. The computer going whacky and killing off the crew until the one guy fights back? Thrown in. "Daisy, Daisy"? Thrown in. None of that was in Clarke's story, the Wiki Cliff's notes right here. And no, HAL isn't a clever cypher for IBM. That's yet another urban myth attached to this movie.

Now, standing on its own two feet, the movie is still good. It is certainly a masterpiece of visual art and Kubrick's magnum opus, as far as film-making goes. It has about as much in common with Clarke's initial point as it does with the Federal Deficit, but for thrown-in, made-up-on-the-spot subplots, they did a better job turning a short story into a long film than, say, they did with The Cat in the Hat. It captures breath-taking ideas better than the standard run-of-the-muck skiffy.

And unlike most of you; I like long boring shots of docking space capsules. Space travel is like that, and I'm tired of hearing zaps and pows and Tie Fighters going boom when they blow up. There. Is. No. Air. In. Space. Sound need air; no sound, no air. Are we clear now?

But wait, what is the meaning of the film?

Oh, that's easy. Aliens leave bread crumbs because they're cosmic zookeepers, and the monkeys showed promise of one day being worth talking to. So they left the first black box to make the monkeys' brains grow, the second black box on the moon which would activate as a cosmic pager to signal them if the monkeys ever reached their satellite, and the far-out black box on Jupiter is a Smart Monkey Trap. Walk through the motive process: "Let's violate the Prime Directive and give these chimps a mental boost. And if it works, we'll know because they'll trip our alarm on the moon. And then we'll catch one and experiment on it when it gets to Saturn."

No, really, they wanted to catch a live specimen of an evolved human. That's why the HAL 9000 went bananas, and why it killed off all but one of the specimens. You get the idea that they do this on every life-supporting planet they come to. Which, you have to admit, does make a lot of sense to do it that way. I'll award the Larry Niven trophy for Believable Alien Without The Rubber Forehead For A Change.

So the psychedelic stuff is the best way to show that actual contact with a fearfully advanced alien is mind-blowing, man! Oh, and if you happened to bring a sheet of blue microdot to the theater, now's the time to drop it.

I don't like the core message that humans are such hot stuff that aliens can't wait to meet us. I don't like to project human motivations onto unimaginable aliens. If we ever do get to explore space (if we can break free of the shackles of superstition long enough to actually pay attention to science, that is), like as not we're going to find life out there all right... bacteria, and some more bacteria, and one planet that evolved a complex system of lichens, and dusty remnant of life forms that used to be on another planet, and some more bacteria...

Get it? We just can't seem to bring ourselves to imagine extraterrestrial life form without making them humans with superpowers. The Greek philosopher Xenophanes said that if horses could carve statues of gods, their gods would look like horses. We do that. Our gods turn out to be bearded humanoids in flowing robes who wake up in the morning, go to bed in the evening, and micromanage humans' day-to-day lives like a child playing with a doll house.

What we mean when we say "sentient life form," is something just like us. And right now, in the category "most advanced humanoid life form," humans have won first prize yet again, maintaining our 3.2 million year winning streak. Yeah for us. Well, we may be all there is! That's right, sit down and face right now the possibility that by our standards, there has never been and never will be a life form superior to ourselves. We can keep making up as many stories as we want.

But as far as the universe goes, what might count as "supreme beings" probably won't even fit our description. That's fine; we're sure that ants don't care about our definition of a supreme being either. Ants would think of an ideal supreme being as a taller ant. Do you think that's trivial? Well, a far more advanced life form that ourselves would think our frame of reference just as trivial.

What we do care about is that a blank canvas like this movie can at least provoke the occasional thoughtful discussion. So yeah, love your 2001: A Space Odyssey. It's deeper than Star Wars.

...but not THAT much deeper.