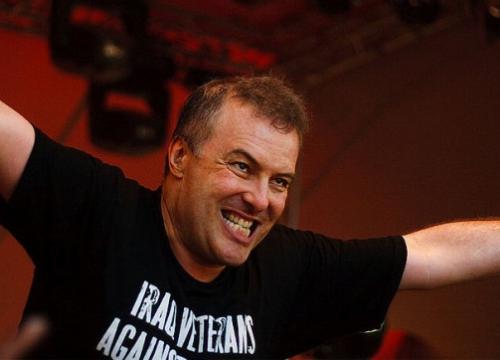 Oh, sure, read all about Jello Biafra, longtime lead for the Dead Kennedys. On what? On a BLOG! Using the INTERNET! That's right, use your IBM computer running Microsoft Windows to go through Comcast Internet so you can read about how cool this anti-corporate intellectual terrorist is. You know what that makes you? A TOOL! A TOOL of the SYSTEM, just ANOTHER SHEEP! You want to pretend like you're all concerned about the big social issues of today, but if you REALLY cared, you'd be helping Ralph Nader get elected president by writing protest letters to your congressmen using a manual typewriter with 100% biodegradable hemp paper... Wait, where were we?

You know the only time Jello Biafra got married? That was to Therese Soder, lead singer for The Situations (another punk band, of course) on Halloween in a graveyard in a ceremony conducted by a personal friend who got ordained as a minister of the Universal Life Church just for this. And then they had a wedding reception attended by Black Flag and D.O.A. And then he divorced her five years later. Because he's Jello Biafra.

Jello Biafra has campaigned in politics, on the platform of civil rights, social justice, economic populism, boosterism, anti-corporatism, peace movements, anti-consumerism, environmentalism, anti-globalization, universal health care, gay rights, anti-capitalism, abortion access, feminism, and the separation of church and state. First for Mayor of 'Frisco in '79, then for President in 2000 (he probably actually beat Bush if you count the votes right), and since then supporting Ralph the Nader for 2004 and 2008 and you can bet he'll be back in 2012. Because he's Jello Biafra.

You didn't think he just hung up his Doc Martins after breaking from the DK, did you? No, he's only 52, you know. His latest group is called "Jello Biafra and the Guantanamo School of Medicine" and they released an album in 2009, The Audacity of Hype. If you listen to it (songs such as "The Terror of Tinytown," "I Won't Give Up," and "Strength Through Shopping") you will find out that he's just as Jello Biafra as he always was, only he's Jello Biafraer.

And along the way to that, there's his nine spoken word albums - I Blow Minds for a Living is a title that says it all, and the most recent one was 2006's In the Grip of Official Treason. Oh, and don't forget Lard, there's four albums he did there. Oh, and his dozens of collaborations, popping up like a manic machete-wielding jack-in-the-box on albums by Ministry, The Offspring, Sepultura, and Napalm Death. Oh, wait, also don't forget the many, many film appearances in indie documentaries - nothing major that's cracked a Cineplex near you (a couple recent examples are Punk's Not Dead and Nerdcore Rising), but still, the guy keeps his boots on and car keys in hand, you know? Because he's Jello Biafra.

Jello Biafra once shared a stage with the notorious hacktivist group The Cult of the Dead Cow. Jello Biafra answered an ad in the California classified ad mag The Recycler and that's how he joined Dead Kennedys. Jello Biafra went head-to-head with the PMRC (alongside such notables as Frank Zappa) over a suit for "distributing harmful material to minors" with his album Frankenchrist - over not the content, but the artwork! Jello Biafra gave the following promises when running for Mayor of San Francisco: "I will ban automobiles, legalize squatting in unoccupied buildings, auction off all high city government positions, clean up market street by requiring downtown businessmen to wear clown suits and tear down Pier 39." Jello Biafra has been photographed with a T-shirt which reads "Nobody knows I'm a lesbian." Jello Biafra released the cassette of In God We Trust, Inc. with the message: "Home taping is killing big entertainment industry profits; we left side two blank so you can help." - in 1981, decades before digital music piracy was even a story. Jello Biafra said "Don't hate the media, be the media."

So, anyway, in case you were wondering, as you search across the capitalist republic wasteland that is the grease spot where the American dream was squashed and you wonder if there's anybody out there with a spine left anymore, be aware that one Jedi of political rage is still out there swinging his saber at the Lovecraftian horrors that feed on hearts of men. Because he's Jello Biafra.