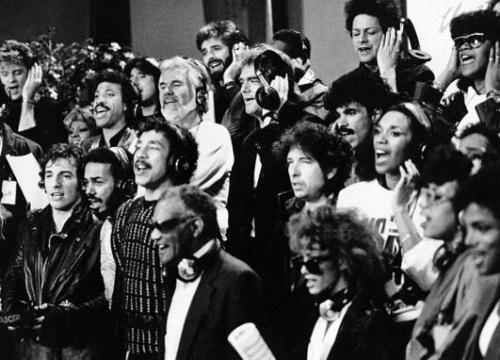 Why are we so fascinated with one-hit wonders? It's because of their curiosity value. To dream of being a rock star, with all the fame and fortune that entails, and then shoot to the top of the charts only to immediately fade back into obscurity again, must be an incredibly frustrating experience. But sometimes it happens because the artist simply didn't care for fame that much, preferring to stick to their niche after their brush with mainstream popularity. Or the whole act was just a one-shot. Or other mitigating circumstances broke the spell. Here are some of the most striking one-hit wonder stories.

This is an example of one-shot fame, but it was very intentional. It was a charity single, one of the biggest such collaborative events in music history. The song was written by Michael Jackson and Lionel Richie (we just saw him on the Today show on August 16th, 2012, looking pretty good for 63). "We Are the World" united the efforts of Stevie Wonder, Paul Simon, Tina Turner, Bruce Springsteen, Cyndi Lauper, Bob Dylan, Ray Charles, and dozens more A-list celebrities of studio and stage. The grand total of donated efforts to relieve African poverty eventually came to $63 million - still not nearly as much as that made by some top-selling acts.

Reason: Huge in the UK, only one-hit wonder in US

For one thing, this title is easily confused with the more famous Tin-Pan-Alley song of the same title that every first-year piano student knows. But it's a completely different song.

For another thing, the group has the most obscure name ever. "T'Pau" was a character from the original Star Trek series, chiefly in the episode "Amok Time" - the one where Kirk and Spock have to fight each other with those giant Q-Tips. T'Pau, played by Celia Lovsky, was the high priestess at this ceremony, and her character was largely a one-hit wonder in itself until later sequel series and expanded universe works brought her up again. As for the band, they had a fantastic career in the UK, still releasing charting singles in 1999. Their first album, Bridge of Spies sold 4x Platinum in the UK. They also had international success all over Europe. Just here to remind you, never judge a group by how popular they were in the US.

Poor Taco! He's really what most people think about when they say "one-hit wonder". His only hit was a cover, after all, and that was his main shtick was doing modern techno-pop covers of old Broadway-era hits. He also released similar versions of "Singin' in the Rain" and "Winchester Cathedral", but none of his other releases really hit. Beyond that for the curiosity value, he was born with the name "Taco Ockerse" in 1955 in Jakarta, Indonesia, to Dutch parents. Here's his moment, with the uncensored video with the blackface and neon cane and all...

...so it's no wonder he didn't get farther with such a niche act. Nevertheless, he had a smattering of a career with acting for both stage and screen and has even released a new album as of 2011, Timeless Love, so he's still kicking. We love him all the more for being weird. "I Wish" was one of those songs that got popular right at the crest of MTV, got the artist a VJ spot on MTV, then died as MTV itself committed reality-TV suicide. Skee-Lo, born Anthony Roundtree in Riverside, California, was a determined swimmer-against-the-tide. At a time when rap was all about being a druggie and a gang-banger, Skee-Lo released squeaky-clean songs with cuss-word-free lyrics. Seriously, a G-rated rapper in California in the '90s? In this cynical world, it never had a chance, but we dream along with Skee-Lo because he deserves to be more well-known.

With a name like "Partners in Kryme", you know right up front they're a hip-hop duo. But they were actually just James Alpern and Richard Usher, two people who basically never did anything else that anyone knows about.

And their song was only made for the 1990 film Teenage Mutant Ninja Turtles, based on the hyper-commercialized toy-commercial children's franchise of the same name. Seriously, would TMNT exist if it weren't for Reagan-era-leftover yuppie Capitalism? Why does The Star Wars Holiday Special get kicked around so much when We Wish You a Turtle Christmas never gets so much as razzed? Quick, name any distinguishing characteristic of any of the four principle characters at all. Why are we even caring?