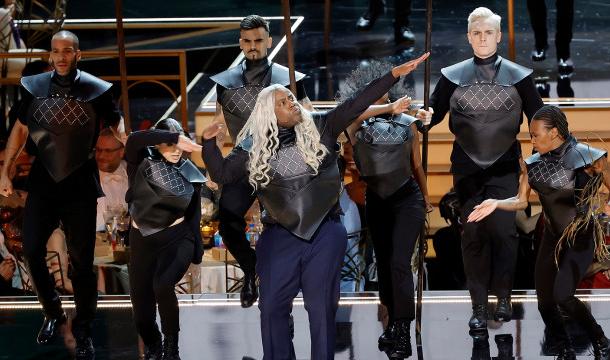 Greetings, all you beautiful cosmic blueberries all aboard Spaceship Earth! Here at the Utility Muffin Research Kitchen, we tend to avoid sounding just like every other entertainment blog. If the music world is howling about something, we tend to bide our time and think it over until we have something to say, rather than join the blab storm just for the traffic.

Do you really need to be that up-to-the-minute on what dress Jasmin Savoy Brown was prancing around in last night at the Emmys? CNN's got you covered. This rock 'n' roll blogger, humble hack writer in the tradition of Lester Bangs (though never to fill those shoes), I could care less if everybody in the music world slobbed around in shower thongs, sweatpants, and Tshirts like apathetic high schoolers at Monday morning cafeteria two weeks before finals. In fact, they could wear those barrel outfits that comic strips always show in the great depression.

But you know what? We're a day late blogging Emmys 2022, September 12th. So now we can season your annual media deluge with a dash of our spicy takes. I'll try to make up for Ricky Gervals not being available to cut up this time, like he did at the 2021 GGs:

It’s The Emmys tonight. And I’m not there to ruin it for everyone ???? Enjoy. pic.twitter.com/P87Uau4D9u

(presumably no relation to Calvin. That's the US 30th president, you education-starved waifs)

Actress and comedian Jennifer Coolidge rambled a bit too long at her award acceptance, activating the curious musical custom of "play-off music." Going for a good laugh, she simply started dancing to it instead of moseying offstage. Everybody loved that. We here at Lyric Interpretations consciously object to the disrespect of musical tradition, but we're not gonna killjoy the moment.

Jennifer Coolidge deciding to dance when the #Emmys attempted to play her off is a truly perfect moment pic.twitter.com/bBkOykRMZA

Kenan Thompson gave all of you a musical medley!

What is not to like? Apparently some fans bristled at the presentation of Kenan Thompson's "remixes of the theme songs of “Friends,” “The Brady Bunch,” “Law & Order: Special Victims Unit,” “Stranger Things” and “Game of Thrones.”" He did this in lieu of the standard opening monologue.

Apparently, this incident was catastrophic enough to trigger Esquire bloggers, as one says Kenan's music and dance number would "haunt her nightmares." She seems to particularly object to the "yassified" [ she repeatedly uses this word, apparently that was her word-of-the-day calendar ] updating of the Brady Bunch theme, and pretty much whines all the way to the Game of Thrones closer. "I can't unsee it!" she drama-gasps.

Check this stunning show-stopper on YouTube. Look, the audience had fun, the dance numbers are fun, even the surviving cast of the Bradys showed up for a bow. Lighten up, Esquire! Your audience is reading you over morning brandy and bonbons by the pool, you're poopin' on the party.

And she's far from the lone ranger.

I would live-tweet the Emmys this year, but the opener has been so mind-numbingly dull that I’ve decided to check into a retirement home instead. https://t.co/DmD97MZfOS

Bad dancing and no jokes. The opener to the #Emmys is supremely disappointing.

Holy Debbie Downer, Emmy audience, pull the stick out of the tailpipe already! We hardly ever see the iconic music themes of television paid such a loving and cherished homage. Kenan Thompson worked his heart out to do some imaginative rearrangements here, just wanted to give everyone a refreshing change with no scandals for a change. But at least a few people get it:

Idk I thought the opener for the #Emmys was cute?

Not sure what the point was of the Emmy’s opener. Doesn’t mean I didn’t enjoy it.

That Emmys opener was….bizarre. But I enjoyed the shit out of it.

Hot damn, we just might be on to something here! After all, we've blogged about TV theme tunes from a musical appreciation point of view. For those of you looking for the highbrow deeper meaning of Kenan Thompson's dance and music medley, you're thinking too hard. The point of his thesis is "fun," an emotion which typically provokes a reaction in normal humans which we refer to as "smiling." You know how to smile, don't you? Just stick a fishhook in each mouth corner and give a yank straight up!

No surprises, aged Gen-Xer / Boomer culture sensation Stranger Things won for best music supervision. Recall earlier we paid homage to Kate Bush's song, used in that show. And honestly, you're welcome to Stranger Things, I get it, it's a cool concept. It's just a little too pre-digested and shrink-wrapped for my tastes. Forgive me, I write for a fiction podcast that's paranormal / noir detective fiction, and our first season had dimensional portals popping up all over town in closets which led to rifts in the space-time continuum hosted by half-human half-moth monsters, a tribe of "mirror dimension" people, and a spider-god ruling a distant spider-planet who turned out to be the only one able to rectify peace between worlds again. Stranger Things needs to pick up the pace if it wants to keep me. I write for 366WeirdMovies.com; therefore I need Lovecraftian eyeball-and-tentacle monsters storming down the street in scene one or I'm lost.

Chilean-born, Montreal-based composer Cristobal Tapia de Veer won honors for her theme to HBO's "The White Lotus." The opening credits theme is a rich, exotic tapestry of world beat rhythms and nature sounds, as evocative as a shot of Ayahuasca in your morning coffee.

Theodore Shapiro won for his music composition in the series "Severance." The mind-meltingly weird intro sets the pace for this spooky, post-cyberpunk sci-fi drama which defies description, so Shapiro's music is appropriate as a meandering piano piece. It's on Apple+, so God only knows what's going on in there (for all ten remaining subscribers).

Bring back the sci-fi themes!

Here's your reminder that last year's Emmy awards recognized the theme songs to two series with broader appeal, "The Mandalorian" and "WandaVision." Way back when (some of you didn't have your first phone yet) I blogged about iconic classic TV sci-fi show theme tunes from Lost in Space to Firefly. Musically speaking, there's some favorite tunes associated with speculative fiction. So modern Star Wars and Marvel productions are at least keeping that tradition.

And look, the next time Kenan puts on a top hat and introduces himself as the Mayor of Television, you people better show some gratitude!