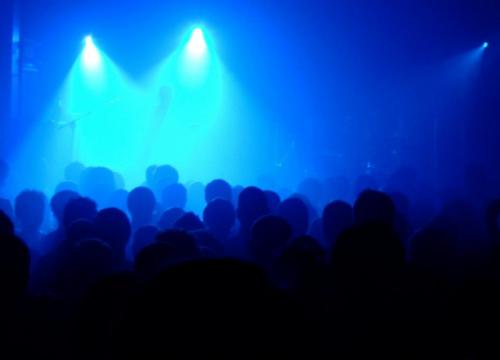 What can a performer do when their song remains popular for decades? Imagine having to do tours with some forty to fifty shows per year, year after year, and the crowd is calling out for their favorite song, and you yourself have played it (and heard it) so many times that you're literally physically sick of it. Or even if it's not that bad, you're still so bored with it, you just want to move on.

For many famous artists, such as Led Zeppelin with "Stairway to Heaven" or Radiohead's "Creep," the solution was to just refuse to perform it any more. But some artists reach a compromise: they'll play the instruments and keep time, while you - the audience - sing it to them! This lets the audience hear the song and be part of the moment with the band, and rests the singer's achin' tonsils for a set. Win-win, and thus was born the "audience participation" concept.

"Hey Jude" Beatles - One of the canonical examples, Paul McCartney has been milking audience participation for all it's worth for years now. Usually he'll sing the verses, but once we get to the "Nah nah nah nah, hey Jude!" part, the audience has the floor.

"Knockin' On Heaven's Door" (Bob Dylan) Guns 'n' Roses - One example of the typical call-and-response format. Guns 'n' Roses' cover of this rock standard grew more popular at live shows, with Axl Rose goading the audience on to a louder chorus every time. Not the most original act in show-biz, but oh well, everybody has fun.

"Piano Man" Billy Joel - Joel got so tired of this song that he omitted it from performances for awhile. Now that he's on tour indefinitely, it's his closing act. Joel merely plays the piano and sings the opening words for a cue; the audience then proceeds to sing the entire song to him. Joel may join in on the last chorus if the fancy strikes him.

"We Will Rock You" Queen - Here's a case of subtle psychological manipulation. The clapping rhythm was actually put in with the intention of getting the audience to clap along. Of course, if you've ever been to a Queen concert (or even a Queen cover-band performance, or even a high school football game), you know that that's exactly what the audience does.

"My Ding-A-Ling" Chuck Berry - To this day, the version that you'll hear on oldies' radio is the live version with the audience singing the chorus. That just happens to have been recorded live during the Lanchester Arts Festival at the Locarno ballroom in Coventry, England, on February 3rd, 1972. This was also Berry's only #1 US hit.