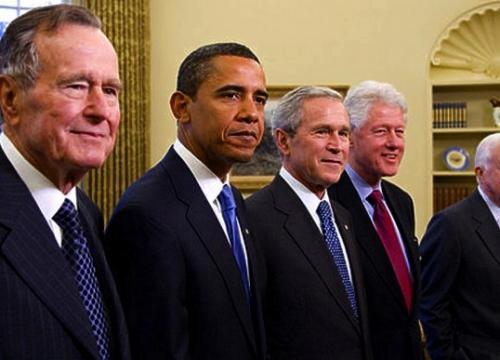 There's nothing like a good protest song to simultaneously exercise your free speech rights (assuming you're lucky enough to have them) and put down the big bad guy trying to suppress them. Folk singer Woody Guthrie said it best when he put a sticker on his guitar that read "This machine kills fascists." In light of recent events with the overthrow of Hosni Mubarak in Egypt (did you know that he had survived six assassination attempts while in office?), here's a list of songs which aren't at all shy about calling out evil overlords.

The most famous example. You might be surprised to find out that the title comes from a cartoon of the same name, that the cartoon was made by Walt Disney during WWII, and that the cartoon features Donald Duck in Nazi uniform working the assembly line at a German munitions factory! This is perhaps one of the most extreme forms of wartime propaganda, which both Disney and Warner Brothers engaged in, but it's also one of the most entertaining. For a much grimmer Disney vision, see the cartoon Education for Death. The song "Der Fuehrer's Face" by itself is also part of Dr. Demento canon.

A song that deserves to be remembered today more than ever, because, as opposed to Hitler who targeted Jews, Pol Pot targeted intellectuals. Yes, by the way, we call this "the Information Age," don't we? When lots of us are becoming better educated because of the Internet, and more of us are knowledge workers than ever before? Yeah, if you're even reading this, you just might have been dead by now if you were a Cambodian citizen in the years 1975 to 1979 - over 2 million citizens, roughly one-fifth of the population, got wiped out during this time. But Jello Biafra was directing this song at two targets, and the other one was Western armchair-anarchists and mom's-basement Libertarians, whose anti-intellectual stance (and equal desire to smash Western civilization and start over a la the ending to Fight Club) shows an ignorance of what happened when these methods were tried before. Hence, "What you need, my son, is a holiday in Cambodia."

When the President Talks to God - Bright Eyes
Thumbs its nose at: George W. Bush

A rather sharp satire directed at the Religious Right and their hero, George W. Bush. You'll find a lot of protests against Bush in American music - he was in office for eight years with some very ticked-off liberals caroling his every move.

Young was another outspoken liberal calling for Bush's removal from power. Young defended the song's style, saying basically that an angry protest song should be irritating. By the way, in case you doubt that Bush belongs on this list with these other guys, he did have to cancel a trip to Switzerland in 2011 when he found out that they were waiting to arrest him for alleged torture activities at the US' Guantanamo Bay facility... so somebody seems to think so.

The Taliban Song - Toby Keith
Thumbs its nose at: Osama bin Laden, al-Qaeda, the Taliban, whoever...

While, in the heat of the 2000s' Iraq war, it was difficult to keep the cast of characters straight, they were all sort-of connected (as far as our intelligence could guess anyway), so this song applies. It's actually a very funny country song about Afghanistan families just trying to make ends meet and get by when all of this inter-country rivalry lands on their heads.

This song is perhaps the most popular and successful on this list, with dozens of covers over the years. Fogerty was specifically referring to David Eisenhower, the grandson of President Dwight David Eisenhower who married Julie Nixon, the daughter of President Richard Nixon in 1968. Now, guess who didn't have to get drafted into fighting the Vietnam War? The song doesn't name anybody specific in the lyrics, but a Rolling Stone interview revealed all.