The Turtles and a Duck : A Love Story 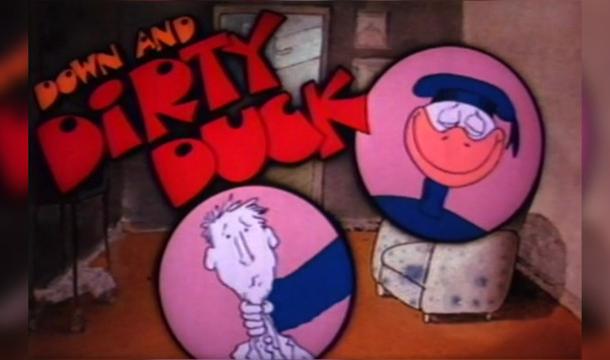 Hi, I'm Penguin Pete, and you look like you could use a good duck right now. Yes, you read that correctly, the quacking delights of a duck is just what you need to relax all that tension. I'm talking, of course, of a particularly down and dirty duck at that, courtesy of the same creative minds behind a music family spanning between The Turtles and Frank Zappa and the Mothers, and thus planting roots via Flo & Eddie in everything from John Lennon and Yoko Ono to T. Rex, Alice Cooper, Ramones, and even Duran Duran.

But first, we have to tell you about a duck. 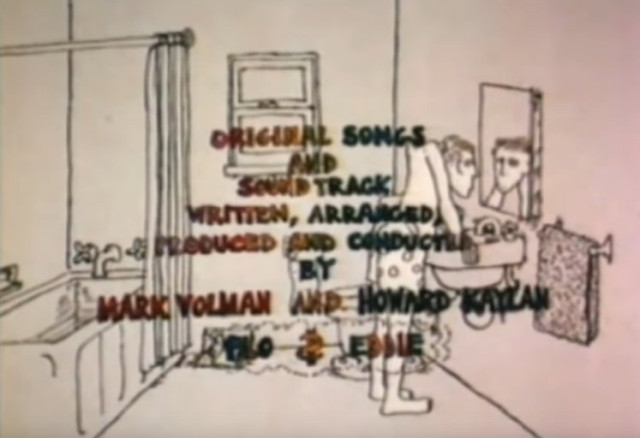 Down & Dirty Duck is a tough movie to track down, but one of the most rewarding rabbit holes you'll ever dive into. For one thing, it was released with alternate titles, "Dirty Duck" and "Cheap," the latter a dig at producer Roger Corman (a notorious penny-pincher). "Dirty Duck" made the poster, accompanied by the certified fresh tagline: "Madder than Daffy, dumber than Donald, more existential than Howard!" Meanwhile the opening bits make a reference to the title "Cheap." It just gets more confusing from there. 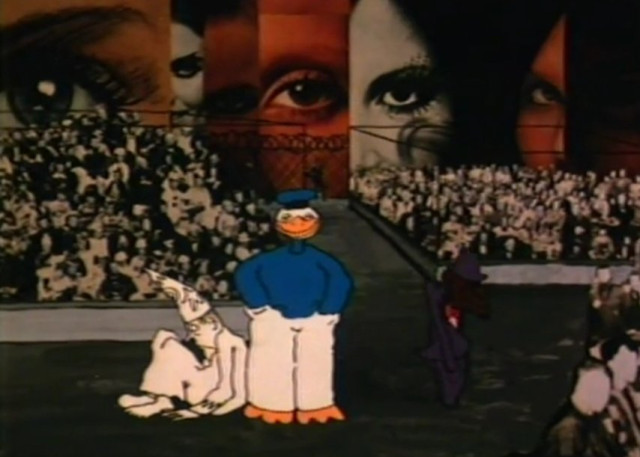 Probably a large portion of what is written on the web about this movie already links to my old review of Down & Dirty Duck at 366 Weird Movies. And even *I* wouldn't know about this movie had I not caught it on a late-night showing of that immortal beacon of early 90s cable TV, Night Flight. God knows it just barely got released when it came out.

Timed at the height of the counter-culture early 70s (Nixon was to resign in August of that year, with the news at this point screaming "Watergate" 24/7), this is an animated musical feature with crude adult humor in a similar style of the previously-released Fritz the Cat and works of Ralph Bakshi. But that is overselling this flick, a quick, scribbled-together skit loosely connecting funny monologues to funny songs with psychedelic scenery whizzing by as transition. While the flick is fun and the music of course rocks, the animation isn't that overwhelming and the humor / attitude ages it badly. But as with many things associated with Flo & Eddie, you just had to be there. 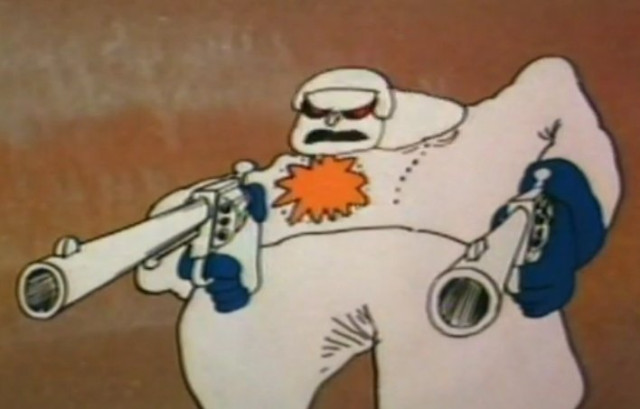 The whole film is in the style of Flo & Eddie's stage shows, which we will get to in a bit. Down & Dirty Duck is a work of broad political and social satire, made for the very narrow audience of Zappa+Turtles fans. Nevertheless, if you squint hard, you'll see topical relevance to political shenanigans of today, as well as the movie Ralph Bakshi wished he'd made.

The whole movie is at Shout Factory TV for ad-supported viewing, or you can skip it and view the Cinema Snob's review. 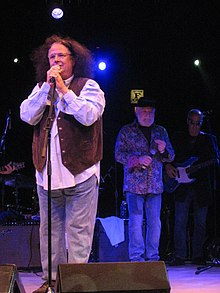 In the first place, those two names are pretty much everything you need to know about The Turtles, along with keyboardist Al Nichol. The Turtles are perhaps best known for their 1967 #1 hit "Happy Together," but they had a string of chart-toppers throughout the '60s. Founding members Volman and Kaylan were put off by their record label's mismanagement and dissolved the Turtles by 1970. 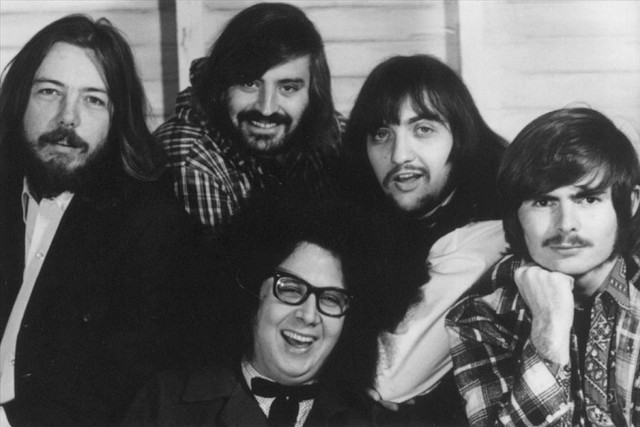 That's how Volman and Kaylan ended up in Frank Zappa's band - and listen, it's a pretty far stretch from "Happy Together" to your average Frank Zappa and the Mothers of Invention song. Moreover, Volman and Kaylan took up the stage persona of "Flo & Eddie," a little 2-man band within Zappa's stable.

Recall the pacing and general chaos of Down and Dirty Duck back there, and then give a spin to any of the series of live Zappa+Mothers albums called "You Can't Do That On Stage Anymore." Notice the frequent little skits recorded in between songs, such as "the groupie sketch"? Those are all Flo & Eddie bits. Flo & Eddie, as a unit within Zappa's act or on their own, made their shows partly around their humor and laid-back chatter, lazily leading into and out of jamming tunes. Their stage act was one of a kind, still is, in fact.

Besides their work with Zappa (including another indie flick by a band, 200 Motels), Volman and Kaylan were solid part-time studio musicians who lent their talents to a diverse spectrum of better-known acts. Let's name a few: 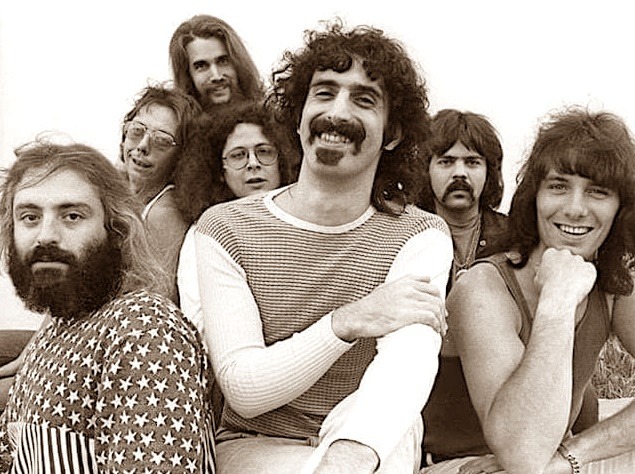 Lest you think it was all high-minded art with these two, they also signed a sweet little cash gig composing the soundtracks for the cartoons… wait for it… Strawberry Shortcake and the Care Bears. You pretty much couldn't loiter on a street corner in the '80s without some corporate syndicate cartoon snatching you up to help with production. 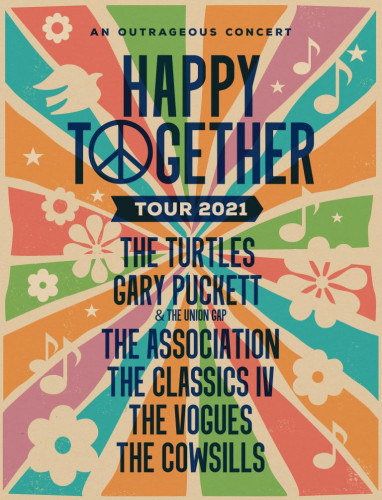 They bided their time until the corporate planets aligned, then circled back to the Turtles years to sue Sirius XM for royalty rights to the Turtles' songs which had been playing for years by then without their seeing a cent. They won, to the tune of several million - which adds up when you consider the commercials made with that song, like this one and that one and here's another one.

They also launched the "Happy Together: 25th Anniversary Tour" as a partially regrouped Turtles Featuring Flo & Eddie. However, Kaylan has developed health issues which keep him offstage in recent years, but Volman is still going strong.

Which leaves us with a case of a musical ghost duo, virtually unknown in their own right but outstanding for their careers buried within other bands. Sure, Flo & Eddie actually released a few albums under their own names, particularly the debut The Phlorescent Leech & Eddie. But that was one time when fame eluded them, wouldn't you know it. Keep tabs on them under their Turtles brand at the official Turtles website.

The only thing we have left to really mark Flo & Eddie as a definitive work produced mostly under their own steam is… that duck. After all, that was a really good duck!