I Sing the Body Electric - Songs About Computers 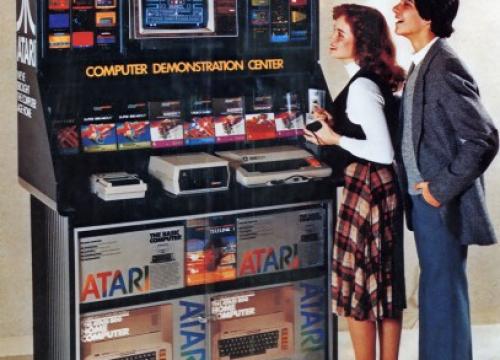 IBM just won the TV game show Jeopardy with its Linux-powered dynamo named 'Watson,' an event which record-winner Ken Jennings hailed with the meme "I for one welcome our new computer overlords!" With all the digital technology in our lives, it's about time we started seeing songs about computers. Thanks to the rapidly-advancing field of artificial intelligence, computers will soon be able to write songs about us.

This is one very literal example; Arcade Fire points to the historic 1996 chess match between IBM's Deep Blue and Garry Kasparov as the end of human innocence and the dawn of the cynical world of digital, but sterile, perfection. "We watched the end of the century, Compressed on a tiny screen."

From Neil Young's oh-so-controversial and notorious album Trans, this is one of his takes on technology's effect on music. It's felt here the only way Neil Young delivers anything, with both barrels. The vocoder-voiced computer strains its memory banks to sound human and nurturing, but instead is limited because it is, after all, a machine of plastic. Panned by almost everyone at the time, but Neil Young has since revealed that this whole album was his way of shutting down emotionally in reaction to the life struggles he was going through.

You don't get much scarier than lyrics like "Digital dreams, And you're the next correction. Man's a mistake so we'll fix it, yeah! Take a look at your own reflection." This was originally written for Geezer Butler's band, but it ended up on the Dehumanizer album, fittingly enough. Good thing, because Dio made it 100x scarier, as only he could. Bow to your master and accept your fate, human!

Back when there were such a thing as photocopy shops, you used to see these photocopied cartoons stuck to the wall that said "To err is human. To really foul things up requires a computer." And that's the kind of sentiment expressed here. Actually, it goes far deeper; if you look at the lyrics, the song seems to blame technology for dehumanizing us while providing us the illusion of reality to substitute for the reality. Oh, and the video shows scenes from Barbarella, the classic science fiction film from which Duran Duran gets its name.

Wow. From their album The New America. Bad Religion puts the record for hammy declarations of undying affection out of reach forever, and all over a pile of circuit boards! "I love my computer; you make me feel alright. Every waking hour, and every lonely night." It's creepy because... well, we act that way now, don't we?

Whoo-boy! Leave it to Kraftwerk, the German techno-dance wunderkind, to make a digital song about using digital machines and make it the coolest ditty you've ever danced to. Kraftwerk is more than a synthpop group - they've branched the divide to become bona-fide music hackers! Sing along with us now: "I'm the operator with my pocket calculator!"