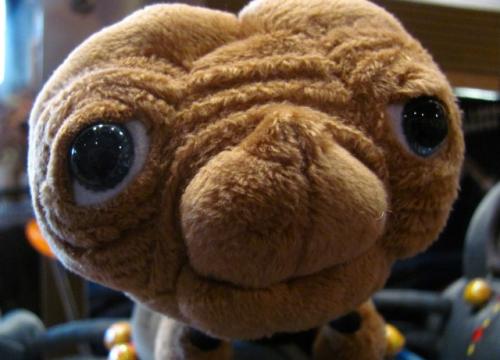 Oh, how the universal planetary model polarizes our thoughts! Imagine how we would have evolved if the universe were one big flat plane, where we could just keep walking forever. Yes, it would still take 17,000 lightyears to get to the next alien civilization, but at least it wouldn't be on out mind all the time. As it is, those unreachable worlds are forever hanging over our heads as bright twinkling jewels in the sky called "stars." They taunt us with how visible and yet how far away they are.

So we build rockets and telescopes and try our mightiest to pierce the veil of black space. And we culturally obsess about those twinkly things in the sky and who or what we would find out there - if we could make the trip without dying of old age. Our media is filled with space travel notions, from Star Trek and Star Wars to hundreds of songs devoted to the concept of being galactic citizens first and Earthlings second.

E.T. the Extra-Terrestrial, the 1982 film by Stephen Spielberg, forever put friendly-alien-visits-Earth films on the science fiction map, and it's the inspiration for the metaphor used in Katy Perry's E.T.. Katy Perry's single, platinum certified and chart-topping though it might be, uses a pretty heavy-handed approach that sounds like it was conceived by songwriters running out of ideas facing a deadline. But it does kind of connect with the "love song about the person from the other side of the tracks" sub-genre (see Billy Joe Royal's "Down in the Boondocks" for an early example), only interpreting it into a "wrong side of the nebula" idea instead.

Well, it doesn't work very well and it doesn't make a lot of sense - "fill me with your poison" just doesn't sound like a lovey-dovey line, you know? Perry herself, who's way more intellectual than your average pop star, here apologizes that "E.T." is a song about "falling in love with a foreigner," which puts an even more disturbing interpretation to the lyrics (what foreigner makes you a victim of abduction?) than the ones you'd be naturally inclined to make at face value.

But hot tamale, does it ever sell a lot of records! It's been a world-wide Top-40 hit and a #1 Billboard Hot 100 hit. This makes Teenage Dream, the album "E.T." is from, one of fewer than ten albums to produce four or more #1 hits since Billboard magazine started keeping records.

It also has Kanye West as the guest vocalist, just for an even more disturbing spin - Kanye has different DNA! Yeah, is it that big a deal?