Songs of Unity, Songs of Labor 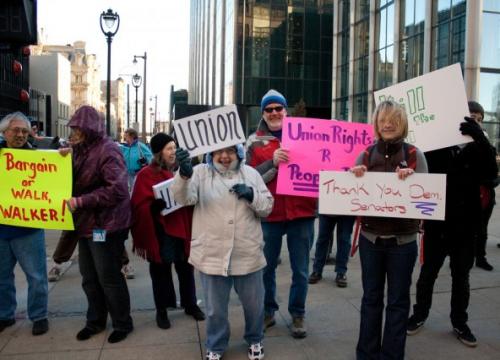 Regardless of which side of the political aisle that you fall on, it is difficult to deny the tremendous impact that the American labor movement has had on the nation. With protests cropping up across the nation due to budget cuts and the elimination of the legality of state employees’ protesting and organizing rights, I thought it would be a good time to take a look at some protest and labor songs of American lore.

Covered by a wide variety of musicians (including an incredible version by Bruce Springsteen (video link: //www.youtube.com/watch?v=aKjUBqvnKfA), John Henry tells the story of a man that was both born with a hammer in his hand and will die with a hammer in his hand. A relic of the rise of the industrial age and the expansion of the steam engine, John Henry extols the virtues of the tenacity, pride, and work ethic of the American laborer - and his triumph and superiority over the machines of the industrial revolution.

Like John Henry, it tells the tale of a man of singular dedication to his craft - only this time, instead of building a railroad, Casey Jones conducts the trains, ultimately sacrificing himself to save the lives of others.

The version by the ‘Dead, while not quite as grim and dark as that of the traditional version, hints at the troubles both ahead and behind of the man conducting the train.

Dump the Bosses Off Your Back

Originally written and performed by a Wobbly named John Brill in 1916, Dump the Bosses Off Your Back was a rallying call for many labor protestors in their struggle for fair working conditions. Following the tune of the old Baptist song “What a Friend We Have in Jesus,” “Dump the Bosses Off Your Back” was an angry, uproarious song that combined empathy for the workers, whose “life [was] made up of misery,” and a call for action: “All the agonies you suffer / You could end with one good whack.”

Originally written by Ralph Chaplin, “Solidarity Forever” is arguably the most well-known song of the IWW and has been sung by dozens of sympathetic artists, including Pete Seeger and Leonard Cohen (//www.youtube.com/watch?v=0jsQEwW4DVw).

While not focusing on any particular event or action, “Solidarity Forever” centers around the importance and power of people when they come together in unity and solidarity. Additionally, “Solidarity Forever” explains that “..without our brain and muscle, not a single wheel can turn,” explaining that the bosses and owners cannot produce or run anything if the workers themselves are not willing to work.

It would be difficult to find a more apt and more compelling labor protest song than “Bread and Roses.” As with all of the labor protest songs we looked at, it has been recorded by numerous artists, including John Denver (//www.youtube.com/watch?v=tqxiqYGIsWE).

Revolving around the concept of “bread and circuses,” which hits on the notion that if people are both fed and entertained then they will do as they are told. Coming originally from ancient Rome, the phrase is a powerful metaphor for the superficial appeasement of the people and workforce.

Deliberately playing on the metaphor of exploitation and appeasement, “Bread and Roses” begs for not only bread, but for equal rights for all and good working conditions. “As we go marching, marching / we bring the greater days / for the rising of the women / means the rising of the race.”

“Our lives shall not be sweetened

From birth until life closes

Hearts starve as well as bodies

Give us bread but give us roses.”