Haunted by Legends: Five Music Artists Rumored To Be Alive 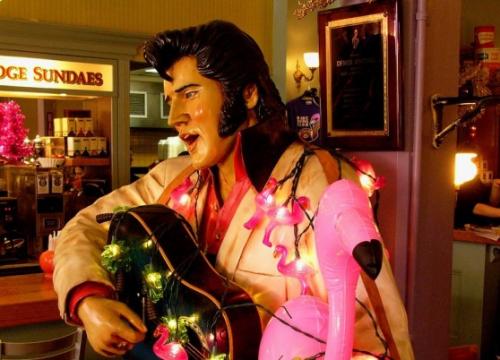 Andy Kaufman, the comic, actor, and surreal performance artist, was such a ribber that he left his fans dazed and confused, not sure what to think even decades later. Kaufman once publicly stated that if he were to fake his own death, it would be from cancer and he'd return 20 years later. He then was diagnosed with actual cancer and passed away in 1984. In 2004, fans, comedians, and even some family and his closest friends threw a "Welcome Home, Andy!" party... but he didn't show up. Maybe.

Musicians never go to such great lengths to mess with their fans' heads like that, and yet there are some who attained such a cult of personality that legends and rumors persist on for decades. Some people are just such colorful characters in life that a mere visit from ol' Clatterframe is just too mundane an exit.

probability of really being dead: 91%

One of two rappers who were the victims of unusual homicides, within a year of each other. Both were drive-by shootings with no apparent motive, and furthermore both of them are cold-as-ice unsolved murders, modern CSI-technology be damned. Oh, yeah, and they feuded with each other too. In B.I.G.'s case, his percentage is so low only because he'd have a good motive to fake his own exit - if he was responsible for Tupac's (or enough people thought he was). In any case, he was Notorious in a few ways, having had brushes with the law.

probability of really being dead: 89%

This is the other rapper gunned down in a random killing that remains unsolved. Doesn't it sound like there's a cover-up behind the scenes a la the Jack Nicholson flick Chinatown? The suspicion with Shakur is largely founded on the fact that there's more posthumous work of his being released than there ever was in his lifetime. But we go right back to doubting that it could be possible - yes, he had even more brushes with the law (including an actual prison sentence) but he already had so many enemies, how could he possibly be hiding all this time without one of them finding out and going to finish him off?

probability of really being dead: 71%

The Lizard King himself is our prime candidate for pulling a 'ha ha! only kidding!' He was definitely that kind of trickster, he had the poetic soul and sensitivity to be fed up with the rock business, and if he did pull a Lazarus and come back, he'd have some kind of sermon ready to teach us this heavy moral lesson. But outside of that, there's not much going for his continuing lifespan - born in 1943, he'd be just cresting senior-citizen status about now at age 68.

probability of really being dead: 97%

Now, Michael Jackson had motive all over the place. He was independently wealthy for life, if he could just reign himself in and not blow it all on chimpanzees. He was hated by the media for decades at the end, no matter how much his fans loved him. He ran around in glasses and surgical masks and hoodies for half of his career. Parents of kids hauled him into court a lot. If there was ever a man who wanted to disappear, it's Michael. Except that it's just too hard to see it happening - the media circus at his passing blew away every other news story for months afterwards, and how does one of the world's most recognizable faces (due to years of botched surgery) blend into the crowd? Of course, he could just get a whole bunch more surgery...

probability of really being dead: 100%

The King is also King of the undead-dead musicians trope. His supposedly continued life has been the subject of tabloid front pages, mockumentarys, countless songs, and easy jokes in commercials, TV, and film. And hey, even if he can't come back in person, a million impersonators have risen to take his place. The real Elvis would have a hard time proving it's really him - wouldn't that be ironic? In any case, don't get your hopes up - his demise was thoroughly documented by the media second only to Michael Jackson's and even if he were alive in 2011, he'd be pushing 76!