Get Your Wicked On With These Songs About Witchcraft 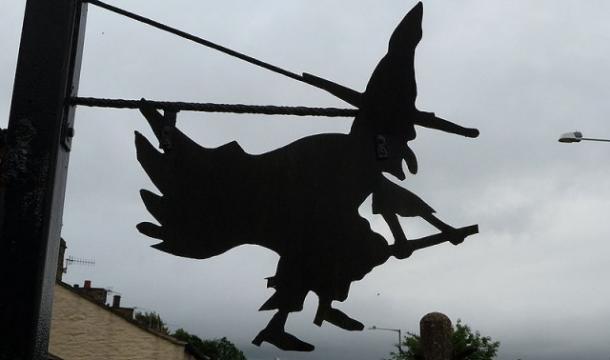 Well, this Halloween, we thought we'd pay attention to all the ladies out there who are going as witches. Why witches? Because there aren't nearly as many songs about zombies or werewolves (Osbourne and Zevon, but then what?). But also, witches in music have a mystique - they can take the point of view that witches are sexy, or that witches are evil, or both.

"Season of the Witch" - Donovan

Nobody does it like Donovan! One of the pioneering psychedelic songs, it captures the spooky atmosphere of witchery - the line "you're got to pick up every stitch" stems from a superstition that witches couldn't cross a boundary without performing some OCD ritual such as counting, so if you weave threads over your window at night it will stop witches from coming in because they have to stop and count the knots... or something like that.

Now, Santana is the band that was born to play this song. The song was actually originally by Fleetwood Mac off their English Rose album, but Santana's cover, mixed brilliantly with Gabor Szabo's "Gypsy Queen," is the one everybody remembers.

This is a cover of the song by Crow - A Minnesota blues rock band around Summer of Love time. Black Sabbath put it on their first self-titled album - back when they thought of themselves as more of a psychedelic band. And doesn't this sound like it should have been the B-side to "Fairies Wear Boots"?

Will we ever be done raving about what an underrated band Coven was? Jinx Dawson blows it away once again, from their first album Witchcraft Destroys Minds and Reaps Souls. Which has another song, "White Witch of Rose Hall," that's also worthy of your consideration. Take us away, Jinx!

We went from Black Sabbath to Coven, the band that was their spiritual predecessor, to the Dio Black Sabbath. What the hey, we picked the YouTube video that does a nice little mash-up with Lord of the Rings. Ronnie James Dio does the theme such justice that we almost have to call this, of all songs, the definitive witch anthem!

But if you're not going to be happy with the rest of this list, then you deserve nothing better than Dave Gardner's silly beatnik poetry here...

Yeah, we're just as dumbfounded as you. Apparently this should have been on the double bill with whatever was playing after Robert Mitchum's "Thunder Road" for the film of the same title, but things got caddywumpus back there. And that man is Brother Dave Gardner, an ex-Southern-Baptist-minister who became a stand-up comedian and singer before his career hit the rocks when he got busted - Sam Kinison would be proud - with weed. Hey, it was the early '60s, they had their buns pulled much tighter back then.

So there's the Halloween witch's playlist. And isn't it a lot easier to listen to music while riding a broomstick since they invented the MP3 player?