The Week in Music News and Interesting Stuff We Found 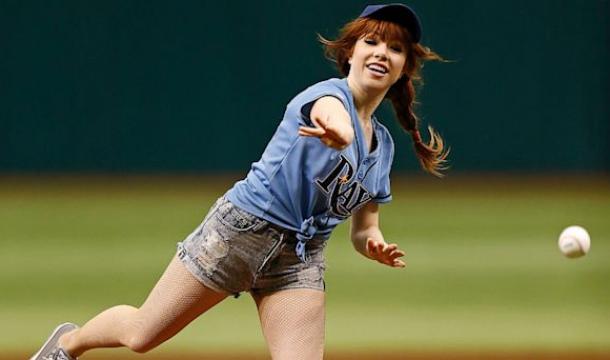 Definitely starting things off on the lighter, fluffier side of the news here, but Carly Rae Jepsen got to throw the first pitch at some ball game and pulled it off masterfully. With two gifs capturing the gifted athlete's form for prosperity. Really, it's the game's fault for not having home plate over there. Also, who knew people still played baseball?

"Tonight I'm Getting Over You", baseball!:

Thom Yorke finds a Spotify in his panties

Thom Yorke, lead metrosexual for the world's whiniest band, threw a widdle temper tantwum over his Spotify earnings and pulled all his music from the service. Awww, whosa sad Thom, huh, whosa sad, sad Thom? Let's all laugh at him in this song, where he uses music and interpretive dance to convey that he's a beautiful, tragic snowflake that nobody understands...

The London Wireless festival was darkened by an incident of violence when two audience members got stabbed. They're both expected to recover, and no arrests have been made, so this means that somebody's just stone cold going to concerts and stabbing people and nobody knows who he is! Wear your kevlar.

BTW, Jay-Z is reportedly losing the hyphen in his name. Aren't you glad we didn't waste a whole article to tell you that?

Here's a neat little write-up on the interview process for getting into Blue Man Group. For those of you who don't hang on this circuit, they're a theater performance group that's part music, part performance art, and part avant-garde post-modern culture-jammers. They're huge in Las Vegas. Here they are doing one of their signature routines involving improvised instruments...

Most bands have fans. Some bands have cults. But Insane Clown Posse has a tribe, called Juggalos, and this boy is destined to rise high in the ranks of the Faygo-washed.

By the way, Juggalettes, if you're looking for a hunk of grease-painted man, check out these whoop-whoop-ass pics of Juggalos looking for love.

Finally, your treat for the week

The Teen Queens were a 1950s sister act, primarily about doo-wop music. This song, however, is not doo-wop. It is often called such by people who do not understand that Go-Go / Stripper / Burlesque was its own genre. The Teen Queens scored exactly one Billboard Hot 100 hit, in 1956 with "Eddie My Love," and we'll toss it in here just to say we didn't gyp yah, because it is a doo-wop song:

And now, you know the difference.