Microchips and Music: More Songs About Or By Computers 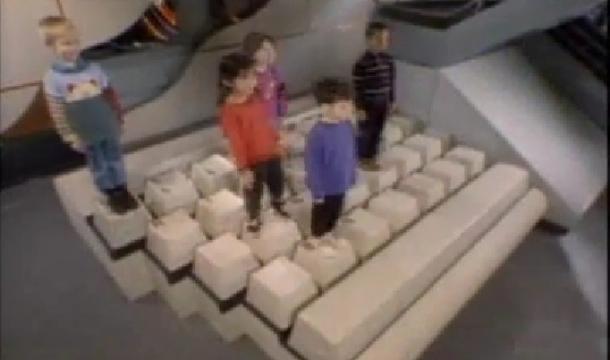 Following on from our vintage-era article, I Sing the Body Electric - Songs About Computers. Now that the PC era is dead, we'll take a nostalgic look back on the era of the desktop machine as reflected in music culture.

Wait a minute, what did that say? "PC era is dead?" No, it can't be! But it is. Let's face it, the home computer revolution of the 80s, 90s, and 00s only happened because people really wanted smartphones, tablets, and pads, but couldn't get them yet. Odds are far better than 50/50 you're viewing this post on a mobile device. The home computer (or laptop / notepad / notebook) market, once expanded to include your grandma on AOL, has now shrunk back to the people who used them for work. There's high-end gamers, but let's not kid ourselves that these people occupy an ecological niche with any kind of future.

Pause and consider just how long it's been since computers generated the level of excitement conveyed in this vintage Sesame Street bit:

No, the PC is ready for its toe-tag. Salon says it, more importantly (by a factor of megatons), MIT says it, so there's no room for argument. Now on to our fun, fun topic:

The German electronic synth band Kraftwerk is the first name that pops up when you ask "Who's written songs about computers?" Being both a ground-breaking innovator in producing electronic music and sincerely smitten with the microchip in their song lyrics, they are the canonical computer geek band. They wrote and released a whole album in 1981, Computer World, now a museum piece that's lauded and praised by people who laud and praise things. Here's the hit single from that work, "Computer Love":

Can you imagine that back in 1981, this was the music of the future? Nobody thought it would sound like dated 80s-New-Wave at all. We can't even dwell too long on Kraftwerk because they deserve their own blog post later, and we have much to cover here.

The second canonical band that's a favorite of computer geeks (the ones who make stuff). Instead of just listing their tons of science-song credentials, we'll just let you bask in the awesome of "Computer Assisted Design" and trust you all to Google the rest.

On his album Trans, Young's song "Computer Age" was just one of many that shook up his long-standing fans. The song uses a vocoder to produce a creepy precursor to the autotuned vocals so familiar today.

What most people don't know is that there's logic to this sudden shift in style. Neil Young at the time had sired a son, Zeke, born with cerebral palsy and autistic-like symptoms. The prognosis was devastating: Zeke would not talk, would not respond to communication at all. Neil Young had entered fatherhood expecting to raise a child in his music world; instead, he was forced to try to live in his son's more limited world. Parenthood has a way of doing that to you. As he revealed in interviews quoted in the book Neil Young: Long May You Run: The Illustrated History, "That's what the record's about. Read the lyrics, listen to all the mechanical voices, disregard everything but that computerized thing, and it's clear Trans is the beginning of my search for communication with a severely handicapped, nonoral person."

Wow. Right in the feels!

For a lighter, more whimsical flight of fancy from this album, we have to include "Computer Cowboy":

Yes, that's the first cyberpunk country song. How did we all survive that? It also makes a great gateway to the rest of this post, because we're leaving the realm of human involvement altogether now. Because the title of this post is "Songs About Or By Computers." Here we just have to leave mainstream music and embark upon a couple of trips in Ubuweb...

Peter S. Langston - "Some Velvet Morning" (By Lee Hazelwood) - Performed By Eedie & Eddie And The Reggaebots

How can you not love that pixelated cover album portrait?

Cook Records - Not Programmed For Love

Sorry, no YouTube copy exists. You'll just have to parse out this 1962 experiment in computer calypso at the Ubuweb page. But don't miss it, because it's hilarious in its own self-mocking cheesiness. The whole story is also fascinated, both of the making of this Cook Records album and a bit of early hacker folklore and culture - tying in with HAM radio operators even.

Hey, remember when the HAL9000 wheezed "Daisy" as Keir Dullea axed its faulty homicidal circuits in Stanley Kubrick's 2001: A Space Odyssey? That came out in 1968. Well, did you know it was already done for real (the song, not the sabotaged mission to space) in 1962? Here's the original computer "Daisy" recording, from an IBM 7090 series:

Yeah, here's the Ubuweb link on that one, although it's not much more illuminating than what you already know.

We'll call that a wrap here. We don't want to tax your scrolling finger.