How The Smothers Brothers Were Too Daring For 1969 TV 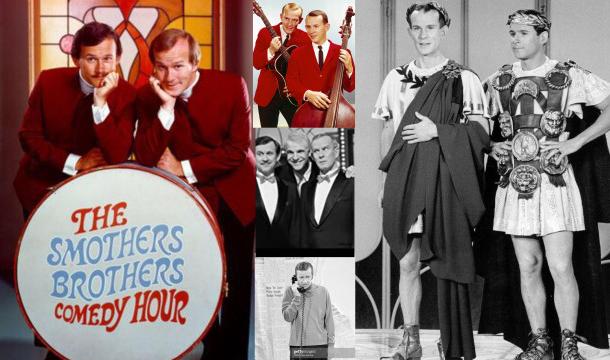 If any of you readers have a penchant for flag-waving, jingo-spouting, USA-style patriotism, you might want to skip this post. This is one of those posts that shows America at its butt-ugliest. Yet, even as I plunge down an Internet rabbit hole like a cat to drag a vermin carcass home to present proudly on your welcome mat, I do this with purpose. My purpose is to contrast now, the politically noisy time, with the year of your blogger's birth, 1969. It tells us a lot about how much certain things haven't changed a whit, while other things have changed very, very much.

First I gotta tell you about the show:

Merely the name "Smothers Brothers" sounds stale and Boomer-ish to modern audiences in 2022, but they were actually groundbreaking. Riding the wave of endless TV variety shows, The Smothers Brothers Comedy Hour was an attempt by the CBS network to gain a younger, hipper audience. In fact, for the late '60s, this was a common fable everywhere, playing out in a repeating pattern:

During the show's run, it hosted music talent which is now legendary even in our time: George Harrison, Buffalo Springfield, The Who, The Doors, Jefferson Airplane, Steppenwolf, Simon & Garfunkel, and Ray Charles, to name a few in passing. Even though Tom and Dick Smothers never broke a Billboard charting hit to speak of, they were well-respected at the time as more of a comedy duo. And if you want some idea of the comedy end, Steve Martin (six years before SNL!) was among their writing staff.

And the satire… got pretty intense.

In all matters mid-20th-century TV, I commend to your attention the late author Harlan Ellison… yes, of I Have No Mouth and I Must Scream fame, but stay with me. If you dig past Ellison's many outstanding fiction accomplishments, you will find a pretty solid, witty, and entertaining columnist, sort of like if Mark Maron had a blog and took up the stance of a Liberal Andy Rooney. The work in question is The Glass Teat, a compilation of essays on television criticism first published by Ellison as a regular columnist for the LA Freep.

I must quote this aside from page 111 of that work in a whole block, because every word is dripping with relevance in 2022. This point came up when Ellison was tapped to lecture at Texas A&M (there's that "Old-guard stuffy Big Business" again), and the recently-canceled Smothers Brothers show was a hot topic, which came up in discussion with one particular student.

> "And I asked for a show of hands (which I repeated in many classes) of how many had felt the Smothers Brothers had been in bad taste, had been seditious, had felt delighted when they’d been canceled. He was not alone in raising his hand."

> "In all conscience I must report that the majority of the students I asked had been saddened to see SmoBro go, but the tiny minority that raised hands were the vocal ones. They were not Nixon’s fabled Silent Majority, they were the Committed Few who knew there was a Heaven, there was a Hell, that God was a jealous people, and that the SmoBroShow was intended as a devious Communist plot to pollute the minds and precious bodily fluids of the Great American Viewing Public, which was not nearly mature enough to watch and make its own decisions."

> "I pointed out that if I - or any other viewer - did not dig the brand of pap being proffered by, say, The Good Guys or Green Acres or Mayberry RFD, we expressed our displeasure by turning that special knob. But we never mounted campaigns of outraged indignation to have those shows canceled. We were perfectly happy to let everyone watch or not watch as they chose. Yet he, and his ilk, not only wouldn’t watch the shows themselves, but they wanted no one to watch. I asked him what he was afraid we might find out. He had no answer."

You can transpose this exact same conversation to this minute, all over the media right now, discussing anything from Republicans banning books from schools to Republicans attacking Sesame Street to Republicans boycotting Saturday Night Live. Everything, it was all going on in exactly the same voice in 1969, before Watergate. For the same reasons too: Bigots could not stand media that was unbiased towards people of certain (pick all that apply) colors, beliefs, genders, classes, or sexualities.

This is why I scoff when all of you complain now "oh the Right Wing is so radicalized," "oh the country is so divided," and my number one berserk button, "the Internet was a mistake because it gave a voice and platform to all the morons." Guys, morons 50 years ago had a platform too, it was television… and before that radio… and before that newspapers… and before that jungle drums and smoke signals.

What Did The Smothers Brothers Do To Get Canceled?

Mainly, The Smothers Brothers Comedy Hour was the subject of draconian censorship and executive meddling from CBS, which objected to the following and either cut the segments or allowed them only under protest:

In short, the show was stifled by the smothering (sorry) censorship of the time, which concerned itself very little with conventions of moral decency and a whole whopping lot with expressing political opinions which countered the status quo. Hundreds of angry letters poured in from, as Ellison references, Nixon's "not so silent" majority. To put it in 2022 language, "a bunch of snowflakes got their tum-tums hurt by controversial humor and got a hashtag trending to get the show canceled." President LBJ himself wrote CBS to complain about the show - again, as that Chicago Tribune author points out, mirroring the later thin skin of president Trump.

Technically, the show was renewed for the 1969-1970 season, but then CBS' chief executive went rogue and axed the show anyway. It was replaced by Hee Haw, insult to injury. This axing led to a breach of contract, for which the Smothers Brothers sued CBS several years later and won to the tune of ¾ of a million dollars.

I'll repeat my recommend for The Glass Teat: This book is filled with ancient Illuminati secrets which you are Not Supposed To Know; the scales will fall from your eyes and you will be driven mad by the ancient feral wisdom of the wilderness prophets. Don't get into a media sciences argument without a bookmarked copy snuggled under your arm.

As for the Smothers Brothers, they're not remembered much for their music at all, but their shows were legendary and they returned to TV just a few years later.

Here is an entire unaired episode of The Smothers Brothers Comedy Hour.

Here is an hour-and-a-half documentary about the show's struggles with the network, named (sorry), Smothered.

Here is one of their signature pieces, "Yo-Yo Man."

The brothers Tom and Dick live on today in happy retirement, having been honored with awards and accolades which include the George Carlin Freedom of Expression Award, Honorary Doctorate Degrees from San Jose State University, several belated Emmys, and induction into the Television Academy Hall of Fame.

History: Learn it or repeat it!