Songs That May Actually Make You Stupid 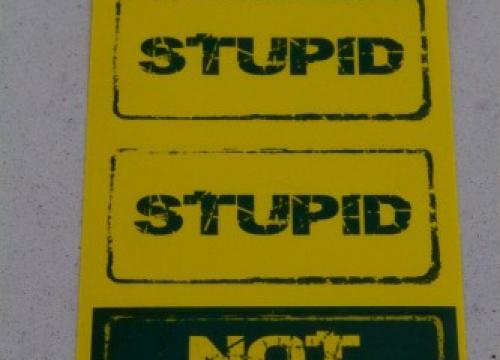 Every once in awhile, we come across a song that does more than speak to us - it utterly defines who we are, what we are feeling, and what we are aspiring to. These songs are rare, but when encountered, they have the power to resonate with us for the rest of our lives.

This article is not about those songs.

Rather, it is about those songs that come around just as rarely, but have an inexplicably even more profound impact on us: they actually manage to make us less intelligent. We’ve gathered five songs that we found to be so hideously intellectually offensive that they not only irritate, but seem to actively dissemble our intellectual prowess.

Let’s start with an easy one that everyone knows:

Released in the dim and dark prehistory of the late 90s, MMMBop, in addition to their brilliant golden hair, was Hanson’s dubious claim to fame. However, it isn’t the grating chorus that many of us regularly still have audial nightmares about, but a particular set of lines from the song:

“Plant a seed, plant a flower, plant a rose

You can plant any one of those

Keep planting to find out which one grows

It’s a secret no one knows

It’s a secret no one knows

Actually, it isn’t much of a secret. You see, there are these folks called botanists that know exactly which flowers, including roses, will grow. Heck, you don’t even need to be a botanist to know this. You could be a florist, a gardener, or even my mother. Ask any of them: given the right soil type, adequate water, and sufficient sunlight, flowers and roses will pretty much always grow.

Alright - so you can forgive MMMBop on poetic expression. But can you forgive

Let’s start with one of the very first lines of the song:

Alright, so that’s cool. We all did when we were kids. Considering how this is a song ostensibly about convincing a woman to have sex with Trey Songz via social networking, a reference to a children’s toy manufacturer, that isn’t as much stupid as it is kind of creepy. Let’s move on:

And if you got a body like a Coke bottle

Oh dear, where to begin? The fundamental misunderstanding of social networking applications? The hilariously out of date usage of the acronym lol in all capitals? Or maybe the inexplicable requirement of following Trey Songz on Twitter (but only if you “got a body like a Coke bottle,” presumably one of the glass ones and not a 2-liter)? Personally, it’s the demand that all of this take place on a purely public forum using Twit pics that just confuses the hell out of me.

For now, let’s skip the commentary and jump right into a lyric that cannot be forgiven by anything except the lack of an elementary-level education in astronomy:

“When I look at you

You love me for who I am”

Right where they belong.”

Wait, .. What? Just for reference, the closest star to Earth, Proxima Centauri, is 25,440,000,000,000 miles away. I sincerely hope that Ms. Cyrus’ painfully distressing misunderstanding is not shared by her fans.

2: Vanessa Williams: Save the Best for Last

Unfortunately, Miley Cyrus isn’t the only female pop vocalist that seemingly lacks even a basic understanding of astronomy. When I was conducting the extraordinarily painful research for this piece, I initially chalked it up to possibly a deteriorating education system and Miley’s age: 19.

Well, Vanessa Williams, in her Save the Best for Last song, brilliantly penned the couplet of:

“Sometimes the snow comes down in June

Sometimes the sun goes ‘round the moon.”

Alright, sure - sometimes it really does snow in June. It’s pretty rare, but it isn’t impossible, especially if you live in a temperate climate. However, and let me be perfectly clear about this, the sun never goes around the moon.

And both of those opinions are wrong.

At last, we have reached the pinnacle of our brain-murdering list of song lyrics. Alanis Morisette’s Ironic has earned itself the ire of English majors worldwide since its release in 1996, and for good reason: nothing that she writes about in the song is actually ironic.

Essentially, all of the lyrics to Ironic are incidences of bad timing, of terrible circumstances, and other unfortunate events. These are called coincidences, and these are not how irony is defined. However, it should be noted that the line “It’s a death row pardon two minutes too late” actually is a form of cosmic irony, which the Oxford English Dictionary defines as being “as if in mockery of the fitness or rightness of things.”)

Personally, I blame the song for the flagrant misuse of the word on an almost daily basis by people wishing to sound as though they were even vaguely literate.

Hopefully, you’ve managed to cling on desperately to the brain cells that you had before watching each of the above videos. The author sincerely apologizes for exposing you to each of them, but the standards of online blogging dictate that I provide for you a modicum of proof.

That, or he is a sadist. Take your pick.