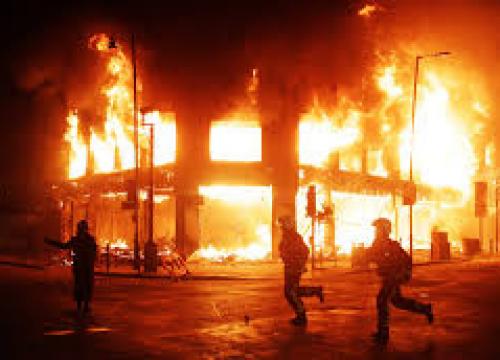 Are you "mad as hell and not going to take it anymore"? Got your random, ragtag band of Molotov-cocktail-lugging patriots ready to organize and smash the state? Occupying someplace that's a meaty part of the consumer-industrial complex? Need a little something to pump up the troops as they take to the streets? Herein, a list of anarchist anthems, ready made for your agrarian uprising. Viva La Resistance!

We'll start with the mellow, older ballads and work our way forward through the punk years to modern outrage.

Can't beat the old-school! People who never listened to Marley beyond the two or three mellow songs that make it to Top-40 radio assume he was just a laid-back toker who sang about smoking, funny hats, and dreadlocks. No, he was actually quite the socio-political rebel in his day.

"For What It's Worth" - Buffalo Springfield

The song may sound mystical and spooky, and is often mistakenly associated with Vietnam War protests and the like. But it was actually about the Sunset Strip riots in LA, when as many as 1000 demonstrators showed up to defy street curfews (10PM) in November of 1966. Riot police showed up and demonstrators clashed - amongst them Jack Nicholson and Peter Fonda. The song later got adopted as the protest anthem of the youth movements of the '60s.

"All She Wants To Do Is Dance" - Don Henley

A mellow break, a quiet before the storm. The song, as happily dance-worthy as it is, is actually about the shame of the youth being more interested in partying than in fighting political power. It's no coincidence that it came out in 1985 - Reagan had just been re-elected in a landslide with practically no resistance, despite the punk culture having screamed for years that we should watch what was being pulled on us. For the record (because history is dead), Reagan's vice-president was Bush Sr., Bush Sr. served his own term in office, and his son was George W. Bush; so there's a straight line between the Reagan years and the next generation's 9/11, Wall Street, and all the other things that seem to work everybody up today. Aaaaanyway, Henley decided to make a more radio-friendly message urging the young people to quit partying and look what was goin' down. It didn't work.

Another Top-40 sampling. This one's chock-full of secret-agent imagery and Mad Max sentiment. David Byrne mentioned that the song is about headline-grabbing late-'70s events and incidents revolving around political unrest, including the Red Army Faction, the Patty Hearst incident, and the high-crime rate and open drug usage at Tompkins Square, near where he lived at the time.

A funny one for a change. This one is more a parody of paranoid conspiracy-theory ideas about government intelligence. But Poe's Law applies here, too: it's impossible to come up with a scheme zanier than something the Central Intelligence Agency or one of its cohorts have actually thought of trying. Oh, and don't miss its use as the closing theme of Coen brothers' Burn After Reading.

Self explanatory, right? Utterly wasted in the film Heavy Metal, this song deserves to be made part of the soundtrack for something with flaming cars and looting.

From the album A New Kind of Army, with adorable cover art of four punk-rockers - mohawks akimbo - doing a flag-raising-on-Iwo-Jima parody with an upside down flag. What, political, this album? You're cheesin' me!

"So You Want To Be A Cop" - Leftover Crack

An important question to ask: what makes people want to be cops? We can see if you want to be a hero - and there are some heroes out there - but most of them end up being evil punks who abuse authority and brutalize the innocent, and usually are caught red-handed being corrupt and sometimes causing more crime than they prevent. (And if you don't agree with that sentiment, what are you doing reading this list?) Is it just the default professional choice for middle-school bullies or what?

We could have filled this entire post with Dead Kennedys songs and nobody would have complained. It's hard to pick just one, but this song best captures what's likely to resonate with today's breed of angry rebel.

"Jesus Was a Terrorist" - Jello Biafra with NoMeansNo

Oh, OK, technically this isn't a Dead Kennedys song since it's just Jello Biafra and friends. Still, think about how the lyrics here make a clever double-entrede - is the point that we should be like Jesus and rebel too? Or that Jesus was not at all what the Christians make him out to be, so we should rebel against them? Or that Jesus and the church together are the real problem? In any case, if Internet commentary (and recent elections) are anything to go by, anti-religious sentiment is forming a whole hogshead of anti-political sentiment in the states.

The magnum opus of anarchist songs. Should be playing over the end-credits to every film about a riot. Wouldn't have been out of place in Fight Club. Somewhat trite and pandering though it is, it's still got the sentiment down perfectly.

OK, now it's time to go back to work in your little cubicle with the florescent lighting and stale coffee and TPS reports, before you take your two-hour commute home breathing smog and listening to Top-40 bubblegum. You'll like that, won't you?