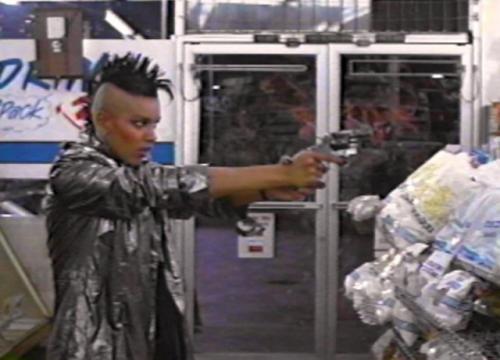 Last time, we listed some films that are perfect period pieces for music genres in their prime years. Now with the holidays around the corner, you might want to mark down some of these films for the genre fan on your list - if you find the one that's just their type, that is!

This guy-oriented romantic comedy just stumbled along in 1992 Seattle, accidentally becoming the perfect museum piece for ground zero at the birth of grunge. The soundtrack is loaded with Chris Cornell, Paul Westerberg, Pearl Jam, Smashing Pumpkins, Soundgarden, Mudhoney, and Screaming Trees (how's that for a name you haven't heard in awhile?). It's also the closest thing late Generation X / early Generation Y will have to an authentic snapshot of the time. Made by Gen-X tribal bard Cameron Crowe, and Pearl Jam members actually get a cameo, as if it needed any more street cred.

Since it was made in 1978 as an intentional period piece of the 1950s, it comes as no small surprise that it hit pretty close to the target. The songs are all original, however, so it's not so much an authentic representative of 1950s music itself, but an idealized portrayal of it. Still, it's amazing how much they got right - the outrageous hairstyles, the Happy Days gee-whiz innocence, hot rod culture, and that catchy emcee's spiel at the dance contest in rapid-fire rhyming slang. Oh, and a drag race on the ironically dry concrete bed of the L.A. River. Which ties into the next film...

Music historians often forget that the generation that grew up to embrace grunge started out punk. While we earlier praised SLC-Punk for being more about the punk scene, this cult classic period piece sweats punk from every pore. The humor is pure punk, the ethos and quasi-cyberpunk atmosphere is punk, the hilarious cultural and political parodies are punk. And the soundtrack is a masterpiece in its own right: Circle Jerks (who make a cameo), Iggy Pop, Black Flag, Fear, and Suicidal Tendencies all make outstanding picks. NOTE: Not to be confused with the ripoff/rape-in-broad-daylight hatchet job "Repo Men" which was Universal's attempt to shoot down Alex Cox's career as punishment for not kowtowing to their predatory contract - Cox himself made Repo Chick, a true sequel.

Renowned for being one of the stinkiest turkeys ever made, Xanadu nevertheless does one thing extremely well: Capture roller-disco (itself one of the dorkiest cultural fads ever) in a perfectly preserved chunk of amber. That's about the only thing it got right - We'll just save some time and link to The Nostalgia Chick's review of Xanadu, and say its spot-on. Also, the special effects could not possibly have accidentally ended up that cheesy - it had to be deliberate, with the producer roaring "If I can see one thing in this film that dates it a minute after midnight December 31 1980, you're all fired!" But the soundtrack works, with ELO, Olivia Newton-John, The Tubes!, and with Fred Astaire lending his famous legs, it all barely makes the film worth consideration for roller-disco nostalgia.

This Is Spinal Tap

By the end of the '80s, heavy metal was giving disco a run for its money as "cheesiest genre ever". But, like the parody band Tenacious D, its spirit is best captured in this utterly devastating tour-de-farce by Rob Reiner, which also created a fictional band which later became reality. But without dealing with the music, the film spares no target in merciless satire of every cliche of hair / heavy metal ever. Album cover art, hissy fits thrown backstage, debauchery and excess taking its toll, British rock stars with attitude, glam culture, umlauts, and of course the loudness war. It has a well-deserved reputation as a quotable cult classic film.