Can You Hear Me, Major Tom? 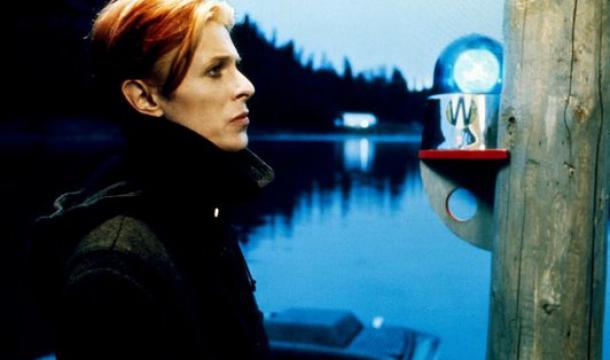 It's amazing to think that David Bowie is still kicking around in the entertainment scene after all these years. He just released an album "The Next Day," last year. From that album, the single "Where Are We Now?" shot to the top of the UK Singles charts at #6 in the same year - Bowie's first top-10 in over 2 decades.

This is the same David Bowie the Internet all knows and loves from this...

Yeah... at least it's presumably the same guy. We're not sure if he's some kind of immortal shapeshifter or what. He's certainly reinvented himself with each passing decade, seeming to belong more to another world than this one. He has recently released a statement that he is never, ever touring again or granting an interview again, and one could hardly blame him. He has appointed longtime producer / manager Tony Visconti his designated "voice on Earth" (yes, he put it just that way).

Lest you think from all this reclusive-ness together with the weird posing on that first video that he's gone Michael Jackson on us, here he is in "Valentine's Day" from that same album:

There, see? He hasn't come down with some freakish skin disease or gotten hideous plastic-surgery. He's just messing with us.

Messing with us is what David Bowie does best. Just think of the movie Labyrinth. In a movie crammed with singing Jim Henson critters, '80s CGI, fantasy realms, and a living 3-dimensional M.C. Escher painting, David Bowie still figured out how to be the one thing we can't take our eyes off all the way through the film... for one reason or a couple of others.

See, throughout his career, he's created a string of stage personalities:

Yes, that's a music video in 1969. What, you thought MTV invented those? Anyway, this song is "Space Oddity," not to be confused with the actual song "Major Tom," which wasn't even by Bowie, but by Peter Schilling in 1983. Several artists have in fact contributed to the saga of Major Tom to the point where he's almost a public domain character. There's even supposed to be a connection to Elton John's "Rocket Man." Bowie's original song appears to be about an astronaut who wanders off into space instead of coming back to Earth... or something. There's another theory that it's actually about Bowie's sense of alienation from the world.

But in any case, you can see a very clear influence here from Stanley Kubrick's 1969 film 2001: A Space Odyssey, which the song is even referencing in the name. A movie which, not to spoil it, does also involve a man wandering off in space... by one interpretation.

In the early '70s, Bowie was an androgynous rock star who apparently got some kind of superpowers from contact with aliens, if we get the story straight.

And you thought Elton John was flamboyant. The Aladdin Sane character was basically Ziggy (not to be confused with the cartoon character, although for all we know Bowie picked it out of the newspaper). That is, Ziggy with a lightning bolt painted over his face, the look that became his signature.

The film The Man Who Fell To Earth was not based on anything created by David Bowie, but on the novel by Walter Tevis. David Bowie just played the title character in the 1973 film. But you can see a definite arc from Kubrick to Bowie to Schilling. People went space-happy for a couple decades, what are you going to do?

This became his final branded stage persona. In the late 1970s, after his role in the film, he adopted the character for himself, exhibiting an almost Peter-Sellers-like tendency to want to put on fictional characters rather than be himself.

We're all the way back to 2013: The version of himself portrayed in "Love is Lost" from the "The Next Day" album is the Thin White Duke himself. That is, the puppet. The creepy, creepy puppet you'll be seeing in your nightmares...

David Bowie has changed over and over, and yet remains the same him. It's just that he made sure we got used to his eccentricities right up front, the way you'd wear a clown nose to a job interview when your resume pretty much guarantees you'll get hired anyway. It's so that we'd expect anything at all from him and accept it all. There's art pop, and then there's David Bowie.

He just exists on a different plane, man. His first personality wasn't the original him, either. That's just the point where his life happened to begin on the third rock from Sol, and he was other people in other lifetimes on other planets before and he's going to go on to something else after he's done here. That's clearly the narrative we're supposed to accept, and it's one we're happy to live with. The man's been entertaining us for four decades and hasn't broken character once.