Unknown Songs From Ubuweb That Will Bend Your Mind - part 4 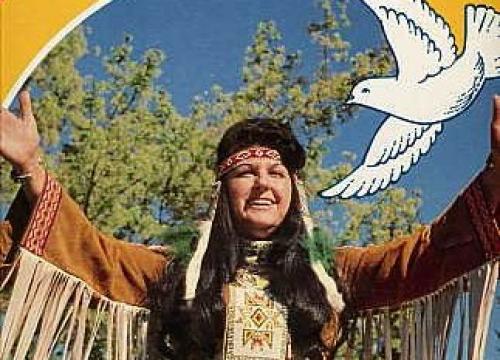 This is becoming an addiction, but... continued from part 1, part 2, and part 3, here's part 4 of our series on undiscovered gems of the Ubu.com "365 Days" project which deserve better discover by the web at large.

And at this point, we'll acknowledge that this series isn't for everyone. If you're part of the mainstream, you're wasting your time here. This series is for MUSIC GEEKS, people whose tastes are so satiated with the bounty of the Internet that they've gone far off the beaten path, exploring the sewers and catacombs at 2 AM, looking for something freaky bizarre because they're tired of everything else. Well, we found some diamond-encrusted skulls in this here catacomb, and all we ask is to sit back and relax while we trot them out.

"Then I Start To Yodel" - Princess Ramona

Perhaps, under a set of bizarre circumstances of unimaginable improbability, you have had occasion to say to yourself, "Damn, but I could really go for some gospel yodeling right now!" And if so, then, like everyone, you have despaired at the lack of quality gospel yodeling available to the casual browser. Well, this is where it's at. Because if you're going to listen to gospel yodeling, you might as well partake of the very finest gospel yodeling in the universe.

Suggested listening: Just dork out and do the robot in your underwear like you always do.

Hey, this is history, here! A commercial effort by the very conservative National Fuel Gas Distribution Corporation, from 1988, the year white people discovered rap and blacks started pretending they'd never heard of it. What will aliens think when they hear this broadcast out through space? Where are these kids now? Who wrote this? Did it actually sell people gas? What cigar-chomping corporate stodgy was desperately convinced that he'd be cool with the kids if only he produced a rap commercial? If we once sucked this hard, how did we get better?

Unleash your inner animal with this beastly delight! Walk on the wild side and bungle in the jungle! Let it make a monkey out of you! By Harry Winkler, who obviously had issues with people confusing him with The Fonz all his life.

Sadly, there was no YouTube animation. This would be right where we'd put it if we found one. Baby Jesus wept softly. A thousand Internets to the first New-Groundser who fits an animation to this underrated masterpiece.

Suggested listening: While changing your own Depends, because the nursing home staff locked you in the janitor's closet again.

So batty it's charming, this one-off piece is perfect for your folk revival festival. This is what happens when grandma gets a hobby and everybody's so glad to get her out of their hair that they don't bother telling her that the Salvation Army Bake-A-Thon isn't exactly a star-power venue.

"Take It From Here" - Xerox

Warm your little capitalist, coin-grubbing heart with yet another corporate musical piece. This was a 1963 recruiting commercial for Xerox, way back before everything. In fact, the Xerox Alto, widely recognized as the first commercial home computer (as opposed to game system) was yet to come out for ten full years. Heck, Ken Thompson and Dennis Ritchie wouldn't even invent the computer platform with their creation of Unix and the C programming language for another six years! In 1963, the mere fact of a photocopy, in grainy fly-specked black-and-white, was a miracle matched only by the Apollo landing - again, six years later. "He's cute! Are you married, Charlie?"

Suggested listening: While enjoying your Sunday-morning hangover with your head in the sink.

We've all heard stories about what a tragedy it is to be insane and artistic at the same time, a tortured genius who has to squeeze their art out through the bars of their crazy cage. But what do you do when your muse is insane? And drives you to tearfully invent an entirely new genre that never took hold? Specifically, that muse is the perfect blend of Prince and The Chipmunks? Dwell with us for a moment of dour contemplation at how many sleepless nights "Gleneil" spent, frantically trying to suppress this muse who insisted that it Must. Be. Heard.