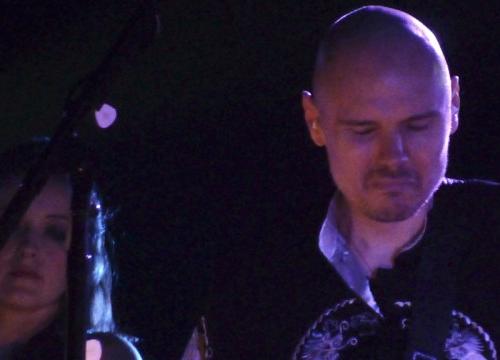 Sitting in a bar in East Lansing (that’s in Michigan, folks), my girlfriend asked me what bands would be playing that night.  After naming the ones I could remember offhand, I stopped at the name of one band - Sauron - before becoming completely derailed, ranting about how stupid of a band name Sauron was.  This lead to a discussion about what dictates whether or not a band name is stupid, and how in the world I could love the Smashing Pumpkins as much as I do with an inane name like that.

“I uh,” stammering, “guess that it’s the embodiment of a certain eternal juvenile posturing on behalf of an angsty, made-their-best-music-in-the-90s sort of band.”

I was dead wrong, as it happens.  As it further happens, I, and I imagine most people, are just as wrong concerning the origins of other band names.  With this in mind, I put on my INTERNET INVESTIGATOR hat and did some digging.  Let’s start with ...

The Smashing Pumpkins’ name is almost legendary for being archaic and weird, and the band gave multiple, whimsical answers regarding its origin.  In Vieuphoria, for example, Billy Corgan, The Pumpkins’ frontman, told the television host that he received the name “from God,” and that it was “God’s joke.”

In the March edition of the band’s newsletter, they explained the name with this story: “Gene Simmons came to us in a dream and said: ‘Joe Strummer [vocalist from the Clash] is a pumpkin, drunken and smashed.”

In addition to being a ridiculous response to an innocuous question, it was also a lighthearted lie: as it happens, the Smashing Pumpkins’ band name is instead the result of Corgan’s idle, boyhood fancy.  Jason from AllExperts.com claims that Corgan “heard a friend say during Halloween that he was going out and would be ‘smashing pumpkins.’ Billy just thought that it was a cool name for a band.”

In 1993, D’Arcy, the Smashing Pumpkin’s bassist, pretty much confirmed the above, calling the band’s name “a stupid name” and that “Billy named the band before there even was a band.  He was like, I’m gonna have a band and it’s gonna be called this.”  Incidentally, the “Smashing” part of their name is meant as an adjective - in the sense of a pumpkin being “smaaaashingly attractive,” or something.

After storming the music world world with sounds festooned with antiquated melodies and the lilting, haunting vocals of Colin Meloy, the Decemberists have gone on to release six full-length studio albums.

Since many of the greatest songs of the Decemberists revolve around telling a story - notably “The Mariner’s Revenge Song” (shown here with legos) and “My Mother Was a Chinese Trapeze Artist” - it should come as no surprise that there’s a story behind the name of the band.

The original Decemberists were anything but a folk-rock music outfit: rather, they were 3,000 Russian army soldiers that had revolted from the Imperial rule of Nicholas I.  Lead by their officers, the soldiers formed as a protest against the rule of Nicholas I, whom had assumed the Imperial Russian throne after the abdication of his elder brother, Constantine.  Apparently, they favored the Russian Constitution and proclaimed their loyalty vehemently to Constantine in the Senate Square.

After a full day of attempting to parley, including sending the beloved war hero Mikhail Miloradovich for him only to get shot by a rebel that had the equally Russian-sounding name of Pyotr Kakhovsky, Nicholas I ultimately broke the Decemberist rebellion with a cavalry charge.  For better or worse, the rebellion was essentially stillborn when the rebel’s elected dictator, the Prince Sergei Trubetskoy, entirely failed to show up for the revolt.
Thanks, Wikipedia!

The year was 1992.  The husband and wife foundation of Arcade Fire, Win Butler and Régine Chassagne had taken an inexplicable vacation to my home city of Flint, Michigan for the purposes of learning what it was like to be an American living in a poor city.  This is because they are from Canada, where poverty is unheard of and none of their cities have died.

Because Win Butler is a fanatic gamer, he dragged Régine to the local Aladdin’s Castle, an arcade franchise in the midwest.  I think just the midwest.  At any rate, a very young version of yours truly had just discovered the original Mortal Kombat, and had quickly gone from scrub to pro.
As Win and Régine watched in adoration as my fingers flew across the buttons, I began moving so fast that friction finally caught up and the buttons started to melt.  Despite the agony in my fingers and the smoke obscuring my vision, I pressed onward, determined to keep my title as king of the Flint Aladdin’s Castle of Mortal Kombat.

That match would ultimately end in a draw as the flames from my fingers engulfed the Mortal Kombat arcade, eventually setting the entire arcade on fire.

However, what is true is that in an interview with Rolling Stone, Win said of the band’s name that “It’s not a rumour, it’s based on a story that someone told me.  It’s not an actual event, but one that I took to be real.  I would say that it’s probably something that the kid made up, but at the time I believed him.”

So then: there’s a chance that the person that told Win the story at least saw me in that Aladdin’s Castle.  That is, if you believe that I actually ever got that good at Mortal Kombat.