Can Yoko Ono Get Just 15 Minutes Of Respect For Her Own Career, Please? 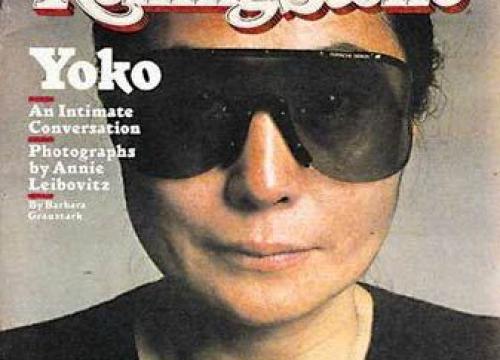 Hi. I'm here to talk about a taboo topic.

Yoko Ono is taboo in the music community because she has spent half of her adult life as the widow of one of the most famous rock stars in history. Pause and consider, for a moment, what it's like to live under that kind of shadow. The mythology that sprung up around her in the media drowns out practically everything she's had to say. There's the "broke up the Beatles" myth (not true - like any group, they were headed for splitting up due to artistic differences, like any supergroup composed of four tremendously talented people), and the "fights with Paul McCartney" myth (highly exaggerated), and the "animosity between her and Cynthia Lennon" myth (more Cynthia's doing than her own)(and by the way, how's your relationship with your significant other's past bags?).

But when you bring up Yoko Ono, herself, as an artist, that's when the feathers really fly. Especially since it's her least accessible pieces that go viral on the web, where she's just screaming into a microphone for two minutes. Lou Reed can do the same thing and everybody still respects him. If Yoko Ono and John Lennon had never met, she'd have much less criticism for her work. But the Lennon aspect brings hordes of pop music fans, who generally couldn't identify with Ono's sensibilities coming from the avant-garde / Fluxus sphere. Such is the curse of any spouse whose own work stands in strong contrast to their life partner's, let alone one who is widowed.

Resume: Studied under John Cage and Ornette Coleman. Was doing concerts at Carnegie Hall as early as 1965, three years before her and John got together. Her songs have been covered by Elvis Costello, The B-52s, and Sonic Youth. She was invited to perform alongside Patti Smith. In just the 2000s so far, she has had nothing less than 9 #1 charting singles on the Billboard Club Play Singles chart. She has played and performed alongside the A-list of music, full stop.

Yet when you go to look up her singles in the Billboard book, it says "Plastic Ono Band - See LENNON, John". Yoko Ono, no no no.

No, darn it, she has her own career, she has her own claim to fame, and at age 79 as of this writing, having released a new album as recently as 2009, it's about time her talent got some credit. And you kids are not leaving this table until you've finished your vegetables. Here, dear readers, paste your eardrums on some of her more recent work and see if you're not surprised:

"Talking To The Universe"

That's her most recent #1. With lyrics as edgy as anything Kate Perry or Lady Gaga ever uttered, with a sound as modern as anything your local teen pop station is playing right now. Yeah, play it for people and don't tell them who it is until they ask, then spring it on them.

This from her 2009 album Between My Head and the Sky, just to show you how stunningly original she is. Something that a lot of people forget is that avant-garde is supposed to be playful. These lyrics are as whimsical and imaginative as anything by They Might Be Giants. But they have roots in Taoist / Zen thought - the elephant only appears big to us by comparison, you see, because your perspective inevitably colors your understanding, and a humpback whale might just as well ask "Why are you so small?" The UK Daily Telegraph called this album "fantastically cool" and "fearlessly weird" for good reason.

Just loll back and absorb this delicately beautiful video, directed by Mike Mills and Arya Senboutaraj to perfectly fit the fragile beauty of this remix by the Pet Shop Boys. The opposing lines of tension in these lyrics, between beauty and the ephemeral nature of our existence, calls to mind the Japanese word "aware" (pronounced 'ah-WAH-ray'), meaning the beauty of ephemeral things. And this in 2003, her first #1 Club Play Singles charter.

What does it take for a lady old enough to be a grandma to get some recognition around here?