Between Rock and a Heart Place 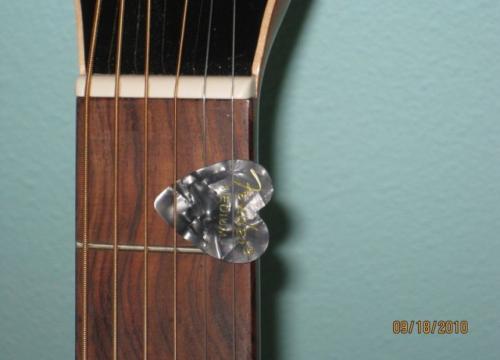 Music, though publicly distributed via the airwaves and websites, is inherently personal.  A particular song may mean one thing for you and then something altogether different for the person sitting next to you, in the other car, or around the world.  Tropes and stereotypes come into play when music is concerned, as well.  For instance, when discussing Adele with co-workers, I was chided by a female co-worker for admitting that Adele's songs could bring tears to my eyes.  Now, I'm no big, tough lumberjack or construction worker, but I am male, so (for her) it was a surprise that the songs from Adele's 21 would resonate with me to such a degree.  I think that speaks more to Adele's beauty, art, and voice than to any testosterone shortcomings on my part.  It also connected with me on a very personal level- each song from 21 contains lyrics that have personal meaning for me, though, truth be told, I often see myself as the villain in her songs.  But, the echoes of a relationship come through when she sings, for instance, in Someone Like You: "Nothing compares, no worries or cares . . . Regrets and mistakes, they're memories made . . . Who would have known how bittersweet this would taste?"  Her forthrightness with regards to the source material for 21, a particularly bitter breakup, is at once refreshing but, from the male perspective, a bit daunting.  Are we men no more than the mustache-twisting cads in these passion plays, or do we also have feelings?

I would say that heartbreak, remorse, and loss is universal- male or female, straight or gay, etc., it doesn't matter.  To my knowledge no one devoted an entire album like she did nor with so much evident heartache.  That said, Adele is a bit out of my usual listening genre- having grown up a hard rock/metal acolyte.  Which got me thinking- surely there are songs by rock artists that can evoke that same emotional response?  Something that could be said to come from the male perspective?  Well, the songs I could find on my iPod (my musical source material) probably won't have the impact of Ms. Adele Adkins; she stands apart and untouchable, in my opinion.  That caveat made, what can hard rock or heavy metal offer to soothe a troubled soul?  I will offer this- I'm instantly tossing out any sappy, trite songs that would come from the likes of Bon Jovi, Poison, or Warrant, not that they are even on my iPod, mind you.  I tend more toward the classic bands or unknowns, so you'll not find "Every Rose Has a Thorn" in this entry.  How is loss and heartbreak represented or interpreted in the male-dominated genres of hard rock and heavy metal?  Let's take a look . . .

Over and Over, Black Sabbath, The Mob Rules.  Ronnie James Dio, for all his mysticism and dark imagery, could also touch on the angst that will afflict hormonal young men.  When he sings, "Sometimes I feel like I'm dying at dawn, and sometimes I'm warm as fire" you can relate and feel it, too.  His wail of "It goes on over, and over, and over . . . again" rivals the depth of emotion and artistry delivered by Adele.  Match his voice/lyrics with Tony Iommi's guitar and it just works.

Down the Wire- A.S.a.P., Silver and Gold- the auditory version of Adele's turning up "out of the blue, uninvited," this song by the side project band of Iron Maiden guitarist Adrian Smith, details the cold-down-the-back feeling of hearing from an old love over the phone.  Defiantly he sings: "You can cry me a mountain, and you'll see what I do"- perhaps not the response the lover on the other end of the line was expecting?  In the end, our hero finds his conviction wavering and there is the hint of reconciliation.

Dead Meadow- Black Label Society, Blessed Hellride "Ghosts inside your head, we chose our paths when all is done and said."  A melancholy, slow dirge where the desolation of the emotional landscape is likened to a blighted wasteland.  Zakk Wylde, the singer/guitarists is often portrayed as the hard-drinking, neanderthal, bellicose frontman that metal guys can relate to, but he also has a soft inner core that makes its way past the leather exterior occasionally.

Faith, Bruce Dickinson, Skunkworks- This song finds Iron Maiden singer Bruce Dickinson (during his solo, out-of-Maiden days) at his pugnacious, combative, and bitter best.  "I wish it had a happy end, like fairy tales pretend there can be."  Bruce is normally not a super happy, effusive fellow (businesslike, but not gushing with joy for people) and this was a really dark, shoe-gazing period in his career.  Now, it is possible that the lyrics are about his troubled relationship with Iron Maiden founder and bassist Steve Harris and not a mystery love, but only he knows for sure.

Bringin' On The Heartbreak, Def Leppard, High N' Dry- Awfully close to hair metal, this song takes me back to high school and finding out that the heart is a battlefield.  Along with AC/DC's Shot Down In Flames, it served as a soundtrack for a less-than-stellar romantic period.

Separate Ways, Gary Moore, After Hours- Irish guitar maestro Gary Moore had a long, circuitous career in music.  Starting out in folk rock, he also dabbled in jazz fusion and hard rock before settling into the blues later in his life.  He was the master of bringing out emotions- with his lyrics, his voice, and, especially, his guitar.  The blues, as a genre, naturally lends itself to songs of loss, emotional pain, and the bittersweet feelings of longing for a lost flame.  Gary brilliantly captured all those aspects of relationship trauma, without being maudlin or disingenuous.  Also on this CD- Only Fool In Town (feisty, combative, and with smokin' hot guitar work) and The Hurt Inside.

No Reason To Cry, Gary Moore, Old, New Ballads Blues- I had to double up on Gary's blues period, which is brilliant.  He sings: "If you could see inside my heart, you'd see a loneliness, right from the start.  It seems like luck and love have passed me by."  This song has a country twang to it, but the real payoff is the solo.  Emotive playing was something Gary had in spades, but he reaches a new standard on this song.  His run of notes at the 5:34-6:05 mark produced tears the first time I heard it.

End of Conversation, Healing Sixes, Maple- Little-known band that I saw in a small club in the middle of nowhere.  What happens when you've both said all you can say and there's no middle ground?  The conversation ends, you part ways, and move on.  "Been in love, been in hell.  You know I won't show the scars too well."  Some of the deepest scars are those that can't be seen.

Wasting Love, Iron Maiden, Fear of the Dark- Not really noted for songs about love and relationships, they nevertheless wrote this tale about searching for love, for affection, and casual hook-ups in the search for that "desperate caress."  While it is true that men will go to enormous and self-destructive lengths to find passion, Bruce's lyrics point out all the shallow, pointlessness of that quest.

Diamonds and Rust (cover), Judas Priest- Originally done by Joan Baez, this song was an early-career cover song from the metal gods.  When they recorded this back in the 70s, Priest did it with roaring electric guitars and soaring vocals.  In the last decade or so, they've stripped it down to acoustic guitars and Rob's beautiful, restrained voice.  It's much better this way and honors the original version.  This time, it's the guy who gets to have his say at the end of a relationship, and nothing is ironic or duplicitous in the fact that Rob is gay.  It's a powerful song.

Tears in a Vial, Megadeth, The System Has Failed- Before he went off the deep end with religion, Dave Mustaine could write a good song.  This bitter ode to an ex is spat through snarled lips- trademark Dave.  "How I could walk away from something so rare . . . But you see it got too demanding, yeah . . . And I just didn't care, I just didn't care, if I cared, if I cared."  It's also a wake-up call and admonishes the listener to look in the mirror; self-evaluation is a rare thing with the male gender.

It's Late, Queen, News of the World- "You say you love me, and I hardly know your name.  And if I say 'I Love You' in the candlelight, I've no one but myself to blame."  Talk about angst and turmoil, this oft-overlooked track from Queen's brilliant News of the World album traces the conflict between heart and head, emotion and reason.  Damn, Freddie was brilliant.  Also from this album, All Dead, All Dead- guitarist Brian May's great song about a former love and the dreams that died.

Entre Nous, Rush, Permanent Waves- Brainy rockers Rush explore the tenuous links and connections between people and lovers.  "We are planets to each other, drifting in our orbits to a brief eclipse."  They offer up the hope, though, for something better- "The spaces in between leave room for you and I to grow."

Borderline, Thin Lizzy, Johnny The Fox- Rogue and poet, the late Phil Lynott knew how to write lyrics.  In "Borderline," Phil places his protagonist in a cheap dive, drinking to forget and ease the pain.  He interacts with the bartender, pleading- "Mister, fill me another, `til I go crazy and it turn my mind around."  Despite that request, the bottle can be the cause of many a troubled situation, not the answer to it.

Parisienne Walkways, Gary Moore, Out On The Streets- Gary, again, this time with his old friend, Phil Lynott.  In this song, Gary and Phil sing about loves lost and the memories made.  The City of Lights, Paris, serves as the backdrop for this melancholy song.  "Oh, I could write you paragraphs about those old, Parisienne days."  Cap it off with one of Gary's most memorable solos and you've got a classic.

Try Me, UFO, Lights Out- Another Phil, this time Mogg, sings about the perils and pitfalls of love.  "Try me, oh take me for a little while, before it's over and you leave me with just a smile . . . you say it's over, but for me it had just begun."  The role reversal, the male pleading for a lover not to leave, is especially poignant.  Mad and brilliant guitarist Michael Schenker contributes a slowly building solo that ends the song with a smoldering intensity.  Also on this album, Love To Love- probably the stronger song and deeper in terms of misery.  Mogg appears to be on the verge of tears when he sings "To be something, to be near you . . . I don't know where I'm going to . . . I've tried and I need you to stay."  Great band, under-appreciated.

Again, that was just a small sampling of what songs come from a non-pop genre that deal with relationship failure and heartbreak.  Far from indifference or stereotypical callousness, the male protagonists in most of these songs respond to breakup across a wide spectrum of emotions- from anger, to hurt, to sadness, to resignation, and even to hope.  If a man had written "Someone Like You," perhaps the tenor would change- it could be angrily predictable: "Go ahead and try to find someone like me," to surprisingly enlightened: "Don't find someone like me; find someone better."  I'm sure there are many, many more songs I've overlooked; it is an old iPod with limited storage space, after all.  Feel free to chime in with your hard rock favorites with a heart.