Getting Some Head With The Monkees 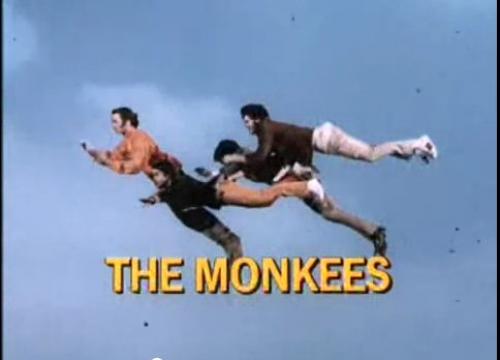 You will search high and low, far and wide, boson and nebula throughout the kingdom of music, but you will not find a music-movie with a story as bizarre as that of The Monkees 1968 Head. Magical Mystery Tour barely touches its depths. Controversy rages to this day about The Monkees, their music, their talent, their management, and most especially this movie.

Some (hate-filled critics) say that this spinach-flecked mess is a complete defiance of all sense, that it was a deliberate career killer in an already dead career of four people picked in the most cynical of business executive rip-off creations, people literally hired to fill a costume because Screen Gems/Columbia couldn't get rights to the Beatles themselves. Others (tearfully defensive fans) will declare that this avant-garde masterpiece is a stream-of-consciousness mise-en-scene of the post-media experience of being The Monkees, complete with their struggles to break out of their black box and blossom into the real people they were, but frustrated by being trapped in a cultural hall-of-mirrors and predatory studio contracts typed up by Don Kirshner.

I say you all have too much book-learnin'. And to prove it, I'm going to subject you to my own stream-of-consciousness thoughts in all their annoying candidness as I sit through the whole film for the first time. In so doing, I intend to ignore any preconcieved notions about The Monkees and just view it objectively as a film about a band that also happens to have had a TV series - no more, no less, not by a hair or a hare. As The Cowboy in David Lynch's Mulholland Drive said, let's just say that I'm drivin' this buggy, and if you fix your attitude, you can ride along with me.

Enough foreplay. YouTube, take me away! (spoiler warning from here on out!)

1:30 Ladies and gentlemen, this is the famous Los Angeles smog you all hear about. Yes, it really is that bad all the time, even in Long Beach. Take a native's word for it, everybody on this set had their nostrils filled with the stink of dead fish and refinery oil combined wafting in from Terminal Island and San Pedro. I left two decades ago and have not missed it for a minute. And why do they need all those rifles at a bridge ceremony?

2:50 Bones to the haters, I think the microphone bit was funny. Yeah, we all know what happens next.

4:40 Mistake #1: Save the psychedelic effects for at least an hour into the movie. That gives the acid time to kick in. Most film-goers would dose up in line (at this movie? what line?), and LSD takes about 45 minutes to reach your brain unless you're doing eyedrops. You're starting with the jello-salad color filters and we haven't even finished our watery soda yet. But the mermaid bit is inspired, even though it's bleeding obvious that they have knees. Later edit: I made the mistake here. Looking back, this was the perfect setup for people who came here expecting a dumb psychedelic stoner movie.

6:40 Fishtank! Just thought I'd point that out for later.

9:35 I am now pissed. Everybody set me up for a brainless dopey ride, and yet the film just did this fantastic original media piece that gives you the entire film in capsulized form in case you want to walk out now - all set to a Warner-Brothers-cartoon chant that would make Marshall McLuhan tremble in idealistic validation. This film is about 100-times more well-thought-out than anybody gives it credit for, even if it's still flawed. They even reference the fish cheer right after this. Fish cheer as in "Country Joe McDonald and the Fish", you beanbags, and you didn't even get it, did you?

11:30 Wait, I'm not done: Y'all did know that John Lennon starred in a film called How I Won the War, a black-comedy war-parody, released just the previous year, do you not? Because if you can't appreciate this fact, that's why you're wrinkling your nose in confusion all "I dun't geddit," and I'm clearly wasting my time with you already.

18:44 Even this infamous desert scene is a shout-out to a then-recent Coca-Cola commercial, as well as the then-recent Lawrence of Arabia. Is this what I've been set up for? I've plowed through 99 droopy reviews all panning the movie and insulting it and giving it raspberries, and I find out that it's actually brilliant? You are not worthy of this film, none of you! You all actually had me doubting Jack Nicholson and Frank Zappa, peace be upon him. Even the ad campaign at the time, all I ever hear about it is how dumb and misleading it is, nobody ever mentions that it was an Andy Warhol parody. Right over everybody's heads, is where this movie goes. Jack Nicholson, rest assured that Alejandro Jodorowsky feels your pain.

21:57 Random thought: What if Terry Gilliam, fresh off Brazil, did a stint writing It's Garry Shandling's Show? No, never mind.

22:41 First time the film's lost me: is that a backwards Italian flag, or am I just really ignorant about flags? There's a joke here somewhere I'm not ken to.

23:50 Anybody noticing how perfectly this song and the imagery go together? How wonderfully choreographed the dancers are? You did know that Toni Basil, renowned dance choreographer, was part of the staff for this film? You did know that there's more to Toni Basil than "Mickey"? "Can You Dig It?" just blew away half the rock opera films out there all by itself.

26:16 "Quick, suck it before the venom reaches my heart." What a great line to quote out of context.

29:14 I'm not even telling you why I'm laughing right now. You are all not worthy. My movie, mine, smack, hands off!

31:04 "Are you still paying tribute to Ringo Starr..." What must it be like to have that kind of verve? To actually be The Monkees and just throw that line in? To be able to laugh at yourselves that gleefully? And did you catch that violin gag just minutes before? This is the blackest comedy ever made. Eat your heart out, Coen Brothers! Even Teri Garr's in this - if you love it, go see Martin Scorsese's After Hours next.

40:35 Just grooving the music while we switch back and forth between Hoth and Endor.

43:00 Can't even count all the sight gags. Did I mention Jodorowsky earlier? Have I mentioned Monty Python yet? Or Zucker-Abrahams-Zucker?

44:51 I should just mention here, people who expected a different film after seeing the Monkees TV series? They really, really weren't paying attention.

47:01 Even switching scenes in mid-leap! Back up, catch that. He jumps up wearing white, lands wearing black. This was years before digital video editing made such effects cheap.

49:00 Please, no flash photography during this next scene. They don't make a camera that can handle the awesome.

51:22 Well, you have to work hard to follow up a scene that contains Frank Zappa, peace be upon him.

54:39 Potato beetle. It's a beetle, Beatles, get it? BTW, further in my continuing list of things I don't miss about California is these ugly little hellspawns, which are about as common as ants out that way. The size of the beast is only slightly exaggerated here. People in the Midwest think centipedes are scary. I say, even centipedes consider potato beetles too horrible to behold. It looks like an Elephant Man bug had an Eraserhead baby.

1:01:05 Continuity: In the midst of the festivities, one last scary prop is being hauled out. Now, while this is still awesome, it is getting to the point where the surprise element is wearing off. OK, I get it, The Monkees have a life where they get hustled from sound stage to sound stage never getting to be themselves and all the shows blur together until they can hardly tell their characters from their real selves and filmed fantasy from reality. At the same time, making a postmodern electronic-media statement something like "What if the little people inside your TV experience life exactly as you watch it from the outside?" or "Look what TV does to your attention span!" Marshall McLuhan is even over here going "I know, I KNOW, I wrote the book!" Even more remarkable, Harlan Ellison is standing on his stack of Glass Teat essays holding his own autographed copy of Strange Wine open to his essay-introduction Revealed at Last! What Killed the Dinosaurs! And You Don't Look So Terrific Yourself! and screaming "You see people! I told you so! Soylent Green is PEOPLE!" But lo, we're at the one-hour mark which means only twenty minutes to go, so perfect timing!

1:03:23 Right about here you're wondering "How did they have access to all those Gimp/Photoshop filters in 1968?"

1:07:53 Now with this Maharishi character. Alright, I'm starting to feel the pain here.

1:11:23 Before anybody makes some "droog" remarks about the white jumpsuits, Clockwork Orange came out three years later. It also predates the Cube surreal horror film franchise series, while we're all "how do we get out of this box?"

1:14:49 Whoa, picked up more awesome again! Not this scene in particular, but the overall film up to this point, behooves me to mention that the British TV series The Prisoner would have been an obvious influence, having just finished its run when Head was filming. Oh, one more thing, the 2006 film Stranger Than Fiction has a similar premise - a fictional character in a novel wants out and confronts the author.

1:20:38 Big Victor almost got scary back there for a minute. Being dolls for a sadistic giant's amusement would suck big time.

Ah, alright, it's over. If you're thinking the ending was just something they pulled out of their butt, you've forgotten the comment I made at 6:40.

But it isn't Miller time yet, I still have to do the final summation:

OK, I can see the flaws.

But its strengths - COME ON PEOPLE! Why is the entire world not trumpeting that this loony, one-of-a-kind, original monstrosity be recognized for the near-masterpiece it is? Everybody got their wigs spun by the Old Spice commercials ("I'm on a horse", etc.) a couple years back - well here's a whole film doing that. The Beatles themselves were very plugged in to the whole avant-garde art movement, ahem Yoko, ahem they financed Alejandro Jodorowsky, ahem Monty Python affiliations. In England, as we've mentioned here before, they had the Rutles, a more-deliberate parody of the Beatles. But if the Monkees' aesthetics upset you that much, they don't really matter here. Any four-person group could have been in the same shoes. Late-60s psychedelic culture and its pretentious hippie trappings were the target here, not the Monkees.

It is filled throughout with some of the best songs ever associated with the Monkees. Two minutes of any clip from this film trumps most YouTube viral videos now. TV series like Community, right now this very minute, are just nibbling at the edges of techniques this film took great nom-nom bites out of. If it were better-known, I would have supposed that half of our culture was inspired by Head.

People were knocking themselves out to be original, fresh, crazy inspired, to give all of you something you'd never seen before and will never see again. And this is how you thank them? And now you're all complaining because the box office is nothing but quadruple-remakes and retreaded comic-book superhero sequels?

Well, look at Head's box office. You see what happens when Hollywood tries to do something original?