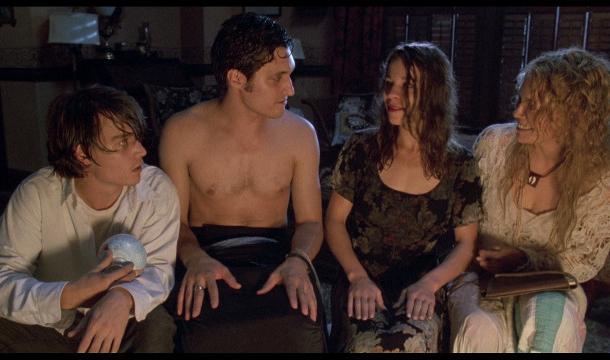 So… um… I don't know if any of you follow this story (ah ha har har). But actor Johnny Depp is in the news a lot lately in a televised media circus that's giving us all O.J. Simpson flashbacks.

As for my part, all I want to know is if Disney is going to insert an Amber Heard reference into the Pirates of the Caribbean ride. But anyway, Johnny Depp is on our minds so much lately (especially considering his public support), that we can't help but be reminded of his illustrious film career around every corner.

Most actors aren't noted for the soundtrack compositions accompanying their most famed work. But Johnny Depp was graced with an early association with composer, musician, and Oingo Boingo star Danny Elfman. This star-crossed fate, in conjunction with the directing choices of Tim Burton and the rest of their theater trope, weighed the odds in favor of some very cool music going on soundtracks from films that also featured Johnny Depp.

Hey, but Depp's treasure booty of film canon doesn't stop there! We're also going to ferret out hidden gems in Depp's film career - with songs you're less familiar with. That's how it plays on station Lyric Interpretations. Always watch for those curve balls.

Yes, that is Iggy Pop of the Stooges fame, in collaboration with Baltic/Slavic composer Goran Bregovi?. Iggy, powerhouse that he is (acted in 60+ films - not music, just acting), collaborates prolifically at about the same rate as Jello Biafra. In this work, tranquil instrumental harmonies kissed with Mediterranean breezes greets Iggy Pop's sideways sense of humor and gift for surreal lyrics, intoned with an underspoken murmur.

And you're maybe saying, "What? I never heard of THIS Johnny Depp movie!" Oh you're in for a treat. Not only is Johnny Depp very natural in his role in director Emir Kusturica's 1993 classic Arizona Dream, but he shares screen real estate with Lili Taylor, Faye Dunaway, Vincent Gallo, and Jerry Lewis. Take a breath now, easy going. Read that cast list again. Old Scratch himself couldn't arrive at a more bedeviling cast. This unknown movie deserves more eyeballs.

An incredibly obscure song, this is Technical Difficulties' only proper soundtrack entry we can find, but they do handle film score pieces as well. Now, we all know that the 2005 Charlie and the Chocolate Factory, starring Johnny Depp as the factory owner Willy Wonka, has some division among fans. But love the film or hate it, this soundtrack gem is there to scoop up as a bonus either way.

Technical Difficulties hit on a saucy, and ear-friendly, combination of funk and punk. Which totally may not be the first kind of sound when you think "let's remake Willy Wonka," but alas, perhaps this band will find its better home in further film work. Seriously, we were in the first couple dozen likes on that song on YouTube, it's so obscure.

Stay with me on this roller coaster built into an Internet rabbit hole: Kevin Smith (the director of #GenX - #Millennial crossover hit Clerks) directed a film based on a promise born upon Internet chat boards and his own Twitter circle. The crowd-sourced collaborative result, originally triggered by a prank post on Gumtree (the one Randy Feltface bought a bookshelf off), is the 2014 film Tusk, a work that… shall we say… hits people different. Yeah, very mixed reviews. It's about a man forcing his roommate to become a walrus, against his will. Neither of these two principle characters are Depp's role.

But anyway, the title song plays over pretty much the payoff scene to this film. Fleetwood Mac's song doesn't make any more sense in context. Given Kevin Smith's slippy-slidey dark humor and snide social-political snarkery, it makes that kinda sense, but not in normal logic. As for Fleetwood Mac themselves, they released "Tusk" as a single in 1979, a very muddled year for shifting music tastes. That really is the entire University of Southern California's Trojan Marching Band, which Fleetwood Mac brought in to back their tune, which also includes Mick Fleetwood slapping a big leg of lamb with a spatula. Look, it was 1979, you had to be there.

The Tornados were an early - very early! - UK surf rock group whose first hit, "Telstar" (named after the satellite, do keep up) was a #1 hit on both the UK and US singles' charts in the same week. This was, in fact, the very first #1 US single on the Billboard chart by a British group - (choke it down, Beatles!). The Tornados had a proper career as the in-house bad for producer Joe Meek, a pioneering artist in his own right. Even though you think of the spacey, Atomic-Age-meets-Hawaii sound of 1960s surf rock as being associated more with, say, Dick Dale and the Del-Tones, it was Meek whose geeky synthesizer experimentation blazed the trail for that sound.

By the way, this is the film set where Johnny Depp first met somebody that would figure large in his future. Take a big steaming guess who.

The film this time is 2011's The Rum Diary, which reprises Depp's role as legendary druggie gonzo reporter Hunter S. Thompson, debuted for the big screen in Fear and Loathing in Las Vegas. Since that flick was a decent turnout (but still not a box-office earner, even though a cult hit and critically praised), they said "hey, maybe we'll hit gold this time!" And dragged this second, more obscure work of Thompson's onto the scripting block. The result did not even fare as well as the earlier effort, perhaps missing Terry Gilliam's directing panache; though Bruce Robinson still proved a logical choice at least. The song goes along with this relaxed, tropical tale in any case.

While we're at it…

"One Toke Over the Line" -- Brewer & Shipley

Of course, the classic hippie ballad "One Toke Over the Line" by Brewer & Shipley is used in Depp's first turn as the infamous author in Fear and Loathing in Las Vegas (1998). This gentle, swinging song from the heart of Grateful Dead culture is a mandatory must-include, since Hunter S. Thompson even mentions the lyrics from the song in the book itself.

Naturally, your humble author feels a bunch of identification with the mad poet of rock and roll journalism, Hunter S. Thompson, given that he pioneered a new attitude towards recreational chemical usage as well as his surprisingly clear-headed grasp of politics and culture of his day. If you don't know, there's my biggest gig over at Dab Connection, the web's most trusted cannabis product and review source. There you may find pages of archives of me talking about, and reviewing, cannabis products and accessories, even squeaking out a few videos. Yes, that means that it is actually in my job description to test out drugs that companies send me and then give my snooty review about them. Hunter S. Thompson broke ground for me to do that, in the current great legalization of cannabis in North America.

And finally, the role you've all been waiting for…

OK, so the original sea shanty got swept overboard by the actual Pirates of the Caribbean soundtrack - which is kinda banal and under-inspired, not that anybody asked me. But the original song from the original Disneyland ride is still cameo'ed in because they didn't dare leave it out. The original song "Yo Ho (A Pirate's Life For Me)" was composed by the Disney in-house team of George Burns (no not that one) and Xavier Atencio, the latter also composing the lyrics to the Disney Haunted Mansion ride theme song "Grim Grinning Ghosts."

Well pilgrims, that about wraps 'er all up. At least I gave Johnny Depp fans something new to read and take their minds off the, sigh, media circus going on with his personal life.