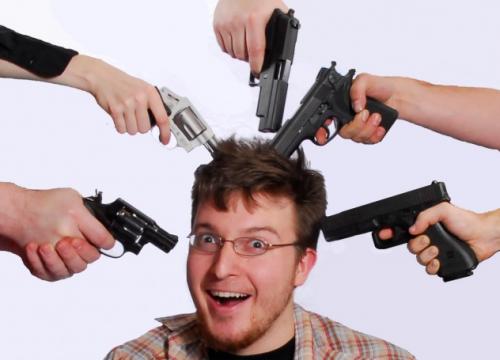 So you want to be a songwriter? Well, what will you write songs about? Love? Oh, yeah, like that hasn't been done. Lost love? Well, yeah, but we aren't exactly pioneering new territory there either. And while some artists turn to the blues or lighter subjects, some take a rarely-visited trip down the morbid path of devoting a song to mankind's gravest sin.

A legendary serial killer. This is one of the oldest examples, even though you think of it now as a standard pop ditty. It was originally penned by legendary German opera composers Kurt Weill and Bertolt Brecht for their stage production The Threepenny Opera. Its original meaning is probably lost on modern audiences what with the translations and covers, but there's a Marxist critique of capitalism hidden in there. By the way, the character is even based on an older opera, The Beggar's Opera, by John Gay in 1728, which makes ol' Mackie the grand-daddy of homicidal balladeers.

Another, more modern serial killer, who offs his schoolteacher, girlfriend, and judge to a toe-tapping tune. Probably the most cultish Beatles song ever done, because you either love it or hate it. Paul McCartney composed it, and defended the time he spent on it, while John Lennon openly loathed it and George Harrison kind of shrugged to it. But if you want truly, hair-raisingly awful moments in Beatles' history, look no farther than Steve Martin's rendition of this song in the blood-curdlingly bad film Sgt. Pepper's Lonely Hearts Club Band, which is either the funniest or the worst part of the film, depending on who you ask.

I Shot the Sheriff

A killer has to confess to one murder in order to free himself of suspicion that he also killed the Deputy. Originally by Bob Marley, later covered by Eric Clapton. And for Clapton, despite eighteen charting hits on the US Billboard Hot 100, this was his only #1 hit.

Used to Love Her

Guns 'n' Roses on the Lies album. This song has some humor to it, because it was written as a joke by Slash and Izzy Stradlin after Stradlin heard a broken-hearts song. "I knew I'd miss her, so I had to keep her. She's buried right in my back yard."

I Hold Your Hand in Mine

Master satirist Tom Lehrer released this in 1953 on his Songs by Tom Lehrer album, and darned if he didn't get away with being more shocking than half the bands since then! The lyrics build like a good Hitchcock story, line by line, revealing increasingly distressful details, until you're left with a picture in your head considerably gorier than the one you had when the song started.

Johnny Cash's classic hit is a good little morality tale about a prisoner living a life of regret as he serves his sentence for shooting a man in Reno "just to watch him die." So remember, kiddies, murder is bad, and if you do it, every day you'll hang your head and cry. Johnny Cash just about made a career out of murder songs, actually; there's "Don't Take Your Guns to Town," and "Delia's Gone," to name a couple.

Hey Joe, Where you goin' with that gun in your hand?

So in this list, we've had two narratives, four first-person confessions, and now, this rare example of a second-person telling, where the singer is confronting a man on the run after shooting his wife. The authorship of this song is widely debated, although we of course know that Jimi Hendrix made it famous. For a fun parody, don't miss Frank Zappa's delightfully zany "Flower Punk," a mockery of '60s flower power from We're Only in It for the Money. "Hey Punk, where you goin' with that button on your shirt? I'm goin' to the love-in to sit & play my bongos in the dirt."