Blast Off With Sun Ra's "Space Is The Place" 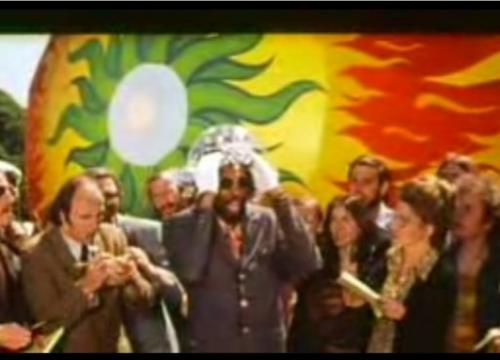 Time for another visit to UBUWEB (ubu.com) for a trip into a strange mind. Today's strange mind is Sun Ra, and we're here to see Space Is The Place, a feature film by Sun Ra. Sun Ra was a jazz musician, poet, philosopher, "afrofuturist", and Black Nationalist, who was active from the 1930s until the 1990s when he passed away. He was also both a brilliant musician and out of his gourd. Critic Scott Yanow called Sun Ra the most controversial of black musicians. Among Ra's many eccentricities was insisting that he bodily visited Saturn at the behest of aliens, that he was a member of an "angel race", that his birth name had nothing to do with him, and that he was related to Elijah Muhammed, founder of the Nation of Islam. As you can see in the film, he also had a serious crush on Egyptian mythology (the name "Ra" came from the Egyptian sun god).

But his quirks were widely tolerated in the music world. He rubbed elbows with contemporaries Fletcher Henderson, Duke Ellington, Fats Waller, Coleman Hawkins, and Stuff Smith. His own ensemble was called the "Arkestra" (ARK-estra, as in Noah's Ark, get it?), and grew to encompass a number of cutting edge jazz names of the '60s and '70s. If you're picking up a vibe of George Clinton (of Parliament / Funkadelic fame), you're on the right channel; Clinton once cited Sun Ra as an influence and said of him "Yeah, Sun Ra's out to lunch - same place I eat!" BTW, this film is checkered with nudity and offensive language (and gobs of outspoken race-related themes), so be warned. It's also hard to follow without a bit of explanation - that's what we'll provide here. The soundtrack by the same name is available, and then if you listen to it you'll now know what the blazes is going on, thanks to this article. See how it works?

Without further ado, let's blast off:

We start on the planet Saturn, which looks kind of like a scene from Alice in Wonderland. Except we have an Egyptian god instead of Alice. Sun Ra observes that "the music is different here" and resolves to set up a colony for black people there. Except his method of doing this is to use music to transport the black race. Working against him will be one Overseer (played by Ray Johnson), who is the devil to Sun Ra's god. First they have a battle of wills in a corny piano lounge in post-WWII Chicago, where Ra's performing as "Sunny Ray". The battle tears the lounge apart and all hell breaks loose. Suddenly the Overseer and Sun Ra are teleported to the desert where the Overseer challenges Sun Ra to a game, with the stakes being the salvation of the black community. The challenge takes the form of some kind of card game and this provides the frame for the rest of the story. The whole story and the individual character and plot threads take the form of a spiritual battle between Sun Ra and the Overseer, two supernatural beings who zap around Oakland, California, trying to one-up each other. Like any good morality play, they both have lots of tricks up their sleeve. Tied into all this are the two NASA guys, who just keep on getting more villainous with every scene as they rush to keep up with all the shenanigans and try to stop Sun Ra's plans, by every means necessary.

It's all corny, dated, weird, spacey - and truckloads of fun. The script is chock-full of stunning lines like "You can bet your tits on that." and "That's what I call cookin' with grease!" and "He's not dealing in Black Magic Soul Power." There's some very funny Zen-like conversations, some of them straight out of a Kurt Vonnegut novel. There's cosmic mystical speeches by Sun Ra trying to preach enlightenment to the masses. It's like one big jive passion play, and while it is never Oscar material, damned if it doesn't hold your attention. Have we mentioned the music yet? Let's not call Sun Ra "the black Frank Zappa", so do not think of that phrase again. No, stop that! Sun Ra plays with experimental forms, free jazz, bebop, "space jazz", and... the heck with explaining it, we have to call it "Sun Ra music" and leave it at that. Sun Ra was among the first jazz musicians to use two basses, electric bass, electronic keyboards, poly-rhythms, and group free-form improvisations, so innovation was his middle name.

There's also June Tyson (the soul sister in the big sunglasses who provides lead vocals on the music), chanting Sun Ra's hypnotic, repetitive lyrics in blues-shouter style. If you want to hypnotize people into joining your UFO cult, June Tyson is your ticket. Well, there it is, presented for your consideration. While it's a cultural relic of avant-garde film-making now, you'd better believe that it was influential on a big chunk of music history.