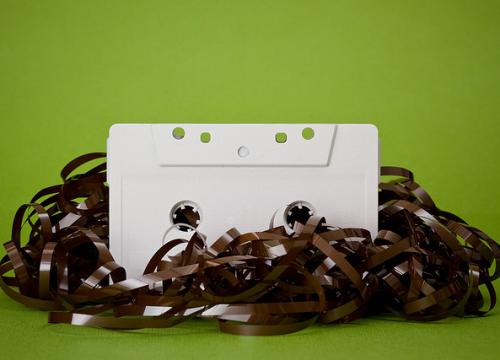 It happens with every medium. Video games for obsolete systems end up being consigned to "abandonware". Out-of-print works of books and magazines end up being circulated by Xerox "samizdat". In music, we have various cases where a particular work isn't available to be purchased in any way, shape, or form. The only alternative then is BitTorrent or other file-sharing site, second-hand vinyls on eBay, and the occasional scratchy tape cassette. And these aren't just obscure nobodies who'd be better off giving it away for free on MySpace, either.

Oh, and please don't ask us where to find these. Even if we know, we can't tell you.

The alternative version of "Friends in Low Places" - Garth Brooks - We're talking about the version with a third verse. Performed live, but never officially released since the third verse is somewhat cheeky.

The original "Pac-Man Fever" - Buckner & Garcia - This is a simple case of a novelty song that doesn't age well and has some licensing issues; Sony won't re-release it. There's a K-Tel rerecording out there.

The album Toy - David Bowie - The entire album, composed mostly of rerecordings of his previous work, was set to be released in 2001. However, Bowie inexplicably dumped the project and moved on to his next album Heathen. After awhile the album was leaked to the Internet, where nobody seems to care if it gets passed around.

The album Dylan - Bob Dylan - In the kind of slimy, lowball executive trick usually reserved for a Harlan Ellison cocktail party story, Columbia Records tried to use this to back-stab Dylan on his way out the door to Asylum Records. The whole album is actually outtakes and warm-ups from Dylan's recording sessions at Columbia; to get back at him for leaving, they released this without his knowledge or permission. They were hoping to sabotage record sales for his next album Planet Waves. It managed to chart anyway, although it's still out of print on CD in the US and Dylan frankly wishes everybody forgot it.

The album Squeeze - The Velvet Underground - This bastard stepchild of The Velvet Underground's discography was recorded just by Doug Yule after Lou Reed and Sterling Morrison had already packed up and moved out and Moe Tucker just didn't answer the phone. So, really, it's not a Velvet Underground album at all. It's Yule plus guest-drumming by Ian Paice of Deep Purple fame. Never issued on CD and likely never will.

The album The Ultimate Sin - Ozzy Osbourne - It did get full release in 1986 and even re-release treatment back in 1995, but it's mysteriously disappeared from the catalog since. Ignore the rumor about copyright disputes between Ozzy and song-writing bassist Phil Soussan - that was settled long ago and old hash anyway. It could be that Ozzy simply hasn't thought much of the album since then.

The album Into the Unknown - Bad Religion - This is a rare case where the band themselves just didn't like the work. The album sold poorly and guitarist Brett Gurewitz said it was a "misstep" and even joked that when they issued and then recalled the album, they sent out ten thousand copies and got eleven thousand back. It is available on the ultimate collector's edition vinyl set, though.

A whole bunch of early work by Modest Mouse - Modest Mouse released some early studio sessions and demos on cassette in 1993 - recorded with garage technology. In some cases only 100 copies were believed to have been made. These include albums Tube-Fruit, All Smiles and Chocolate and Uncle Bunny Faces, plus several EPs which were barely produced at all.

Just about everything by The Grateful Dead - Since after all G.D. simply never gave a fig about recording most of their work; they encourage fans to bring a tape recorder and bootleg it themselves.