Revenge of the Nerds... songs about science 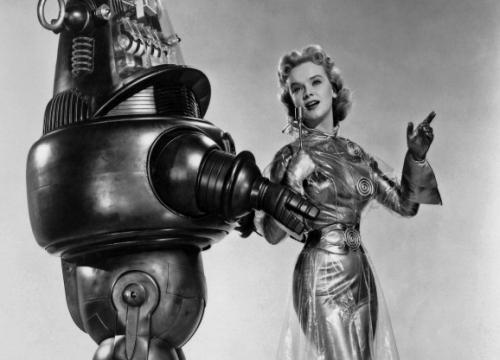 Anyone who has read Douglas Hofstader’s seminal book ‘Gödel, Escher, Bach’ will be familiar with the link between mathematics and music. So, do science and song really have a connection? When I was at uni, one of my brainy friends was busy mapping the DNA of the lesser-known Leopard Toad – he used the naming convention for the string sequences to write music...which he played on his saxophone. Now I’m not claiming it was good music, but the idea was interesting!

Despite the über-blandness that passes for pop these days, there was a time when thoughtful lyrics and witty commentary were commonplace. OK, the 80’s hit ‘Einstein A Go-Go’ by Landscape really doesn’t count! But there are plenty of other interesting songs about science. Music geeks in the UK were thrilled by the recent BBC programme about cosmology, presented by the divine Dr Brian Cox. Apart from looking like the progeny of a Vulcan and a Cyborg, the good doctor was actually was in a pop band called D:ream before he became a particle physicist! Clever, and tuneful!

And...If you want more music that meets the criteria of clever and tuneful, you could worse than listen to Vector Lovers brilliant ‘Girl + Robot’ or The Script’s poignant ‘Science & Faith’. Of course, anything by Orbital or The Chemical Brothers is both thoughtful and thought-provoking. Oh yes, and I guess it qualifies as techno-the musical trademark of geeks everywhere. At least you can dance to it!

The list doesn’t stop there, though. The 80s classic She Blinded Me with Science by Thomas Dolby, is a witty take on geek love. We are never quite sure if the lovely Ms Sakamoto referred to in the song is his teacher, or a love interest, but the lyrics speak to the pain of being a guy who is clearly out of his league in the jock stakes:

Plenty of other serious musicians have taken to writing about the scientific. Jarvis Cocker, the nerdy-looking aesthete from the band, Pulp writes movingly about lovers in a parallel universe in Quantum Theory.

This morning, when I awoke/ God was dead but I lived on/
I cannot move/ but I am free/
I found the source of gravity

Even the Beastie Boys have had a crack at nerd-dom. Now I know, they are not usually the first band that spring to mind when you think about science, but I must admit, I rather like the lyrics to Sounds of Science.

Now here we go dropping science/ dropping it all over
Like bumping around the town like when you're driving a Range Rover/
Expanding the horizons and expanding the parameters/
Expanding the rhymes of sucker M.C. amateurs/
Naugels, Isaac Newton Scientific E.Z./ Ben Franklin with the kite getting over with the key

Love provides the spark that lights the chemical touch paper as far as science-themed music is concerned. Just think Diana Ross and Chain Reaction, or Kraftwerk’s Computer Love. The world’s most talented scientists may conquer distant planets, and devise clever ways to re-engineer body parts, but they haven’t found a cure for love!