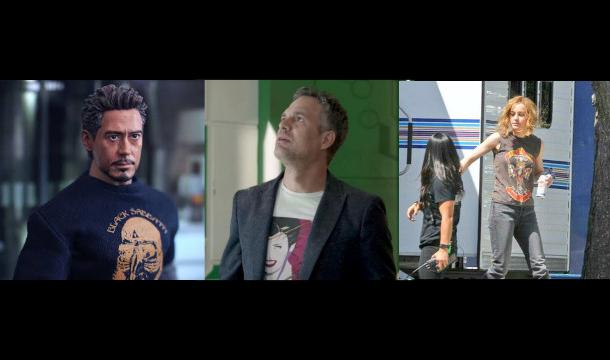 Honestly, how much of an intro does this post need? The title is right there. You know what those lazy bloggers at BuzzFeed do, they plop 20 user-submitted images and call it a day. Huffington Post, 20 tweets in a theme is a post. This post is about the best recent uses of soundtrack music hits in the Marvel Cinematic Universe (MCU). The difference is, we do it with love!

This wins the prize for most mandatory soundtrack intro to a character's entrance. I mean, it's not like general audiences are going to rock out to "Ja, Vi Elsker Dette Landet." A Norse god demands a Led Zeppelin song specifically about Norse mythology. The Zep did all kinds of songs based on mythology, legend, and even fantasy fiction. They were basically the world's first and greatest Renaissance fair band.

We've got a lot of movies to shovel through, and this is almost an offhand example anyway. But we gotta point out, it does sound like moving to New Asgard, especially now that the Hulk has chilled out. Happy little tune, and also a better gateway to explore The Kinks than "You Really Got Me."

A little back-story: Paul Rudd's character is on house arrest, which is why he leans out the door at a goofy angle. He is free to go in a week, so he whiles away his time to the Partridge Family TV show theme, "Come On get Happy." Just for the simple-minded irony of a man locked in at home joylessly folding paper origami cranes, but holding out well until the end of his exile.

Guardians of the Galaxy (2014) - Redbone Come and Get Your Love

Our award for biggest fake-out MCU song. All that grimdark opening, and then a Sony Walkman tape cassette and Redbone. Completely 180s the mood! Could have been a car commercial. But they go farther from there, even having Chris Pratt snatch up one of the local sewer rats to use it as a microphone while he lip-synchs to the lyrics! Kind of a jerky move from the rat's point of view, but eh.

Yes, thank you, we know. Iron Man's introduction to AC/DC's "Back in Black" is the one song that makes everyone's MCU faves list. We know. We also know that Robert Downey Jr. is a flippin' genius actor who could star in a grade school spelling bee and still make it fascinating. The entire MCU owes Mr. Downey a debt of gratitude, because he gave it such a kickstart with his portrayal of Tony Stark.

We'll go with the funniest MCU soundtrack usage. Again, Robert Downey Jr. brings the house down with just one line that snaps into a medley of songs, which played differently from the ones used in the trailer (the overused "Hooked on a Feeling"). Instead, he orders the DJ to play music to kick his buddy's ass to. The DJ queues up Queen on top because he is a good DJ and does not want Mr. Stark to fire him.

Just a little shimmy out on stage with an intro tune from Average White Band. It's a noticeable piss-take on high-tech corporations and their grandstanding CEOs giving shareholder seminars. In fact, the MCU is practically teaming with parodies of Silicon Valley aerospace and defense contractors. Especially our Iron Man examples.

It's The Coasters oldies hit, but we music nerds would like to point out that the dynamic Brill Building duo of Jerry Leiber and Mike Stoller penned this piece, and even describe how they wrote the song by basically messing around at the office in the biography Hound Dog. Sung here, a cappella, it's a hilariously awkward moment stuck in TVLand.

Didn't expect that because you forgot all about Wandavision already, didn't you?

Marvel fans, what did we miss? How about classic Marvel universe productions, are there any outstanding music examples back there? There's comments to this here site, just like all the old time blogs.