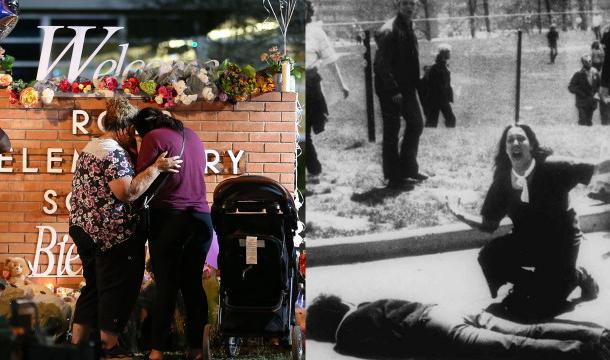 On May 24th, 2022, a defining incident of graphic violence occurred which may prove to galvanize people to take action. Happening so soon before the US Midterm elections, there is nearly a guarantee that Uvalde will be fresh in our political discourse. The shooting at Robb Elementary School stands out from similar incidents (sadly common in this country) due to the chain of failures that piled up:

Just a couple of years ago, we had the massive nation-wide reaction to the murder of George Floyd. Riots broke out across the country, sometimes even overrunning law enforcement to a degree where zones of anarchy (the "Capitol Hill Autonomous Zone") temporarily sprang up.

Are we ready to do it again? Maybe, or maybe the rage will be swallowed and suppressed until it can be manifest in the ballot box. They're calling on the president to do something now. Indeed, Biden himself has responded positively already. (Disclaimer: this story is still unfolding as I write, as always.)

In the interest of instruction (and tying this into music, because this is a music blog, if you're just checking in), it is worthwhile to contrast another famous incident involving a shooting at a campus, one which has echoed throughout our history ever since.

The Kent State shootings happened when the Ohio National Guard were called in to quell a student protest at Kent State University. The conflict, in which the students were unarmed, led to four students shot dead by the National Guard and many more injured. The students were protesting the US-Vietnam War at the height of Cold War tensions, so this incident just blew the issue up to 1000x the magnification it had previously.

The social and political fallout from this incident was immense. For one thing, it helped finish cooking then-president Nixon's goose, impeached three years later. It prompted cult sci-fi author Harlan Ellison to dedicate a whole book to the Ohio four. Dozens of films, documentaries, and TV news specials covered the aftermath.

And of course, politically-aware musicians wrote songs about it. About 70, give or take a few chords.

That's just to name a few of the more prominent examples. In fact, tributes to the bravery of Ohio State students (many more were injured outside the four killed by the National Guard) are also found among the much larger realm of Vietnam War protest songs, in this handy list maintained by a whole dedicated project.

Don't get us wrong, we do see modern musicians taking to the stage to slam out protest songs all the time. "Protest music" is not its own genre now like it used to be. Nevertheless, some musicians do nothing but political songs. Even whole genres, like Punk, tend to be half-political commentary.

But in 1970, what we lacked were 999 digital sources of streaming music 24/7. People got their music mostly from the radio, and that little broadcast monopoly played only the top charting hits. So it was different then when you had the day's most popular top artists dedicating a song explicitly to an event.

The difference between then and now is that it's easier to tune out nation-wide sentiments. There's a billion million zillion channels we can all switch to. You can make all the protest songs you want, and even get millions of views, and not impact the general mainstream public consciousness now. The Internet changed what "fame" means forever, as I laid it out in my own story of "How I Accidentally Became A Writer."

But the message of the Kent State songs to take with you, when you think about the tragedy of any shooting in the modern day, is that the people once came together in a very different way. The medium has changed, but the spark is still there.

Social media, the part of the Internet where everybody yells at everybody else, is DOMINATED right now by people yelling about Uvalde. So the protest is there, with less of it set to music. People are no less aware and driven to change the course of atrocity than they were in 1970, they just bang fewer tambourines while they're at it.

Neil Young is still making music; perhaps he will yet make a song about Uvalde too.