5 Best Original Song Nominees That Were Robbed Of An Oscar 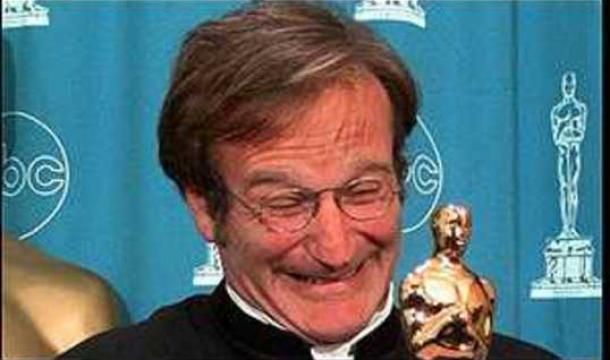 From the carefree funk of Pharrell's "Happy" to the emotive stadium rock of U2's "Ordinary Love" to the intimate lullaby of Karen O's "Moon Song," the Academy can't really go wrong with whichever Best Original Song nominee they choose to award this year's Oscar to. But over the last 20 years, the category has become renowned -for ignoring anything vaguely contemporary in favour of the mawkish, the middle-of-the-road and the mediocre. Here's a look at five tracks that were robbed of a golden statuette.

Her bizarre-but-brilliant white swan dress may have grabbed all the attention back in 2001 but Bjork didn't arrive at the Oscars merely to lay an egg on the red carpet. Indeed, she should have been there to pick up a gong for the standout number from Lars Von Trier's harrowing musical, a breath-taking blend of Vespertine-esque strings, digital beats and Gregorian chants which helped her tragic character Selma to come to terms with her blindness. But instead, the Icelandic maverick was denied the chance to make another 'grateful grapefruit' speech and had to watch Bob Dylan and the unremarkable grizzly blues-rock of Wonder Boys' "Things Have Changed" pick up the trophy instead. -

You have to give some credit to the traditionally conservative voting panel for at least acknowledging a song which describes Anne Murray as a bitch, uses the F-word as a punchline and satirically trashes a whole nation. But performed by Robin Williams at the 2000 ceremony, the Broadway pastiche that is "Blame Canada" was perhaps just too big a curveball to receive the actual prize and Phil Collins' dreary Tarzan ballad "You'll Be In My Heart" was given the nod instead. Unsurprisingly, Trey Parker and Matt Stone didn't let the matter lie, later mocking the former Genesis frontman in an episode of South Park which concluded with the Oscar being inserted into his rear end.

Famously leading to host Jon Stewart's quip that Three 6 Mafia had more Oscars than Martin Scorsese, the Academy unexpectedly got down with the kids in 2006 when they rewarded the Memphis hip-hop outfit's contribution to the Hustle & Flow soundtrack. But far from the triumphant Rocky-esque anthem of the Oscars' first hip-hop winner, Eminem's "Lose Yourself," "It's Hard Out Here For A Pimp" was a disappointingly formulaic affair. And although Jack Nicholson expressed surprise at Crash's victory over Brokeback Mountain for Best Picture, few would have complained if Bird York's gorgeously atmospheric ballad, "In The Deep," had boosted the controversial interweaving drama's awards tally.

Possibly one of the most entertaining songs ever to be nominated for an Oscar, Ray Parker Jr's US Hot 100 chart-topper "Ghostbusters" was the perfect theme for the 1984 supernatural comedy, has become a staple of Halloween and has since been covered by everyone from Run-D.M.C. to Hoobastank. But alongside another classic 80s soundtrack hit, Kenny Loggins' "Footloose," the ghoulish synth-pop classic was denied a gong by arguably the lowest point of Stevie Wonder's career, The Woman In Red's soppy and over-sentimental love song, "I Just Called To Say I Love You."

The likes of "Smell The Glove" and "Tonight I'm Gonna Rock You Tonight" might have been criminally overlooked but the team behind This Is Spinal Tap finally got the chance to get their hands on an Oscar when "A Kiss At The End Of The Rainbow" received a nomination in 2004. Performed by Eugene Levy and Katherine O'Hara at a pivotal point in A Mighty Wind, the folk parody was the perfect mix of sincerity and satire. But the Oscar jury presumably suffered a sense of humour bypass and instead gave the award to Annie Lennox's pompous Lord Of The Rings lament, "Into The West."