We're Sorry to Have Ignored Ignore That Door Before 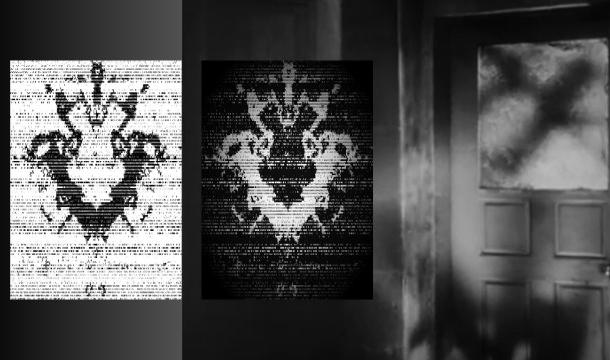 It isn't every day that we get to squirm such a slithery title past our desk editor uncontested, but Ignore That Door is just that kind of band. Really, you music geeks are all welcome to gather around and try to explain Ignore That Door to each other, see what you make of them. I'm doing my best to wrap my tiny little walnut around them.

One way to know Ignore That Door is to heed their motto: "We make dark music for dark times." Indie-est of indies. 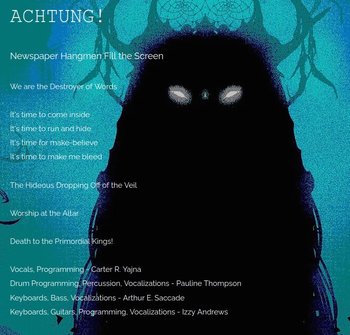 Next, we'd say something music-bloggy here like: "They're an ambient electronic band." But, in 2022, that description is hopelessly generic. Would you call both Beethoven and Elton John "piano music"? Yes, Ignore That Door produces post-industrial electronic music… but they play instruments sometimes, write actual lyrics sometimes, compose trippy videos… and even when their sole wavelength happens to be pure ambient electronic music (atmospheric synthesizer, drone loops, the doohickey that goes "hRRmmmmmm," etc.), they take it in dramatic directions down rabbit holes and out through cuckoo clocks, happily bashing down the barrier between any two genres or even art forms wherever they find it.

But you see how bad I am at explaining this? Here's Giles Bennett, a colleague of mine in this here bloggin' business, in whose capable hands I entrust thee for a paragraph:

> "Electricity sparks along the tracks and a hiss denotes, “All Aboard.” Within moments the landscape is coursing by at an uncomfortable speed, the ambient darkness obscuring any landmarks that might act as an anchor of perception, but you know you are moving. Quickly. Other vessels hotfoot madly along the grid-flow, noticeable only when crossing your path or shunting up alarmingly closely on either side as they hurtle from station to station. A mechanism rattles out neon plinks, like a tack-hammer smacking irreverently along metallic grooving. A siren warms up in the darkness, rising above the orchestrated cacophony—before rendering the ’scape into limping remnants of what came before. Then a dead Martian intones, “Baby…”

Music for Misanthropes Volume Two by Ignore That Door

Yep, Giles really said all that when reviewing Music for Misanthropes v1 - M4M V2 has dropped here. We won't bother to match Mr. Giles Edwa- ah, Mr. Giles Bennett's gold-plated and curlicue prose in attempting to describe this creative landscape. I have to paint with a broader brush or I never get done in time for dinner.

Ignore That Door even explain themselves: "We make art. Mostly music, but we also write stories, make short films and create visual art." Look at that sentence! No Oxford comma, like a boss! These guys are off the chain!

Then there is their YouTube channel, which shows off Ignore That Door' visual effects side. "Killing in the Name Of" delivers a gut punch when accompanied by video riot footage of cops vs. citizens, including what I could swear is the Rodney King beating. We switch moods from that to the gleefully macabre strains of "Triskaidekaphobia"* (fear of the number 13, as opposed to paraskevidekatriaphobia, fear of Friday the 13th. The more you know!) playing over vintage spooky cartoon and newsreel footage. How do you describe that music? Punk cabaret burlesque? It flirts with the border of witchhouse, if I'm not mistaken. And why limit themselves to video? There are alleged to be as many as four core members of the Ignore That Door artistic-hivemind collective hiding in this photo, which looks suspiciously theatrical: 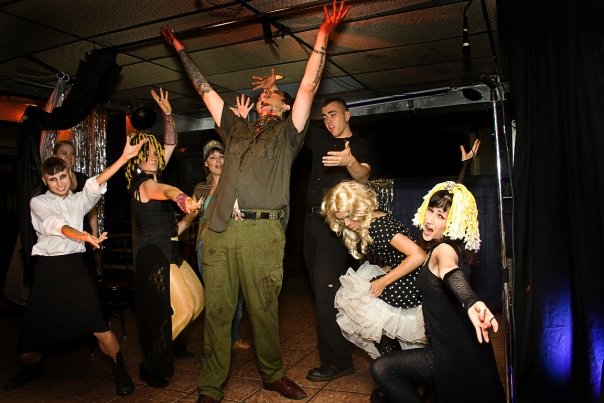 Wait, I almost forgot to mention they collaborated with a colleague, Giles Edwards* (and fellow podcast fiction and 366WeirdMovies alumni with yours truly) on a reading of H.P. Lovecraft's "the Shadow Over Insmouth." They go hard industrial here, with chilling, spine-tingling chords hammered into your cerebellum at intervals of downright sadistic timing, then shake maracas in your headphones like the rattling bones of Old Scratch wielded by a Santeria priest. I have heard Lovecraft narrated aloud a hundred times, and I still can't believe I survived listening to Giles & Ignore That Door's production without a burst ticker. I can only handle that level of intensity in 15-minute spurts, and then I have to pause until I stop panting from the adrenaline squirting out my ears.

Ignore That Door pull these multimedia stunts all the time, faster than you can digest all the encoded layers of deep meaning in the previous work. The Canadian group seems surprisingly reclusive, but that's an inevitable side effect of pumping out multimedia art at such a ferocious clip. They basically live in the studio, and let their work speak for itself.

Ignore That Door are impossible to ignore!

Were the late rock journalist Lester Bangs (if you remember from last week's article) have lived to see our present time, he'd be old and somehow even grumpier, but I'm curious to know what he'd make of Ignore That Door. Maybe he'd thumb through a playlist like Guidebook to the Upcoming American Apocalypse, encountering tracks with head-on collision titles like "Discount Hitler and the Walmart Reich," "March of the Patriotic Zealots," or "Death to the Primordial KIngs,"

In short, Ignore That Door is too fast-moving for us normal mortals to scout their tracks. But every now and then I am tempted by vanity to think that I have finally grasped the wavelength that they're on, when I find tracks like the autistic, twitchy hypnotism of "Air." Combining ambient dread with bleak industrial aesthetics, and yet with the playfulness of a kid in a sandbox. They have a sense of humor, just a dark one. For dark times.