The Art of Self-Indulgence 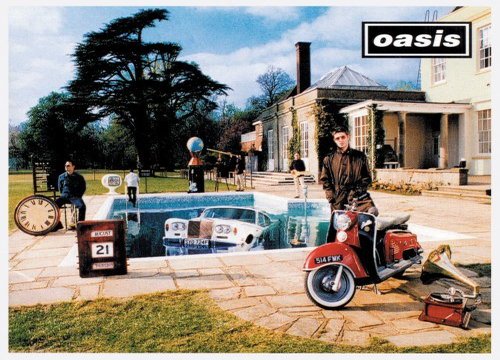 It's fair to say that expectations were high when Justin Timberlake announced he was finally putting his mediocre film career aside to release his first studio album in seven years. After all, this was the man who managed to turn from curly-haired boyband dweeb to the new King of Pop within the space of two years. But as everyone has since found out, The 20/20 Experience is unfortunately far more The Love Guru -than The Social Network -- a lazy, derivative and cliched mess that even with just ten tracks, clocks in at a ridiculously flabby 70 minutes. But of course, he's not the only superstar to let his ego get the better of him. Here's a look at five other mainstream records which badly needed someone with the balls to step the artist aside and just say 'no.'

Where better to start than with reportedly the most expensive album ever made and one with possibly the lengthiest gestation period. Indeed, even Kate Bush was probably telling Axl Rose to get a move on when after fifteen years, multiple delayed release dates and a merry-go-round of line-up changes, Guns N' Roses still hadn't delivered their follow-up to 1993's The Spaghetti Incident. Eventually trudging into stores at the end of 2008, Chinese Democracy was inevitably never going to justify the wait. But even so, it was still shocking at just how bewildering, unfocused and bloated its 14 hopelessly dated attempts at nu-metal were.

Christina Aguilera-- Back To Basics

Renowned for her ear-shattering foghorn vocals, The Mickey Mouse Club's second most famous female graduate has never quite grasped the whole 'less is more' concept. But she outdid herself on 2006's Back To Basics, a mammoth double album featuring 22 tracks, not one of which was even half as enjoyable as "Genie In A Bottle." Indeed, despite the presence of hit-makers Linda Perry and Mark Ronson, Aguilera's determination to establish her serious artiste credentials resulted in a self-important and charmless endurance test that even her most ardent admirers struggled to persevere with.

Most music critics ended up with egg on their face when after slating (What's The Story) Morning Glory?, Oasis' second album went onto become one of the most ubiquitous and iconic records of the mid-90s. Presumably burned by their kneejerk reaction last time round, they then treated the Gallagher brothers as the second coming when their follow-up, Be Here Now, arrived in 1997. But recorded amidst a haze of cocaine, its overblown guitar solos and lumbering lad-rock melodies virtually killed off the whole Britpop movement in one foul swoop and Oasis were never treated with anywhere near the same reverence again.

You have to admire Alanis for refusing to do what many artists who sold 33 million copies of their last album would do and simply make Jagged Little Pill v2.0. But her follow-up's title alone was enough of a warning sign that she'd perhaps gone a little too from one extreme to the other. Packed full of idiosyncratic and downright incoherent psychobabble, Supposed Former Infatuation Junkie might have been a cathartic experience for its creator, but it was a largely unlistenable and hugely disappointing tune-free racket for everyone else.

Sting-- Songs From The Labyrinth

With his penchant for tantric sex and patronising messages about the environment, Sting had already garnered a reputation as one of the most pretentious men in rock. But with 2003 LP, Songs From The Labyrinth, it felt as though he was deliberately trolling his many critics by recording 26 compositions written by 16th-Century Renaissance composer John Dowland entirely on the lute. Amazingly, the tumbleweed that greeted its release didn't deter him from more classical ventures with 2009's If On A Winter's Night and 2010's Symphonicities also proving just how far he'd disappeared up his own backside.