It's For You - Songs About Phone Calls 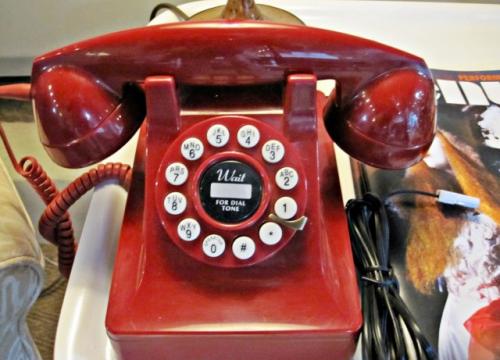 Ever since Lady Gaga's "Telephone" and the ensuing hysterically fun video (chock full of Quentin Tarantino references), we've been wondering if we could compile a list of songs centered around one of modern society's favorite inventions. And the answer is no - there are so many songs about cell phones, telephones, phone calls, answering machines, and even pagers that we couldn't possibly cram them all into one post.

Here, instead, is a selection of some of the more famous examples. Remember, we expect you dutiful readers to leave a comment afterwards telling us you-can't-believe-we-missed-this-one. There's just too many examples to consider. But that fact alone says something, namely that the telephone is one of the central inventions important to human social interaction. Most songs about phone calls have something to do with love stories - after all, who wants to hear a song about straightening out your billing mistakes with the gas company? So this goes to show that teens today hooking up by dialing up are no different from their grandparents who had to use that funny-looking black thing with the cords and the strange numbers like "Pennsylvania 6-5000".

"Call Me" and "Hanging On The Telephone" - Blondie

Blondie scores a two-fer here. "Hanging on the Telephone" was an early single score for Blondie in 1978, but was originally by another band called The Nerves. "Call Me" was a bigger success at #1 in 1980.

Starts with an appropriate ring, and in fact the whole song is mostly J.P. Richardson acting out one side of a phone conversation to a presumed girlfriend - only the chorus is sung. Oh, and no less than Jayne Mansfield recorded an "answer song", called "That Makes It", featuring the girlfriend's presumed end of the conversation. Answer songs were quite common in the oldies' days, but that's a whole other post.

His majesty, The King of Rock and Roll (hallowed by thy name), Chuck Berry recorded this humorous take of crossed hearts and lines, with what was at the time a very modern metaphor; the predicament of wanting to connect with your sweetheart but being unable to do so because you lost the number.

As we've mentioned before in our music-inspired fads post, 867-5309 was the number you did not want to have when this song came out. Hordes of giggling kids would call asking for Jenny.

"I Just Called To Say I Love You" - Stevie Wonder

This is one of the best examples of a phone-call love song. Words cannot convey what a tremendous hit this song was in 1984; it hit #1 simultaneously on charts around the world. Every station played it, variety shows parodied it, award shows honored it, David Letterman joked about it, malls blasted it on the speakers. Those of us who lived through 1984 still have little music-note-shaped dents in our temples from this song.

Probably the most famous example before Stevie. At #4 in 1974, it was also their biggest charting hit, although Steely Dan has never been defined by chart performance. And unlike other examples, the band asserts in a 2004 Entertainment Weekly interview that there was, indeed, a real-life Rikki and she really did receive Donald Fagen's phone number.

Ha! You thought you'd escape it in this list, but you're wrong, wrong, WRONG!!! The Internet tortured us with this song in 2004 and now we'll never let the Internet forget about it. In any case, this song was the title track of a children's album released in 1994 by Raffi (born Raffi Cavoukian). Here's the YouTube link, in case you want to start circulating it on message boards again.

We saved the best example for last, because this novelty song is a golden little piece of history. Discover it on the Mad Music entry, and listen to it here. There was a transitional period between corded and wireless phones, you see, and having a phone built into the car was a good trade-off in 1990. But even then, you can see the public's perception of mobile phone users beginning to form - stuck up, self-obsessed, and prone to accidents. Lots of yuppie hate here, along with a Southern California setting that ensured heavy play on Western stations.

Hey, quit reading this post on your phone and look where you're driving! You going to crash into that -