Five Weird Musicals To Watch Along With Rocky Horror 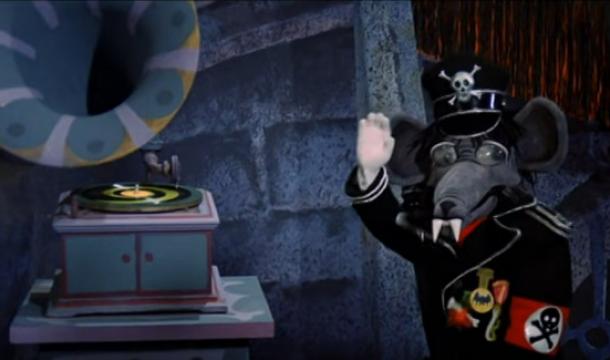 Well here it is again, kids! It's Halloween time, and that means to dress up in your kinkiest leather and go to the nearest midnight-movie theater showing of The Rocky Horror Picture Show (1975). It's a Halloween tradition, like It's the Great Pumpkin Charlie Brown! for adults.

But we're not going to waste space, time, and reader patience going over how great Rocky Horror is. You're a Rocky fan already or you wouldn't have been fished here by my clickbait title. I promised you candy and you're going to get it. Just stay awhile and listen.

And folks, if you're about to challenge me about "No movie out there is like Rocky Horror!" - I'm sorry, but you might have been living in a time warp. Take a jump to the left of the Blockbuster video aisle and step to the right over here while I show you a few musical movies good enough to date Rocky. Seriously, Dr. Frank-N-Furter would like these movies. More or less.

On the packaging, you would never expect PufnStuf, the movie version of the Sid & Marty Krofft's signature TV series H.R. PufnStuf to be Halloween themed. Then you remember Witchiepoo, played to demented perfection by Billie Hayes. The plot of PufnStuf just so happens to center around an annual world-wide witch's convention meeting at Witchiepoo's castle on Living Island. That adds up to, well, you can imagine, a lot of witches and a ton of witch in-fighting. And songs:

Pay no attention to the heiling Nazi rat. He's on the losing side, predictably. If you can't smile while watching PufnStuf for Halloween, you were seriously deprived of candy.

You want Halloween horror vibes? This was directed by Brian de Palma, of Carrie fame. You want musical? It stars THE Paul Williams, of "An Old Fashioned Love Song" fame, and he wrote the whole dang score. It's a second-cousin homage to Phantom of the Opera, only this time the guy's mask makes him look like a robot chicken only it's a gimp that escaped the pawn shop basement in Pulp Fiction. And it has this song:

Yeah, once you add up all the elements, the fact that Phantom of the Paradise is a worthy disruption to Rocky's place on the pumpkin throne just hits you like a plunger to the face (0:56). One, one more thing: It came out one year before RHPS.

OK, I cheaped out a bit on this one, like a shameful Dollar Tree last minute candy run. It's not a complete movie, and is very kid-safe. But… It's a Halloween Musical that literally has all the Halloween canonical monsters in it. Now for those of you who didn't catch this Rankin-Bass classic, imagine how you'd do the theme song to Mad Monster Party, then behold what actually came out as the theme:

Ethel Ennis doing a Broadway-style torch song was probably not your first guess. Not for a movie with Phyllis Diller in it. And while Mad Monster Party is still not as decadently adult as Rocky Horror, it was written by Harvey Kurtzman, who also drew cartoons for Playboy magazine. So there's that rabbit out of the hat.

I'm honestly not sure how long you can be a Rocky Horror fan and not bump into The Apple eventually anyway. A mere accident in history or two must be the only reason midnight showings of The Apple don't have the people dressing up in costumes and singing along on stage. Same music era and genres, same utterly campy attitude, and what the hell, The Apple is just plain crazier than Rocky Horror.

Please don't hurt me. I can feel the fan tension out there. Forbidden Zone has its faults, I'll grant you that. For one thing, it does have a dash of offensive scenes which, in its then-current trend of thumbing its nose at political correctness, went too far. The director himself promises to digitally change those few scenes to make it more crowd-friendly. Once you understand the justification for it (a parody of pre-Hayes-Code 1930s culture), it makes sense in context.

Now that we threw out the bad apple, the rest of this movie is a TOTAL MIND_MELTING BLAAAST! Look, you all love Danny Elfman or you wouldn't be reading this far on a music blog. Not only did Elfman write / arrange all the songs, as well as hand-pick previously written songs, but he plays a role in the film too. And on the Rocky Horror decadence scale from sweet transvestite to Satanic mechanic, I'd have to give Forbidden Zone a 9.5. Very NSFW, tons of nudity, simulated sex, gross-out humor, the works.

Can you guess? Go ahead, guess what role Danny Elfman plays in Forbidden Zone. No, I can hear you clicking the 'play' button, guess first! Go on! Why won't you guess? Why must you fail me so often?

Not a movie at all, just a very short cartoon / music video that aired on MTV. We have to mention it every time we mention Danny Elfman and Halloween on the same page, or else ancient Lovecraftian monsters awake from the center of the Earth and hatch the planet's shell to devour humanity.

Is The Rocky Horror Picture Show really that perfect?

Well of course it is!

Buuuuuuuuut: I'm sure anybody who cares has watched this a thousand times, enough to notice the tiny flaws start to come through. How it takes a while to get rolling. How Frank-N-Furter's angst and endless slow bummer songs do bring the mood down occasionally. Rocky himself being such an uninteresting character, even though that's exactly what you'd expect from a mad scientist building his own animated sex robot.

No, none of the above movies are perfect, either. But let's face it, Rocky Horror is just - to quote Greg Smalley - "a weekly excuse to shed inhibitions, cross-dress in public, and scream good-natured obscenities at the movie screen."

Do you really want to split hairs about what movie gets to be on that screen while you do it? Consider it this year for Halloween: Give Rocky Horror a double-billing partner so it's not so lonely. I promise, your trick will still think you're a treat!