Nelvana Entertainment and the Rock & Roll Road to Hell 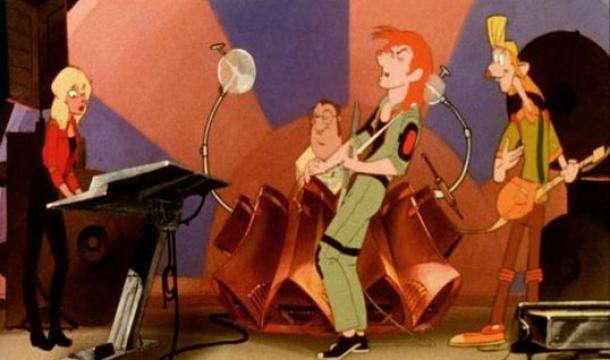 Strap on your helmet so you don't make a mess when we blow your mind, because we're about to show you that there's a continuous karass in pop culture history that connects Woodstock, Star Wars, Heavy Metal, the Beatles, and the Care Bears.

We begin with Nelvana studios in Toronto, Ontario, and a forgotten animated Halloween TV special from 1978, name of The Devil and Daniel Mouse:

In it, a pair of folk-singing mice despair of ever reaching fame and fortune, but the female of the duo slips into a Faustian bargain with B.L. Zebubb, an infernal record producer who isn't supposed to remind you of Don Kirshner more than a lot. Said mouse becomes "Funky Jan" and achieves '70s rock success in a hilarious montage of '70s parody, while abandoning her former partner, before the slimy Zebubb comes back to collect her soul. Former stage-mate Daniel holds a trial to contest her contract which they win through the groovy power of folk rock. The songs are by none other than the face of Woodstock himself, John Sebastian, AKA founder of the Lovin' Spoonfuls.

But Star Wars fans right now are experiencing a rippling disturbance in the Force, as if the animation was vaguely familiar but they can't quite place it. Does this entry at Wookieepedia help? That's right, George Lucas was a fan of Nelvana and tapped them to produce the animated segment of The Star Wars Holiday Special, we already covered it here.

Now for the Heavy Metal angle: Nelvana had a shot at producing one of the animated segments for the 1981 film, but declined this opportunity, probably because they sensed what a disaster it would become. Instead they set out to do something that could even be considered to be a far superior effort, 1983's Rock & Rule:

Rock & Rule is nothing less than a retread of The Devil and Daniel Mouse. This time a sinister aging rock star (who isn't supposed to remind you of Steven Tyler more than a lot) forcibly recruits a nobody performer with a magic voice to summon a demon, and her old crew comes to bail her out. But this time Nelvana went big: their round-up of talent now included Iggy Pop, Lou Reed, Debbie Harry and Chris Stein, Cheap Trick, and Earth Wind & Fire.

In this film, you can definitely see some influence from what Heavy Metal became, but with a far more coherent production and story line. Albeit, a story that's out of its mind. One in which a friggin' demon is summoned from a laser-light-show pentagram through the arrangements of a villain whose theme song is voiced by Lou Reed. Plus all of these cute little references, like the characters being just a touch of homage to Ralph Bakshi and when Angel and the demon meet for the first time, we get just a glimpse of a Fay Wray and King Kong angle. Yeah, just look at this movie: This is what Heavy Metal could have been!

But Rock & Rule was a financial disaster; Nelvana, a studio which got its start filming with a camera tripod over a toilet using phone books to stack up animation cels to simulate zooms, spent $8 million dollars producing Rock & Rule and it literally opened and closed overnight.

What bailed out the studio? Classic '80s Saturday morning cartoons, that's what. Starting from a gig producing the first season of Inspector Gadget, they went on to produce Herself the Elf, Strawberry Shortcake, and the whole Care Bears franchise. Their previous association with George Lucas even got them a spot on the Star Wars animated spin-offs, Droids and Ewoks.

Nelvana went on to even greater fame and fortune which still continues today, so, perhaps, in a narrative that parallels their early stories of performers who learned a Very Important Lesson about signing contracts presented by shape-shifting dudes with their heads on fire, they have earned their redemption. But let's linger on a bit more about the studio's early days.

Nelvana was founded by animator Clive A. Smith, whose previous by-line included working on none other than Yellow Submarine and the Beatles animated TV series. What, you didn't know that existed? Well, here's an episode: