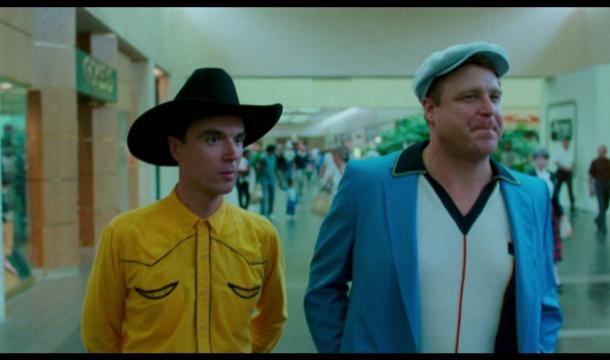 So what should my title imply, that movie musicals are usually for abnormal people? Well, yeah, sorta. In a strictly marketing demographic sense, musicals don't always do so well at the box office. So if you love them, you're less normal, by box office sales, than the mainstream. Also, you'd rather just go catch a play, stage musical, ballet, or even an opera if you want to listen to music with a narrative thread.

The other thing with movie musicals is that they don't usually appeal to mainstream music tastes, again in the "top-40 radio" sense. Rarely does a Broadway song reach your local radio. "One Night In Bangkok" was a fluke. That's why, in assembling a list of movie musicals for the mainstream, I'm picking those made by performers who are broadly popular beyond the realms of movie musicals.

And then we're going to narrow it down to the less-famous examples of the genre. You knew about anything by the Beatles or Elvis already, as well as the bigger rock operas. We're trying to make it worth your time here.

Likely to be the most recognizable title on this list, this eve-of-the-80s cultural landmark stands out for one reason alone: It has The Ramones. Which, don't get me wrong, the Ramones were always good and always had their following, but nowhere near the nostalgia-fueled status they get now. The Ramones were more of an acquired taste, forever slotted into the Punk category but actually being a greaser-50s garage-band throwback. Half American Graffiti, half Repo Man.

In any case, RARHS comes with bonus acts on top of the Ramones, like Wings, Fleetwood Mac, Devo, Alice Cooper, and Velvet Underground, to name few ringers. Tell me that isn't mainstream appeal, albeit dated?

Whether or not you're into this movie, the youngest entry on this list, depends on one of two things: Are you big on Melanie Martinez? Because the whole movie is pretty much her, in fact written and directed by her, so it's a one-person passion project. The other thing is, are you into art-festival-levels of weirdness? Martinez is a dark talent with a macabre undertone, and this is, after all, a horror film. The horror centers around big time gender-identity politics (preachy preachy all movie long), sort of like a school in the Handmaid's Tale universe, or like a 90-minute music video with a daylit gothic theme.

Talking Heads is the coolest thing ever, still hugely popular today, and a crowd-pleasing act throughout the decades. Plus they already have Stop Making Sense under their belt, albeit a concert film rather than movie proper. Here, this is mostly David Byrne's doing, a free ride through his unique imagination. Or as he puts it, "This place is completely normal." Of course, it's "normal" only from inside David Byrne's head; to the rest of us, it looks just like what you'd expect of Talking Heads: kitschy pop culture rendered in such crisp completeness as to be elevated to deadpan sarcasm.

Probably going to be the most popular entry on this list, so there's really not much need to sell it here. It does have a plot, but it's a throwaway excuse to introduce us to a cast of quirky characters in quirky situations to fit Talking Heads' style.

This is the one example on this list that does not feature prominent musicians. However, South Park creators Trey Parker and Matt Stone are so famous for their comedy that everyone simply forgets that they can write - and sing - a proper tune as well. As typical for their level of humor, this is a musical western about the infamous cannibal of the wild west. That's not going to turn out at all how you expect it will. Parker and Stone's star is fading fast, especially with their bomb South Park : Post-COVID series on Paramount+ slowly lying there stinking.

But longtime fans can tell you that Cannibal! The Musical is Stone and Parker at the top of their form. The whole movie is funny enough to run next to Blazing Saddles, and filled with toe-tapping songs in homage to Oklahoma and the golden age of westerns in its spirit.

Wait, I thought we said "normal" people? And Pete, you've raved about this movie what, two, three times now? Yes, but God, PAUL WILLIAMS, man! What are we supposed to do, just not mention him every chance we get? Williams is known and recognized with a cult fandom today, perhaps growing long in the tooth, but he deserves to be still widely known. He is the author of stunning hits for other artists, as well as a performer in his own right. The songs in this film are entirely by his hand, and he plays the lead antagonist to boot.

Definitely one of the abnormal movie musicals, but still enjoyably loony enough to have mainstream appeal because Paul Williams smokes the screen right off the monitor with his score, leading up to the greatest ending song ever filmed with closing credits over it.

That's the closest to "normal" your humble author can think of, while staying within the realms of movie musicals. For those with weirder tastes, you need to check out my list of weird movie musicals fit for a double bill with the Rocky Horror Picture Show. Now we're talkin'!