The Five Bands Most Frequently Mistaken For the Beach Boys 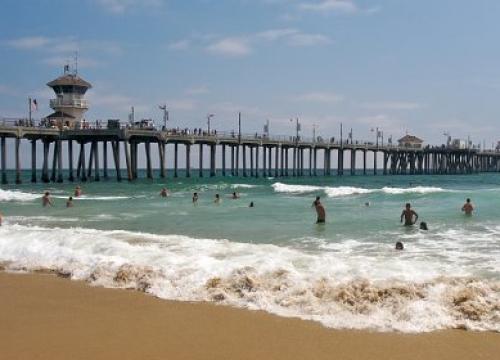 Now that Spring is here and Summer is just around the corner, at least a few of you out there will likely have beaches and bikinis on the brain. Surf music and summertime just go well together, even if you're just there to barbecue and play volleyball.

But all surf music is not shaped from the same mold. The Beach Boys, rightly the most famous band of this genre, are the most prominent example. But along with the Wilson brothers, a whole wave of surf bands (ha! wave! surf bands! get it?) crested in Southern California, especially Orange County. To this day, in O.C., you can cruise down Beach Boulevard all the way to the beach itself, and spot many landmark surf shops, hotels, and burger stands left standing from the age of surf rock. But enough about the times and genre, let's find out who else made surf music besides the Beach Boys!

Jan & Dean - You'd be forgiven for confusing these guys with the Beach Boys, since Brian Wilson wrote many of their songs. Amongst the many Jan & Dean songs arguably in the Beach Boys' style are "Surf City", "The Little Old Lady from Pasadena", "Sidewalk Surfin'", and "Dead Man's Curve". By the way, since we mentioned Orange County, one Jan & Dean song even mentions the city of Anaheim (home to Disneyland and a lot of run-down hotels) right in the title.

The Shadows - What, never heard of them? Well, you must not be from the UK, then, because they charted solid on the UK Singles' charts from 1960 to 1981, and nobody less than John Lennon Himself said of them that before The Shadows, there was nothing worth listening to in British music. Yet somehow, they managed to catch the tubular vibe of American beaches all the way from the UK. Getting to the sounds-like-the-Beach-Boys part, The Shadows' highest-charting hits were instrumentals, including "Apache" and "Kon-Tiki", both of which sound like they'd be equally at home on the Huntington Beach pier or a Quentin Tarantino movie.

The Chantays - Another instrumental surf group, formed from five students from Santa Ana, California (get used to Southern California, it is the cradle of surf rock). Their main hit was "Pipeline", a 1963 instrumental with a haunting, intellectual riff that suggests the adrenalin-defying concentration you need to pull off a ride through a pipeline (a wave that rolls over you forming a tunnel).

The Surfaris - With a name like that, you almost expect them to be a Beach Boys tribute band, but they actually gelled in 1962 in Glendora, California, only a year after Beach Boys formed and the same year Beach Boys released "Surfin' Safari". Their main claim to fame: "Wipe Out", which is one of the first examples of Beach-Boys-style surf rock everybody thinks of, but it's by the Surfaris.

The Rivieras - Surprise, it's another surf-rock act not from California. In fact, The Rivieras hail from the relatively landlocked state of Indiana, and yet this crop of Hoosiers get the privilege of being the band who did... "California Sun"... as in "they're out there havin' fun"...

So now the Beach Boys actually sound a little less famous, don't they? Ah well, you have some intellectual music trivia to pontificate over while waxing your boards now.