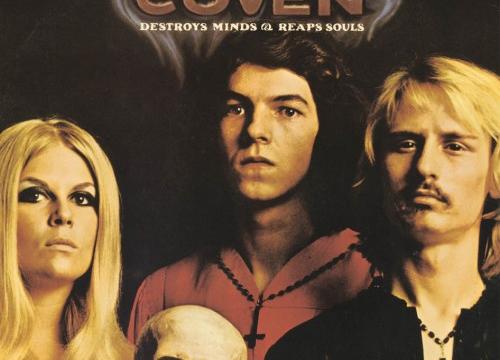 This business of writing about music sometimes has moments where you turn a dimensional corner into an alternate universe and discover some ancient artifact of a song, album, or group, clearly left here as a joke by some trickster deity, possibly one of the ones with tentacles and a maw of blood-blackened fangs. You've never had your sense of reality challenged, your curiosity intrigued, and your panic button tested like you're about to when you meet Coven.

In the first place, remember "One Tin Soldier"? Nice little preachy folk song of the anti-war stripe from the late-'60s/early-'70s, and it was the theme to the 1971 film Billy Jack. Actually, this song was originally done by Original Caste; Jinx Dawson, the lead singer of Coven, is half-Cherokee, so she was tapped to record a cover for the film, since the film is something about Native Americans. A lot of listeners confuse her with Grace Slick (Jefferson Starship), since both ladies have powerful voices that could shake dust from the ceiling of Moria. It became the most popular version and Coven's only hit, cracking #26 in 1971. OK, you have a lock on "One Tin Soldier" now.

That same band, that same nice young lady with the tonsils of brass, also did songs like "Pact With Lucifer" (farmer sells soul), "Choke, Thirst, Die" (apparently a horrible curse set to music), "Dignitaries of Hell" (what it says on the tin), and "Satanic Mass" (ditto). And that's their debut album, Witchcraft Destroys Minds and Reaps Souls, they were just getting warmed up. Here is the closest thing you can find to a complete discography of Coven, with lyrics to the songs on the first album.

Oh, they also did "Black Sabbath." In fact, it was the first song on the album. Yes, in 1969, when the band you know as Black Sabbath was still calling itself Earth. No, there's no relation between Coven and Black Sabbath; Sabbath is British, Coven is from Chicago, Illinois, and there's slim to no chance they had ever heard of each other at that point. Yes, the bass player for Coven was called Mike "Oz" Osborne, and no, he is no relation to Ozzy Osbourne of Black Sabbath. Oh, yes, and if you unfold the cover of the original LP of Witchcraft Destroys Minds and Reaps Souls, you'll find an image of a Satanic mass. With people throwing the goat's head.

The goat's head: make a fist with either hand. Now extend your index and pinkie finger, so it looks like a horned puppet. Say hello. Make it talk back. You're throwing the goat's head!

Except here's a whole bunch of people doing it in 1969, years before Ronnie James Dio or even Terry "Geezer" Butler (Black Sabbath alumni all) were shown doing it. In fact, here is The Immortal Lester Bangs Himself reviewing Black Sabbath for Rolling Stone: "...something like England's answer to Coven." Here, if you are prepared for an image both disturbing and indecent (it contains nudity), is an image of this cover. Why... is that, ah, Jinx on the altar? Um, could be!

Oh, but this isn't heavy metal. No, this is psychedelic rock, again more akin to the devil's own Jefferson Airplane than any of the black/ death/ thrash/ metal bands with a diabolical styling to emerge since. But the hour grows short - let's get to the rest of the mind-blowing facts around this group:

Had a missed connection with Anton LeVey himself. Was the subject of a smear article in the March 1970 issue Esquire magazine, which claimed that Coven was connected to Charles Manson and the Helter-Skelter murders, actually causing their record label to pull the album off store shelves. Was a favorite of Timothy Leary. Their song "Blood on the Snow", their title track from their third album, became produced into (what many are calling) the first music video in 1974... in partnership with Disney Studios.

Somebody at AllMusic seems to believe these claims too, and then some more.

It is also alleged that Jinx Dawson's birthday is January 13th and that she is the only survivor out of twins where the other was stillborn. At this point, we're so exhausted from verifying all of the other impossible claims that we'll leave the weird stuff about her birth up to fortune. But Coven is also, apparently, trying to make a comeback, having released a new album in 2008 name of Metal Goth Queen - Out of the Vault. Oh, Coven's MySpace page. If you go friend her, could somebody please ask her if she's pulling our leg with all this?