A Pantheon of Fictional Characters From Music 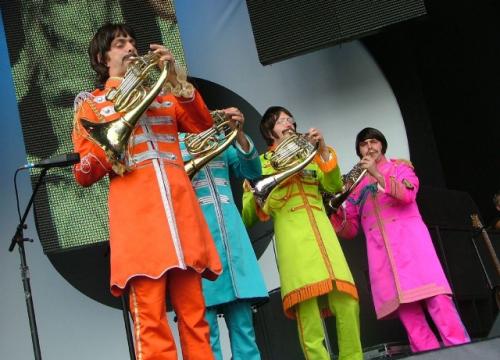 Sometimes songwriting is storytelling. And while most songwriters get by without weaving their tales very tall, others really put in the effort to create compelling characters and narratives, sometimes even spanning whole albums and careers to create a whole fictional universe that's internally consistent. Here, we'll take a look at some of these fascinating freaks of music, the character who only exists in song.

This is just the example of what we're talking about. George Clinton, godfather of both Parliament and Funkadelic, created a whole universe known collectively as the "P-Funk Mythology." Take a deep breath: Dr. Funkenstein is the intergalactic master of outer-space funk, who sends his emissary, "Starchild", a divine being who brings the holy funk. It turns out that the secret of funk was encoded in the pyramids because mankind was not ready for it until the modern era. Starchild's nemesis is Dr. Nose, who hates funk and seeks to place the whole human race under an evil spell called "the Zone of Zero Funkativity". And that's just getting started! Check out the whole discography and prepare to wrap your brain around some very long invented words in albums like Mothership Connection, The Clones of Dr. Funkenstein, Gloryhallastoopid, and a dozen others. Learn its secrets at The Motherpage. Even Larry Niven didn't create a science fiction universe this complicated.

The ever-weird David Bowie created the character familiar to most of you. Ziggy is another space alien sent to deliver a message (noticing a pattern here?) of hope for humanity in its final years. The whole thing was originally intended to be a rock opera, which would have either been a stage production or a TV show. That fell through, and we have this concept album whose whole name is The Rise and Fall of Ziggy Stardust and the Spiders from Mars. Uh.

Of course, we can't mention rock operas without citing the most iconic example. Tommy is born in 1941 to a pair of WW2-era American parents, who accidentally traumatize him by exposing him to the murder of the man his mother was cheating with. Tommy goes deaf, dumb, and blind, and evades all attempts to get through to him, but finds his purpose in life playing pinball. The Who pull this off with inimitable style.

Suzy Creamcheese - Frank Zappa and the Mothers of Invention

Suzy Creamcheese is not so much a continuous character as a running joke. Starting with Freak Out!, Zappa and the Mothers occasionally dropped her name in song lyrics or album sleeves, without really trying to make it make sense. There's a "review" of the Mothers by her on the back of Freak Out!.

One of the most lavishly detailed characters in music mythology, Alice Cooper's Steven character makes appearances on over a half dozen albums spanning four decades. Steven is a psychopathic serial killers who preys on women, and is probably a necro too. But see, his insanity stems from a traumatic childhood, which left him a little boy trapped in a man's body. There's a lot of fun theories as to whether or not certain songs belong in the Stephen canon; we won't interrupt the fun too much by trying to pin down what's what.

To close with the most famous example of all. Sergeant Pepper and the Lonely Hearts Club Band were a mock attempt by the Beatles to reinvent themselves. See, they'd gotten so famous that they didn't know if they were still good or not; they could put out junk and the fans would buy it anyway. So what if they had to go on their music alone, without being "Beatles"? This same inspiration is behind why the best-selling horror novelist Stephen King went by the pen name of Richard Bachman for a few books, as detailed himself in an essay titled "Why I was Bachman" - the essay cites the Beatles/ Sergeant Pepper example. But really, by the time it got to a concept album, it was just the usual goofy fun.